Recently, in Dongguan, Guangdong, a woman was trapped on the bank and unable to move when a man and a woman were fishing in the river.

When rescuers arrived, the woman was bitten on the leg by an unknown creature and lost consciousness on the left half of her body.

Rescuers worked together to free the trapped woman, who was then taken to the hospital for treatment. 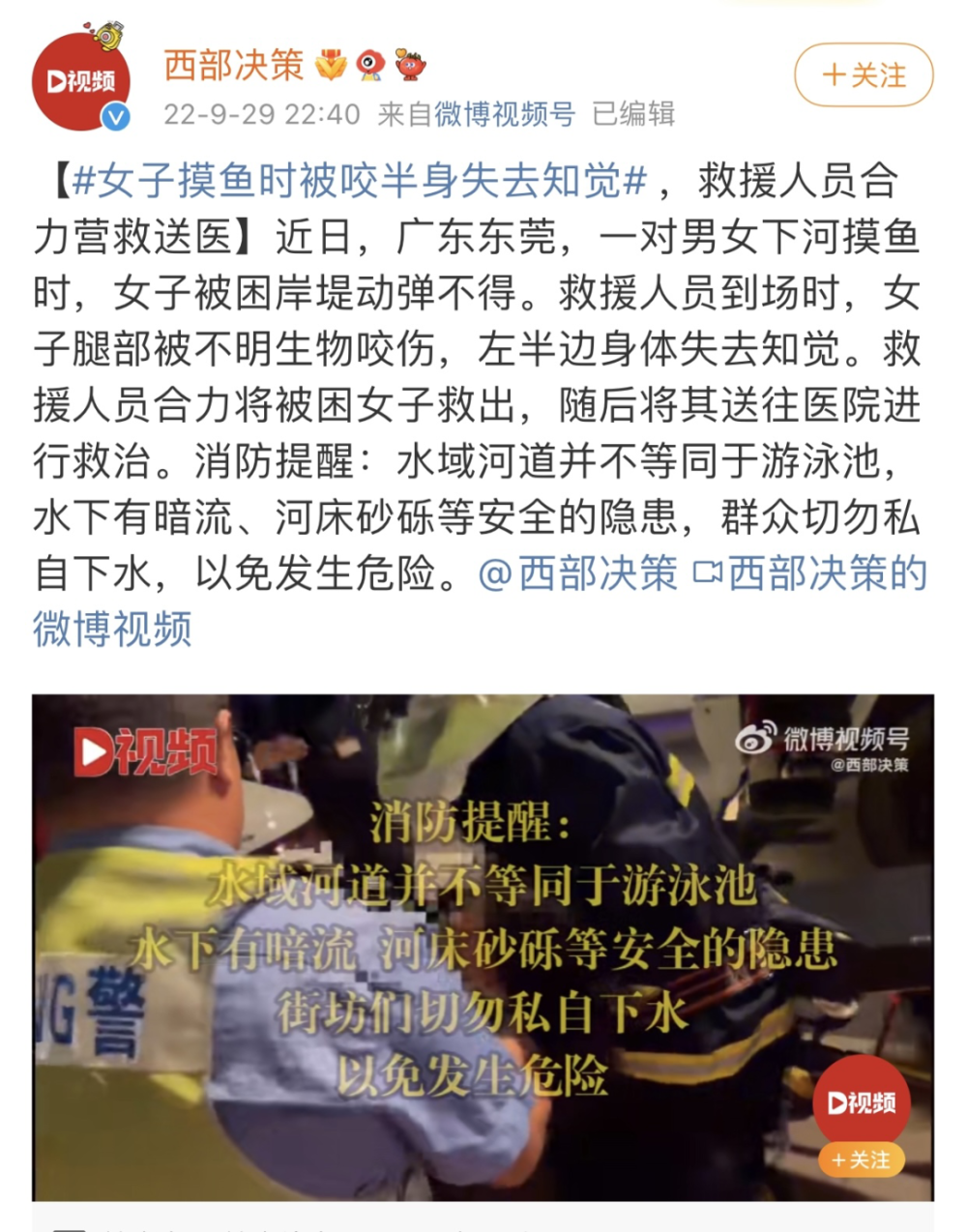 Actually, the loss of consciousness on the left half of the woman’s body was not related to the bite of an unknown creature.

Why can I say that?

First, the woman’s symptoms of loss of body sensation on the left side were not signs of poisoning from a biological bite.

If the unknown creature that bites the woman in the water is poisonous, the symptoms of the person after the bite, in addition to the local symptoms of the bite, should also be systemic. If the body There will be loss of consciousness, it should be the whole body, not just the left side of the body.

Secondly, the timing of symptoms after being bitten by an unknown creature is not right.

We know that at present, the most common organisms in our country contain highly toxic neurotoxic toxins, such as silver ring snakes, golden ring snakes and various sea snakes.

Not even a bite from a highly venomous krait will show immediate systemic symptoms, let alone other creatures.

Therefore, the woman’s loss of consciousness on the left side of her body has nothing to do with the bite of an unknown creature.

Ordinary people know that loss of consciousness in half of the body is often one of the symptoms of stroke.

Could it be that the woman just had a stroke at the time?

If a woman has a stroke, her symptoms are not just loss of consciousness, but often accompanied by hemiplegia.

So women don’t just have a stroke.

So what is the reason for the symptoms in women?

I think that the woman is likely to suffer from hysteria after being bitten by an unknown creature under strong self-suggestion, manifesting as a hysterical sensory disorder!

This is the only way to explain the woman’s bizarre symptoms.

In fact, we can often meet similar patients in clinical practice.

I met a similar patient more than ten years ago and cured him myself.

At the time, he was 42 years old and a farmer in Liucheng Township, Wuyi County.

It was the ripening season for the mountain kiwis.

That day, he went up the mountain to pick kiwis after the couple quarreled.

On the way home, he accidentally fell on the mountain road and fell to the ground.

After the villagers found out, they informed his wife to bring him back home. He said that since then he can no longer see anything.

Family rushed him to the local county hospital.

The doctor did a lot of physical and chemical tests on him, and no abnormality was found.

The CT scan of his brain showed no abnormality, so the doctor didn’t know why, and the treatment could not be started.

Therefore, the county hospital transferred him to our hospital for treatment.

His nephew, Dr. Pan, is my colleague and my roommate who lived in the same room for many years when I first started working.

I have operated on many relatives of his family, and the results are good.

Because of my roommate, I have been to his house many times to eat and pick kiwis.

As a result, he and his relatives had confidence in my medical skills, which was the key to subsequent treatment.

When he came to the hospital, his roommate took him to see Dr. Chen, an ophthalmologist in our hospital for examination.

The doctor checked his fundus without any abnormality, and all the nerve reflexes in the ophthalmology department were normal.

An ophthalmological examination revealed no organic disease in his eye.

The ophthalmologist can’t figure out why he can’t see?

His nephew felt that I had extensive medical knowledge and could often diagnose strange diseases, so he approached me to discuss what to do.

I asked for my medical history, listened to my ophthalmologist, and discussed it with Dr. Chen.

I then observe the patient.

I found that his eyes were always avoiding looking at me. At this time, I already knew: he was suffering from hysteria!

Although I am not a psychiatrist, I learned: suggestive therapy while attending medical university.

I asked him if he knew me?

He said he heard it, it was Dr. Wang.

I asked him, did you know I was an expert? Of course he knew!

I said that I am a great expert, otherwise Lao Pan would not have brought you to see me!

This is not for bragging, it is the key to healing! Establish medical authority in the minds of patients and give psychological hints!

I asked the nurse to take a 30ml 10% calcium gluconate needle and draw it with a 50ml syringe.

While the nurse was dispensing the medication, I ran to the dispensing room and whispered his diagnosis and treatment principles in her ear so she could understand.

If the nurse doesn’t understand the usage, when I give the patient suggestion therapy, the nurse suddenly says “Calcium Gluconate can’t be used like this!” That’s all for naught.

After doing this, I took the syringe with the medicine and told him: “This is an imported special medicine specially designed to treat your eyesight. I will give you medicine in person later. If the medicine is working, your throat will heat up, and you will force your eyes to open and your vision will be restored!”

I gave him a bolus after I had the nurse put him in the IV.

I pushed the medicine and asked him loudly, “Is your throat hot?”

My tone is firm and majestic, and generally patients will believe it!

I immediately shouted: “Okay, the imported medicine is working, you can definitely see it when you open your eyes! Do you see it?”

His blindness was cured!

Next, he vomited at the nurse’s desk.

The vomiting was a side effect of the bolus calcium gluconate injection, as well as the hot throat he felt.

Because of this side effect, calcium gluconate was once used as a classic suggestive therapy drug.

When I was in college, in the hysteria class of “Psychiatry”, the teacher once introduced the usage of this medicine in detail.

Unexpectedly, I started this therapy more than ten years after graduating from college.

The university foundation is solid, and it is often used for medical treatment!