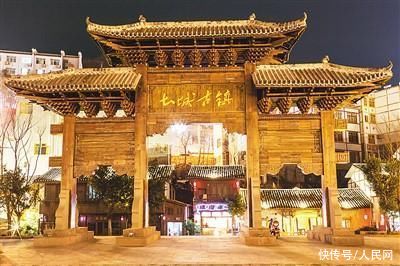 A view of Tucheng Ancient Town. Photo by Pu Jiaxing

The ancient town of Tucheng, Xishui County, Guizhou Province, is located in the middle reaches of the Chishui River, bordering northern Guizhou in the east and southern Sichuan in the west. It lives and develops on the Chishui River. It was the main wharf for Sichuan salt to enter Guizhou in the old days, and it is also a rare low-altitude valley town on the northern Guizhou plateau.

As soon as I stepped into the ancient town of Tucheng, this old street paved with bluestones greeted me with the unique moisture of the river valley. The wrinkled wooden plank houses can’t see the end at a glance, one is leaning against the other, it seems that it will collapse instantly when pushed by hand, but it has stood there properly for hundreds of years, becoming the evidence of the old times .

The local people told me that the history of Tucheng can be traced back to the Han Dynasty, and it has been thousands of years. During the Ming and Qing Dynasties, it flourished due to the introduction of Sichuan salt into Guizhou and the development of shipping. It is said that in the early days, there were many pedestrians on Tucheng Road, and merchants and gangs from south to north all settled here. Therefore, Tucheng left a culture of 18 gangs different from other places, such as the salt gang and the boat gang. , cloth gang, Pao brother… The tough guys in the rivers and lakes shuttled through the Chishui River and the ancient town of Tucheng, talking about heroism and loyalty, and maintaining the order of all walks of life. In 1935, the Red Army crossed Chishui on four sides and stayed there for more than 60 days, leaving a large number of red relics: the Sidu Chishui Memorial Hall, the Women’s Red Army Memorial Hall, the Red Army Hospital Memorial Hall… The traditional culture and the red culture intersected here, building a thick Tucheng. heritage.

The stomping sound of history is gone, leaving behind the story of the Tucheng in the past, which has settled in the depths of the ancient town. Stained with a little nostalgia, it is like the old things hanging under the eaves, or the letter paper full of gifts, or the handkerchief lost in the wind by someone around the corner.

Walking comfortably on the quiet old streets of Tucheng, and peeping at the traces it left in the vicissitudes of life through the slightest details. On both sides of the old street, there are blue brick and earth walls, wooden houses and black tiles, and carved doors and windows. The lines of the wooden house are simple and unadorned, and the moss creeps up the lower steps, and also spreads on the higher roofs. The years are extremely fair, regardless of the height of the house or the edge, they are all like the passage of the wind and the reflection of the water. The warm sun poured down from the top of the head, adding a sense of time and space to this thousand-year-old town. The old trees are mottled on both sides of the road, and three or two old people sit on the bamboo benches along the steps, either quietly in a daze, or closing their eyes to rest. I suddenly remembered a passage I once read: “If you visit me and I’m not here, please sit with the flowers outside my door for a while, they are very warm, I have been watching them for many, many days. They are not blooming, what do I remember? When you have nothing to say, even if you have green leaves.”

Yes, sitting like this, let the green leaves grow, what’s the big deal in this world?

The breeze was gentle, and the cloth and red lanterns on both sides of the ancient town swayed gently. “Look, the ancient town glutinous rice balls!” I did my homework before I came, and I knew that Tucheng had special delicacies, such as glutinous rice balls, spring rolls, and glutinous rice candies… Looking up, there was an inconspicuous roadside shop full of local people. Specialty, without doors or decorations, standing silently in the middle of a row of old wooden houses. The owner, wearing sleeves and an apron, sat on a bamboo bench in front of the store, busy making dumplings while no one was there. The dinner plate in front of her was filled with apricot-colored glutinous rice balls that had just jumped out of her hands. Beside her, a large pot was steaming hot on the fire, adding a bit of firework to this quiet old street.

The tables and stools in the shop are also the same color as the old street wooden house, dark brown, heavy, with a sense of age. We sat down on a bench and ordered two servings of local delicacies such as glutinous rice balls and spring rolls. The boss bustled around the fire, smiling on his wheat-colored face. The freshly baked glutinous rice dumplings are wrapped with oily and salty dried bean curd meat filling, served with refreshing spring rolls, and drizzled with two spoonfuls of chili water. The color of the sun and the mail of the horses and horses are both slow and the taste of the past.