At 13:35 on November 23, the Jinan Ring Expressway was invested and constructed by Shandong Hi-Speed ​​Group and undertaken by China Railway 14th Bureau Group One of the important control projects of the West Ring Section Project of the Second Ring Line (hereinafter referred to as: Jinan Daxi Ring Project), the swivel bridge across the Beijing-Shanghai Railway “turns beautifully” clockwise in the air, crossing the Beijing-Shanghai Railway and perfectly docking with the approach bridges on both sides, smoothly The completion of the rotation task has laid a solid foundation for the Jinan Daxihuan project to be fully connected.

At 12:35 noon, follow Under the order of the commander-in-chief on site, two continuous jacks slowly pulled the circular turntable with a diameter of 15.8 meters supported at the bottom of the bridge, driving the swivel bridge across the Beijing-Shanghai Railway to rotate steadily in a clockwise direction. After rotating 88 degrees, The 136-meter-long single-pier double-girder separated bridge body was precisely positioned over the Beijing-Shanghai Railway, running through the north and south of the railway, and perfectly connected with the approach bridges on both sides. The swivel construction was successfully completed. 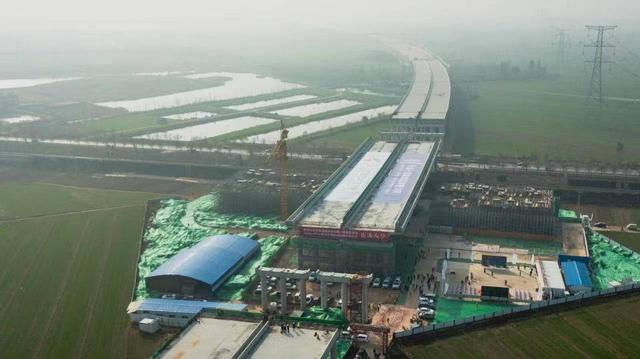 Swivel Bridge across Beijing-Shanghai Railway The upper structure adopts prestressed concrete T structure, and the span combination is (68+68) meters. The main pier of the lower structure adopts a “V”-shaped hollow pier design. The heaviest single-pier double-width wide-body swivel bridge without closing-long section in China, and the excavation of the deep foundation pit of the main bearing platform is close to the busy arterial Beijing-Shanghai Railway. With a depth of more than 10 meters, the construction process is complex and requires high precision.

In order to ensure a smooth rotation, the project company set up a special leading group to organize the participating units to carefully prepare the rotation construction plan, from plan demonstration to detailed division of labor, from on-site technical guidance to safety and quality management, in many aspects Strictly control, repeatedly simulate and review the data of the swivel, focus on strengthening technical safety guarantees, weigh, counterweight and test the swivel bridge, and monitor the wind speed, wind direction, rotation speed and beam body in real time during the swivel process Spatial posture, monitor the concrete stress at the pad stone part and build an early warning system, grasp the rotation parameter information and bridge posture in real time, and ensure the success of the rotation.

Jinan Daxihuan Project is an important part of the “Nine Vertical, Five Horizontal, One Ring, Seven Shots and Multiple Connections” expressway network in Shandong Province. It is a major construction project in Shandong Province and has been identified as the first batch of safe The century-old quality engineering creation demonstration project and the national major project publicity demonstration project pilot project were rated as expressway engineering quality management and four new technology application work experience demonstration projects by the Shandong Provincial Department of Transportation. The construction of this project is of great significance in improving the layout of the expressway network in Shandong Province, strengthening the radiating and driving effect of Jinan as the economic circle of the provincial capital city group and the core city of the comprehensive test area for new and old kinetic energy conversion, and driving the rapid economic and social development of the regions along the line.

News clue reporting channel: download the “Qilu Yidian” APP in the application market, or search for the WeChat applet “Qilu Yidian”, 600 journalists in the province are waiting for you to report online!