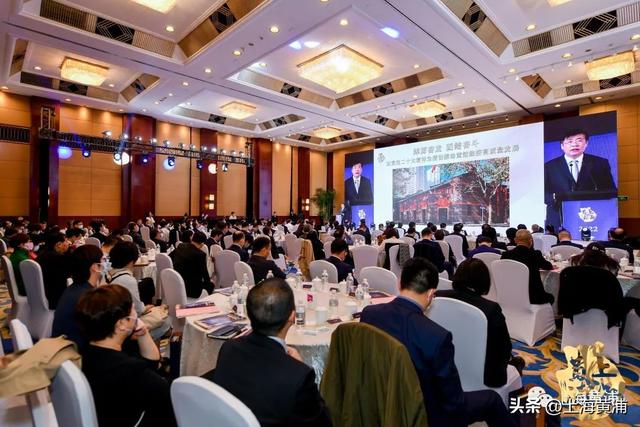 This symposium aims to enhance the sense of gain and honor of key enterprises in the region by commending advanced and encouraging contributions In the new era and new journey, we will inspire the morale of all walks of life in the region, promote the high-quality development of the regional economy, and make greater contributions to the comprehensive construction of a socialist modern country and the comprehensive promotion of the great rejuvenation of the Chinese nation.

Shen Shanzhou, deputy secretary of the District Party Committee and district head, made a speech, reviewing the economic and social development of Huangpu since 2021, the main work and Achievement. Since the beginning of this year, Huangpu has focused on the headquarters of central enterprises, licensed finance, digital technology, green and low-carbon and other fields, and has continued to increase investment attraction. In the first three quarters, Huangpu achieved a regional GDP of 212.533 billion yuan, a comparable increase of 0.6%, ranking second in the city in both total volume and growth rate. From January to October, the cumulative introduction of domestic capital exceeded 50 billion yuan, 2.5 times the annual target; the actual foreign investment was 1.087 billion US dollars, a year-on-year increase of 26.1%. China Shipbuilding Corporation, Syngenta, Rongtong Property & Casualty Insurance, Shangyin Wealth Management, Xiaohongshu, AISWEI and many other leading enterprises have taken root in Huangpu. Shen Shanzhou emphasized that he hopes that entrepreneurs will continue to support Huangpu, strive to build Huangpu’s core competitive industries in the next century, and promote the construction of a core leading area of ​​a socialist modern international metropolis.

Gao Yun, secretary of the District Party Committee, delivered a speech, highly praising the important role played by key enterprises at the critical moment of jointly fighting the epidemic and resuming work and production. Gao Yun emphasized that it is necessary to work hard, unite and work hard, and use the spirit of the 20th National Congress of the Party as a guide to start a new journey for the development of Huangpu in the new era. Huangpu will closely follow Shanghai’s overall positioning of “heart, window, and business card” and the main development line of “new peak of function, new benchmark of quality”, and effectively unify thoughts and actions with the grand goal set by the 20th National Congress of the Communist Party of China, and promote high-quality development Show new deeds. We must work together to share the future, and join hands to write a brilliant chapter belonging to Huangpu’s government and enterprises on the new journey. Huangpu will focus on the goal of creating the best comprehensive business environment in the city, and will continue to do its best to be the “Gold Medal Store Second” of service companies, paving the way for the development of enterprises in Huangpu with a more superior environment, more solid measures, and more complete supporting facilities Ladder, escort.