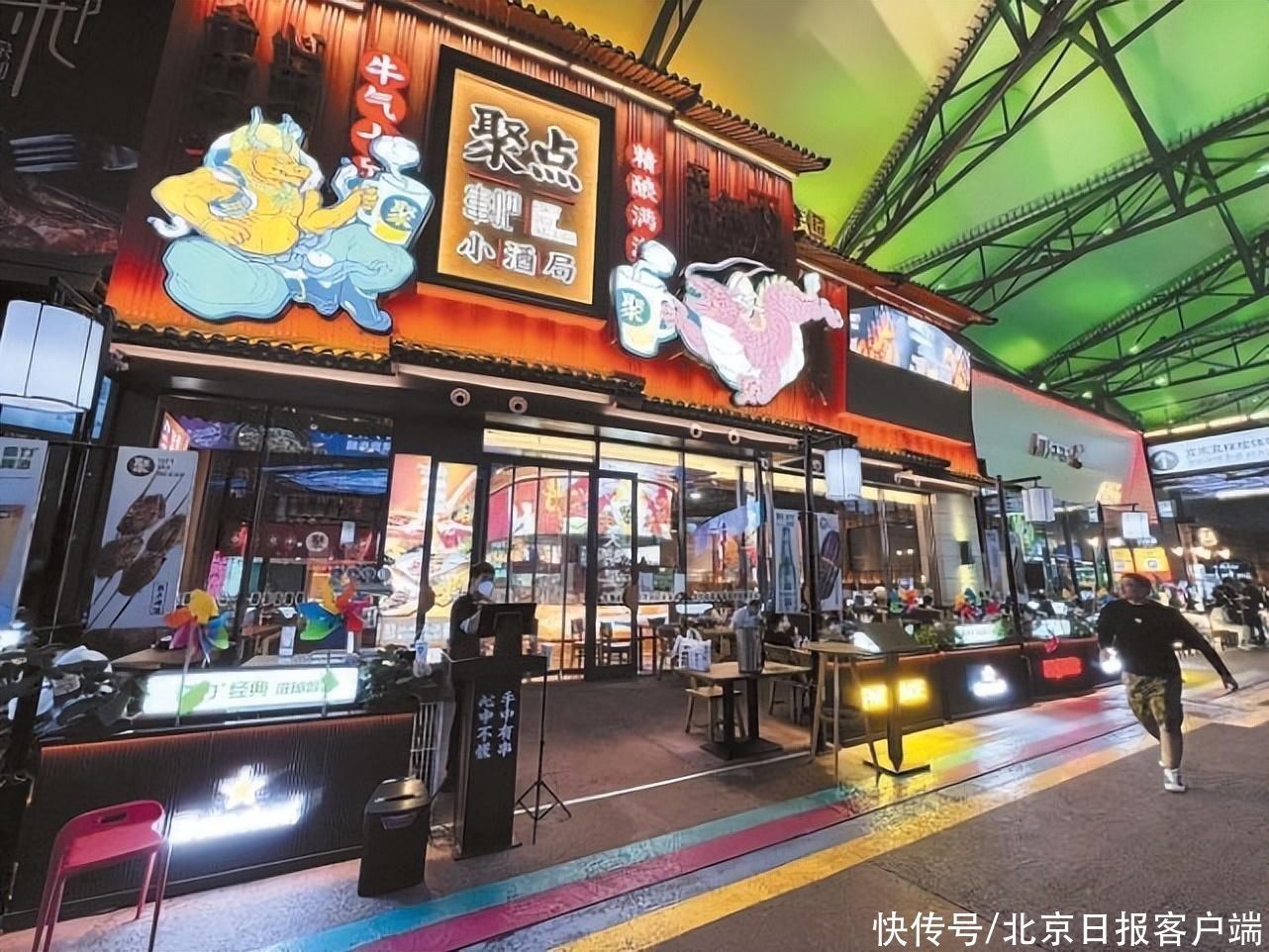 At the beginning of the lanterns, Beijing is full of brilliance under the night. Since the beginning of summer, Beijing’s night economy has recovered strongly, driving the passenger flow and turnover of many business districts to increase significantly. “Night City” has gradually become another dazzling city card in Beijing.

From July, every weekend night, the front square of Chaoyang Joy City has turned into a trendy gathering place. Young people are shopping in the dark while choosing cultural and creative products. In August, the night market has turned into an “island” again. Beaches, swimming pools, and palm trees have been moved to the scene. Outdoor activities such as sunset parties, paddleboard experiences, land surfing, and flea markets have been staged one after another.

The late-night food street is a popular gathering place for Huaxi LIVE·Wukesong. At 11:30 in the evening, nearly 10 restaurants were still open, and the indoor and outdoor occupancy rate exceeded 50%. “We are open at night until 1:30 a.m.,” the manager of the Wukesong store told reporters that since the resumption of dine-in in June, nighttime consumption has continued to heat up, and the store’s revenue has recently surpassed the same period last year.

Since the resumption of dine-in, restaurants in Beijing have also used open-air venues to build beer gardens. As night falls, the beer garden in the courtyard of Xiyuan Hotel lights up with lights, and the Old Town South Beer Garden outside Xuanwumen Business Hotel also ushered in the most lively moment of the day. Grilled skewers, seafood, peanuts, and snacks with all colors and flavors make the nightlife good. lively.

On the night of the Chinese Valentine’s Day, a concert was staged on time at Scitech Ole Square. From that day onwards, the closing time of Sette Ole was extended to 10 pm. “Our exploration of the night economy mainly started this year, not only to activate consumption, but also to reduce the operating pressure brought about by the epidemic in the first half of the year.” The relevant person in charge of Scitech Ole introduced that the concert was carried out simultaneously, and A life market that gathers all kinds of food and daily necessities.

The night economy is no longer just about eating and drinking. With the integration of catering and shopping with cultural entertainment, tourism and leisure, sports and fitness, etc., Beijing’s nighttime consumption supply has become more and more abundant.

This summer, the Liangma River International Style Waterfront has become one of the most popular “net celebrity” night tour routes. The dreamlike interactive light and shadow attract tourists to check in. “The transformed Liangma River is so charming. Sitting on a boat with the evening wind blowing, you can also see various restaurants along the river.” Xiaorong, who traveled the Liangma River at night with friends, left a beautiful memory here. memory.

The Olympic Park under the night is even more unique. On the moonlight pier on the north side of the bird’s nest, the neon lights are flashing, and on the small island in the middle of the lake, people enjoy the food leisurely with the evening wind blowing. After dinner, I walked along with the singing, and the nearby square was even more lively. Couples playing badminton, children playing skateboards, aunts dancing square dances, street singers who play and sing emotionally… all men, women and children have found their own way of entertainment.

With the return of fireworks, Beijing’s night economy recovered strongly. Meituan data shows that since the resumption of dine-in in June, Beijing’s overall nighttime catering consumption orders accounted for 33.7% of the whole day, and the nighttime orders for dine-in restaurants increased by as much as 357%. In addition, the order volume of nighttime entertainment and entertainment in July increased by 55% month-on-month, and the growth rate reached more than 5 times the national average.

The release of energy at night has also become an important engine driving consumption growth. The relevant person in charge of Chaoyang Joy City said that since July, the weekend passenger flow of shopping malls has increased by 25% compared with June, which is largely due to the pulling effect of nighttime activities.

In the opinion of Lai Yang, chief expert of the Beijing International Business Center Research Base, this round of night-time economic recovery is obvious, and it shows distinctive features that are different from previous years—a variety of cultural and entertainment consumption has become the engine, and related Instead, the catering retail of Lianhe has become a supporting facility. “Night consumption is no longer just a simple meal. Consumption with cultural characteristics drives rapid economic growth.” Lai Yang said that this will also become the main theme of future consumption recovery in business districts.