Another large-scale tertiary hospital was notified by the Medical Insurance Bureau of huge violations , involving the refund of the illegal amount and the imposition of several times the fine amount up to 59 million.

Click on the blue word above to follow “Seeing the Medical World”, there is information every day!

The medical insurance violation of the top three hospitals was fined 59 million!

Another large tertiary hospital was notified by the Medical Insurance Bureau for a huge amount of violations, involving refunds of violations and multiple fines of up to 59 million .

The notification information shows that the Wuhan Municipal Medical Insurance Bureau made the following administrative actions in accordance with the “Social Insurance Law” and “Regulations on the Supervision and Administration of the Use of Medical Security Funds”: 1. 2. The hospital self-examined and voluntarily returned the illegal medical insurance fund amount of about 19.16 million yuan and was fined 38.31 million yuan twice; the amount of fraudulently obtained during the inspection was about 4.19 million yuan and was fined 20.93 million yuan five times, with a total of about 59.25 million yuan 3. Order the hospital to suspend medical services involving the use of the medical security fund in the Orthopedics Department for 8 months; 4. Transfer clues to the case to the relevant departments in accordance with laws and regulations. 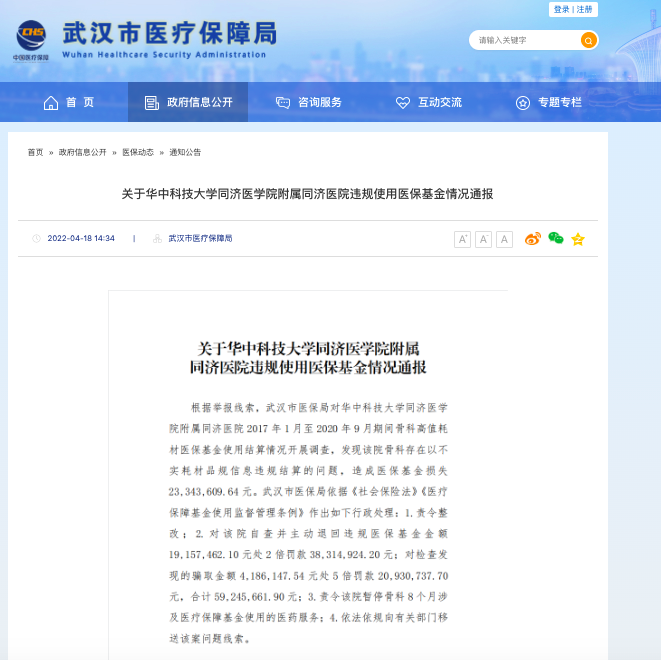 span>According to upstream news reports, about two months ago, after receiving reports from industry insiders, a high-standard investigation team composed of many people from multiple departments came to Tongji Hospital to conduct a comprehensive investigation, focusing on the medical insurance settlement of orthopedic consumables implanted in the body price. After investigation, “the hospital charged shoddy. For example, the steel plate implanted in the body cost 200 yuan, but the hospital wrote it as 600 yuan. In this way, the patient bears more and the loss of medical insurance funds is more.” During the investigation, the The relevant person in charge of the orthopaedic department of the hospital has been taken away by the judicial organs.

Public information shows that Wuhan Tongji Hospital currently has the main campus, the Optics Valley campus, the Sino-French New City campus, the hospital’s annual gate, and emergency department. The number of patients served has been in the forefront of Hubei Province for more than 20 consecutive years, and the top ten in China. The number of hospitalizations and operations also ranks in the forefront of Hubei Province. In the national hospital bed list and outpatient volume list previously released by “Medical World”, Tongji Hospital ranked sixth in the country with 6,000 beds.

Similar cases have been reported before

Wuhan Tongji Hospital’s huge medical insurance violation occurred in the orthopaedic department, and many people in the industry may still have the impression that not long ago, there was also a third-class hospital’s orthopaedic department that was also recovered and punished for more than 8 million yuan due to medical insurance violations. The report from insiders also involves the replacement of consumables, which is the Sixth People’s Hospital of Zhengzhou City.

In September 2021, the Henan Provincial Medical Insurance Bureau’s exposure platform released the first phase of exposure typical cases in 2021. Zhengzhou Sixth People’s Hospital The case of “sleeve label” using consumables to settle medical insurance funds in violation of regulations is among them.

It is reported that the Zhengzhou Municipal Medical Insurance Bureau launched an investigation based on the reported clues and found that the Department of Orthopedics and Bone Tuberculosis of the Sixth People’s Hospital of Zhengzhou City was in the period of 2020.4-2021.4. Performed traditional open orthopedic surgery for 62 patients, implanted 459 ordinary pedicle screws, but recruited, registered, labeled and charged for minimally invasive pedicle screws (long-tail type), suspected of falsifying certification materials The method defrauded the medical insurance fund expenditure, and the illegal amount was as high as 1.74 million yuan.

The local medical insurance department imposed a five-fold administrative fine on Zhengzhou No. 6 People’s Hospital, that is, in addition to recovering the illegal 1.74 million yuan In addition, Zhengzhou No. 6 Hospital was also imposed an administrative fine of 8.7 million yuan, and suspended the hospital’s orthopedics and bone tuberculosis departments for 6 months for medical services involving the use of medical security funds.

It is understood that after the establishment of the National Medical Insurance Bureau, it has made many shots against the top three hospitals, including some A number of tertiary hospitals have violated the medical insurance amount of more than 10 million yuan.

In June 2019, the National Medical Insurance Bureau found during an unannounced inspection that the Second Xiangya Hospital of Central South University had falsely recorded multiple surgical sutures, etc. Consumables costs, excessive medical treatment and other serious violations of the use of medical insurance funds. The result of the handling at that time was to recover all the illegal medical insurance funds and fined a total of 33.5926 million yuan, and correspondingly dealt with 4 hospital-level leaders and 15 middle-level cadres in the violating departments.

After investigating and punishing the illegal amount of medical insurance at a high price, a number of large tertiary hospitals with illegal amounts exceeding 10 million have been notified. Only in 2021 In the first half of the year, there were three.

On April 23, 2021, the exposure platform of the Hainan Provincial Medical Security Bureau released the second phase of exposure typical cases in 2021. The hospital has serious violations such as falsely overstating the cost of medical consumables, excessive inspection, and repeated charging of medical service project fees. The illegal use of medical insurance funds is as high as 54 million yuan.

In December 2021, the Haikou Municipal Medical Insurance Bureau disclosed that the Hainan Provincial Medical Insurance Bureau provided medical institutions in the province from January 2018 to May 2020. During the “unannounced inspection” of the use of medical insurance funds during the month, it was found that 9 medical institutions had medical insurance violations, and the amount of violations by Haikou People’s Hospital was staggering, as high as more than 14 million yuan.

At a policy briefing in July 2021, Duan Zhengming, deputy director of the Fund Supervision Department of the National Medical Security Administration, revealed that in the country Among the unannounced inspections of medical institutions conducted directly by the Medical Insurance Bureau, one hospital returned more than 90 million yuan of illegal medical insurance funds.

It can be seen that the sword of the Super Medical Insurance Bureau, no matter the size of the hospital, is of course not divided between public and private. What is certain is that a penalty of tens of millions or even nearly 100 million yuan is a real “meat pain” for any large hospital, not to mention that under the impact of the epidemic, large public hospitals are currently tightening their belts.

As the main force of medical reform, the actual interests of hospitals and doctors are facing major adjustments. Xu Yucai, columnist of “Seeing a Doctor” and former deputy director of the Shanyang County Health and Health Bureau of Shaanxi Province, believes that as a hospital, it is necessary to completely change the current operation thinking and actively adapt to the huge impact and impact of the new payment model on the hospital economy.

“Medicines, consumables and other materials will become medical costs, so in terms of procurement, we should actively reduce costs; at the same time, ensure patient safety. Under the circumstances, we should actively improve the management of the hospital, optimize the talent structure, actively implement refined management, and only select the right ones and not the expensive ones. We must also reform the performance management plan as soon as possible, and establish a performance management method that conforms to the new payment system.”

Xu Yucai suggested that as a doctor, we must also actively adapt to this change, actively and quickly reverse the incorrect diagnosis and treatment habits, and truly achieve rational drug use and reasonable Inspection, reasonable treatment, “You must really understand that what you save is what you earn. Quickly change the ‘bad’ habits that have long been cultivated that are not suitable for the new payment system, including diagnosis, treatment, medication and consumables use, etc.” (This article is published by “Seeing the Medical World”, reprinting must be authorized, and the author and source should be indicated at the beginning of the article. )

From “big construction” to “fine operation”, how to establish a modern hospital management system? How to achieve refined and high-quality medical institutions through benign operation Quality, leap-forward development? How to build a market-recognized brand specialty?….June 2022, supported by the 2022 Shanghai Medical Fair Expert Committee and the Shanghai Jiaotong University Social Medical Institution Research Institute, to see a doctor The 2022 National Hospital Operation Conference hosted by World Media will be held in Shanghai. Welcome to register and participate in the exhibition!

(You are welcome to leave a message to interact in the comment area, and forward it to your circle of friends)

< p>If you like it, you will be rewarded to see a doctor”