This article is from: China Daily

August 4th, the seventh day of the seventh lunar month. At 7:30 in the morning, in the flight preparation room of China Southern Airlines North Branch, the flight attendant Hu Pan and the flight attendant Fan Xinyu were preparing for the flight. They were about to take flight CZ6407 (Shenyang-Changsha). At this time, their lovers were also in the flight preparation room and were about to perform their respective flight missions. For “shuangfei” couples, gathering less and leaving more is the normal way of life. It is very romantic to be able to set off to the airport together, prepare for the flight at the same time, and wave goodbye in front of the preparation room. Especially during the Qixi Festival, two “double-flying” couples can “fly side by side”, which is even more rare.

“Shuangfei” husband and wife, in civil aviation, mainly refers to the husband and wife are both flight attendants. The flight attendants are mainly responsible for the safety and transportation of passengers. People go with the plane, life is difficult to be regular. Many “double-flying” couples met on the flight, but after they entered the state of love and marriage, it was difficult for them to fly together again. The flight period and rest period of each other were different, and getting together less and separated more became their normal life. 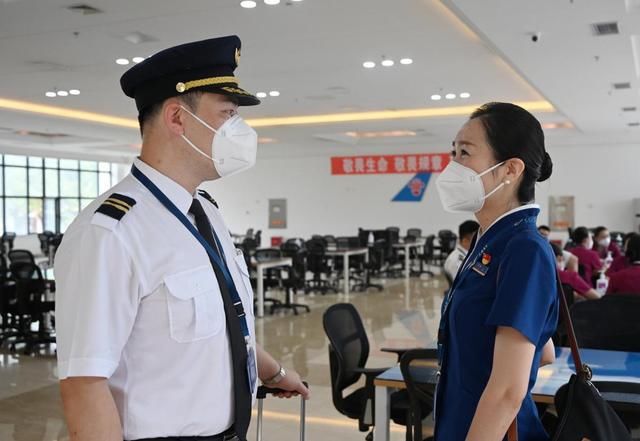 Hu Pan: Thank you for your lover’s support

The lover of the crew chief Hu Pan, Hu Zhichao, is a safety officer, August 4th He flew CZ8637 (Shenyang-Hefei-Jieyang) flight. The night before, when he checked the task schedule, he found that the departure time of the two was only 20 minutes apart. They were able to leave for the airport together. They were excited for a long time. Sitting in the crew car together in the morning, the short drive was less than half an hour, but the two happily chatted about a lot of topics.

Five years ago, the two met on the Shenyang-Tokyo flight. Hu Zhichao was a part-time flight attendant at the time. The two worked together and cooperated tacitly. Hu Zhichao still waited more than a year before he mustered up the courage to find someone to match. Hu Pan, who didn’t want to find a colleague as his other half, was finally moved by Hu Zhichao’s sincerity. They now have a two-year-old baby.

Hu Pan is very grateful to Hu Zhichao for her support and help in her work over the years. Whether Hu Pan is carrying out the flight to transport the Liaoning medical team to Wuhan, or the modification of the wide-body aircraft, or the long-term isolation of the international flight, Hu Zhichao will give full support. What moved Hu Pan in particular was that in 2021, she was promoted to flight attendant, and for the first time she led a group to carry out the Shenyang-Yichun flight independently. In order to relieve the tension of his lover, Hu Zhichao applied for the same flight. Accompanied by Hu Zhichao, the first flight of Hupan’s flight attendant was a complete success.

How will the two celebrate the Qixi Festival after the flight ends? Regarding such a question, Hu Pan said that she would not care about the form of the festival, as long as the two were together, any day could be the Qixi Festival. Hupan’s flight ended early, and she was going to order a boiled fish for her lover, because she remembered that he said he wanted to eat it a few days ago, but it would be after 22 o’clock when Hu Zhichao came back. 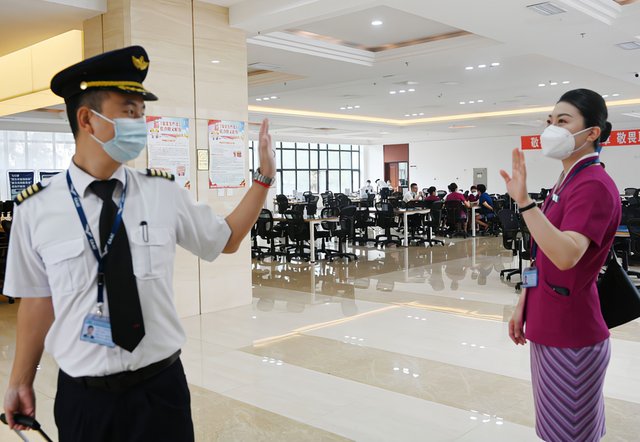 Fan Xinyu: Witnessing the growth of a lover

The flight attendant Fan Xinyu’s lover Bai Yu is a young captain. Perform Shenyang – Shanghai Pudong flight. In the morning, Bai Yu drove his car to the preparation room with his lover. Like the Hupan couple, they were very happy because there were too many days apart.

Fan Xinyu used to work in the cabin department of the Guangzhou headquarters. When Bai Yu was seconded to Guangzhou to help fly, the two met on the Guangzhou-Rome flight. Later, they flew together to Melbourne, Sydney, and Singapore. It took several days for the flight crew to go back and forth, and there was enough time to get to know each other. They quickly established a romantic relationship and got married the following year.

Fan Xinyu said that Bai Yu understands and supports her when she is often away from home, so that she has no worries. Bai Yu is also a serious and responsible person who takes her work seriously. The first thing that attracted her was that when Bai Yu was not working, he would still discuss flight technical issues with his colleagues. In Fan Xinyu’s view, he was a man who was serious and responsible for flight work and was very concerned about safety. A man full of awe.

At the end of 2021, when Bai Yu was promoted to captain, the company held an appointment ceremony, and the family members of other newly promoted captains were on the scene to witness together, but Fan Xinyu did not forget to send a video to her lover during quarantine. went to congratulate. Later, in a rare opportunity, the two of them were arranged to fly on the same flight by coincidence. Fan Xinyu realized the difference between Bai Yu’s operation of the plane after becoming the captain and the previous one. What made her happy was that during the take-off and landing, she felt To the progress and growth of Bai Yu.

During the Qixi Festival, Fan Xinyu looked forward to going out for a walk together at night after their flight back, and enjoying the two-person world while they had no children.

In the active air crew of China Southern Airlines North Branch, there are more than 80 such “double-flying” couples up to now, because they are both husband and wife, and colleagues, in ensuring safety, flights, and operations. In their special work, they understand each other’s hard work and responsibilities. They understand and support each other. Although getting together less and leaving more brings a lot of practical difficulties to these “double-flying” families, in the beautiful love, the career they love. In front of them, they are still full of confidence and passion, hand in hand and flying together.