Not sleeping well is a common problem of contemporary people. In daily life, many people will have the following problems:

Difficulty falling asleep: It takes a lot of time to fall asleep

Wake up early: Wake up very early (such as two or three in the morning, four or five in the morning) and have trouble falling back asleep after waking up

Today, #prolonged early awakening may be a sign of depression# has been a hot topic on Weibo. 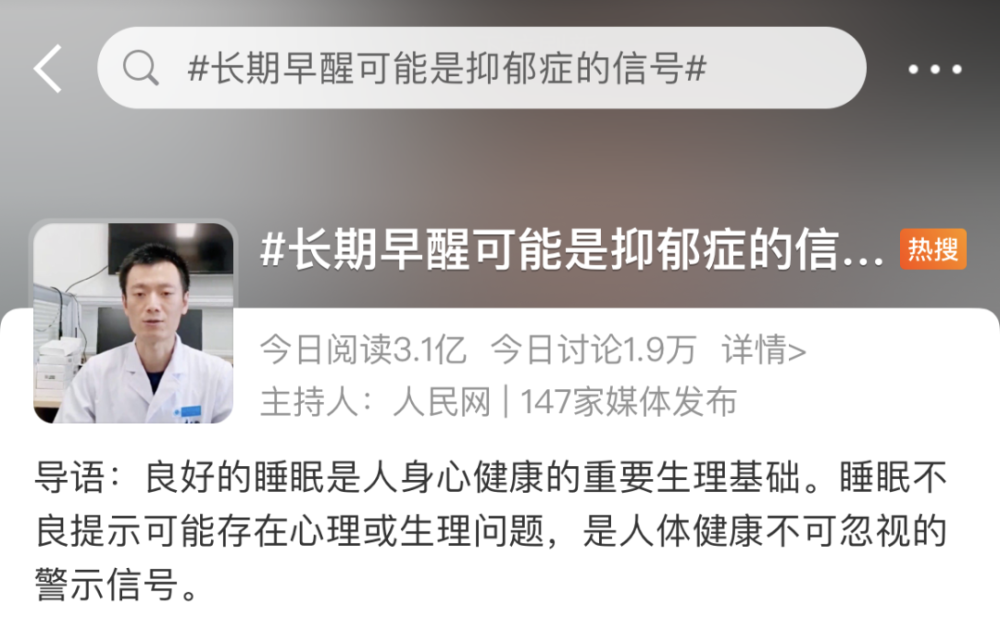 Is “Waking Up Early” Depression? Let’s see what psychologist Ding Ruoshui has to say~

Waking up early is indeed a sign of depression

Before judging the relationship between “early waking” and depression, the first points to be determined are:

Do you belong to the “early wake” group

If you regularly wake up at least 2 hours earlier than usual, you can consider yourself “early waking up.”

Most people with depression will have at least 5-6 of the symptoms described below, and the symptoms will last for at least two weeks and be significantly more severe than they were two weeks ago.

Feeling sadness, sadness, emptiness, and hopelessness, most of the day, almost every day;

Almost every day, most of the time, lose the joy of life with everything, and have difficulty enjoying life;

Indecision and difficulty in making decisions;

A task or job that was previously achievable is now strenuous;

Changes in appetite and weight (mostly decreased, but some patients gained weight);

Takes 1-2 hours to fall asleep, but wakes up earlier than normal or sleeps too much;

Sudden loss of interest in sex;

Then, what happened to those who “wake up early”?

There are many reasons to wake up early

In addition to depressive episodes leading to early awakenings, the following reasons are also common:

Light: In summer, if the curtains are generally shaded, we naturally wake up earlier;

Temperature: If you don’t have the habit of turning on the air conditioner, it is a natural phenomenon to wake up in the middle of the night this summer;

Voice: Don’t you think the neighbors wake up earlier in the summer than in other seasons?

Age: When you get older, you will experience less activity during the day, less physical strength, and earlier sleepiness, easier sleep in the middle, and insufficiency of brain dormancy, all of which make waking up early more difficult. easy to happen. Young people, cherish every sleepless morning 🙂

Short-Term Anxiety: Being under a lot of stress and stuffed with to-do items can really affect sleep, such as an important exam, meeting the next morning , such as waking up suddenly from sleep;

So, if you have trouble waking up early, worry that you are suffering from depression, and this worry will further aggravate your anxiety, don’t worry about it, go to the doctor first, no matter what Yes or no, there is always a definite response.

If you don’t worry about whether you are depressed or not, but you just wake up early, the following tips may help~

If you often wake up early

Maybe some small changes could be made

If you wake up early for a long time, accompanied by drowsiness and lack of energy during the day, this may constitute a problem. You can consider going to the “Sleep Specialist” of the hospital to ask the doctor to make a clear diagnosis and give a feasible diagnosis. Suggest.

If you’re hesitant to go to the hospital, try these tips first:

Dark enough: Changes in brightness can trigger hormone changes in our bodies, triggering arousal, and blackout curtains and eye masks can help block outside light to a certain extent. Reaching out and out of sight is the most beneficial brightness for sleep

Adjust “humidity”: A room relative humidity of 50% to 60% is suitable, if your nose feels dry, consider using a humidifier, or at least in the room Put a basin of water

Pay attention to your bedtime schedule: One hour before bedtime, you can enter a state of preparation, stop eating and drinking, stop activities that make the brain very active, you can take a shower, soak feet, listen to some soothing music, arrange something to relax

Control your lunch break time: If you are sleepy during the day, try to take a nap of at most 15 minutes, don’t snooze, it will affect your sleep at night

Schedule daily activities to reduce stress: such as exercising at least two or three times a week, talking face-to-face with friends, and carefully observing a plant in your environment , enjoy some long, long hugs

If just waking up early doesn’t affect your daily performance during the day, congratulations! Make the most of the extra time in the morning.