The epidemic in Sanya is currently on the rise

As a well-known tourist city in China, Sanya City, Hainan Province has been fermenting this round of local epidemic for 6 days. A total of 558 cases of infected people have been found, and they have experienced multiple variables.

From the very beginning, the single-digit number was added in a single day, most of them were detected from the quarantine point, and the hundreds of new cases were added in a single day. The emergency global static management was announced, resulting in nearly 80,000 foreign tourists being stranded. Later, it was discovered that the Omicron variant BA.5.1.3, which caused the current round of epidemic in Sanya, was detected for the first time in China, and it had been hidden and spread in the fishing port for a period of time.

“The current chain of transmission is radiating from the central fishing port in Yazhou, and the epidemic is on the rise.” Ji Duanrong, member of the Sanya Municipal Government Party Group and Secretary-General, said on August 4 during the prevention and control of the new crown pneumonia epidemic. said at a press conference.

It is reported that on the afternoon of August 5, Hainan Province and the Sanya Working Group of the Joint Prevention and Control Mechanism Comprehensive Group of the State Council held a work matchmaking meeting in Sanya to study and discuss Sanya’s epidemic disposal and prevention and control work. 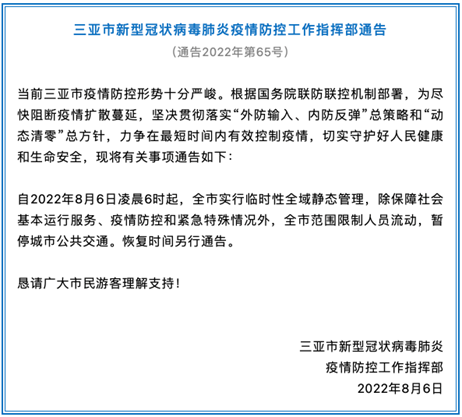 After 3 days, confirmed cases surge by 100

On August 1, the official release platform “Sanya Release” of the Propaganda Department of Sanya Municipal Party Committee stated that a person with abnormal nucleic acid test results was found at the sampling point of Yazhou train station, and was diagnosed as a confirmed case of new coronary pneumonia. (lightweight). This is the beginning of the current round of the Sanya epidemic.

At 0-23:30 on August 2, there were 10 new confirmed cases of new coronary pneumonia (mild) and 1 asymptomatic infection in the city, who were close contacts and community members of case 1 Screeners.

At the same time, Sanya has shrunk its epidemic control measures: closed business venues such as singing and dancing entertainment venues (KTV) and movie theaters in the city are temporarily closed. Sanya People’s Hospital, Sanya Central Hospital (Hainan Province) The Third People’s Hospital) and other seven hospitals announced that they will fully implement the appointment registration and real-name system for medical treatment.

At that time, the public attitude was still optimistic. Many people left a message under the “Sanya Release” saying that the government responded quickly and brought the epidemic under control in time.

At 13:57 on August 3, the “Sanya Release” notification stated that there were only 2 newly confirmed cases at 23:30-24 on August 2, and they were in centralized isolation. and key personnel screening. It seems that the epidemic has been effectively controlled.

But then there was a sudden tension. At 22:34 on the 3rd, Sanya announced that starting from 0:00 on August 4th, except for the Haitang Bay area, the Yalong Bay area, and the Yucai Ecological Zone, the city will enter a state of regional control, except for public service enterprises that ensure the lives of citizens and the basic operation of the city. In addition, other units have implemented rotating vacations or working from home, and various business places have been suspended; residents are not necessary to stop entering and leaving, and can go out to buy supplies once every two days with the pass.

On the 4th, the situation took a turn for the worse. From 0-12 on the same day, 48 new confirmed cases were added, 1 asymptomatic infection was turned into a confirmed case, and many people were found in community screening. 19 new medium-risk areas and 30 high-risk areas were added.

As of 13:12 on August 6, a total of 455 confirmed cases and 103 asymptomatic infections have been found in this round of epidemic in Sanya.

It is the first strain detected in China,

Possibility of infection when trading with foreign fishermen

At the press conference on the prevention and control of the new crown pneumonia epidemic held at 15:30 on August 4, according to Ji Duanrong, from the current case, the infected people are mostly related to fishing ports, fishing boats, and fishermen. related to the fishing market, the transmission chain is radiating from the central fishing port in Yazhou, the epidemic is on the rise, and there is a risk of community transmission in urban areas.

“Up to now, the infected people reported in this round of epidemic are basically related to the central fishing port of Yazhou, and the transmission chain is basically clear, which also indirectly shows that the central fishing port is the origin of the epidemic. Imported place.” Jin Yuming, chief expert of the Hainan Provincial Center for Disease Control and Prevention, said at a press conference.

After epidemiological investigation and virus gene sequencing analysis, it was the new coronavirus Omicron variant BA.5.1.3 that caused the current round of epidemic in Sanya. It is reported that this is the first time this strain has been detected in my country.

At present, the Omicoron BA.5.1 variant is popular in Vietnam and Taiwan, China around Hainan Province. This variant is the most concerned variant in the world recently. It has been widely used in Europe and the United States. Rapid rise as the main epidemic strain.

The comprehensive analysis of experts believes that the current round of epidemic in Sanya has nothing to do with previous epidemics in Hainan Province, nor with domestic and foreign tourists. It can be roughly judged that it was caused by overseas imports, and it was a fishing port in the center of Yazhou, Sanya City. Fishing boats, when trading fish goods with overseas fishermen, are more likely to be infected by the fishermen or imported by virus contamination.

It is worth noting that BA.5.1.3 is highly contagious, spreads fast and concealed, and subsequently spread concealed in the central fishing port of Yazhou for a period of time. Also based on this, in order to block the spread of the new crown epidemic in a timely and effective manner, the Sanya Center for Disease Control and Prevention has assigned a yellow code to the “Hainan Health Code” of those who have been with the positive infected person in time and space.

Due to the sharp increase in the number of new crown infections since August 4th, from 6:00 am on August 6th, Sanya announced the implementation of temporary global static management. Except for prevention and control and emergency special circumstances, the movement of people is restricted throughout the city, and urban public transportation is suspended.

As soon as this news came out, the topic of “Surge in return flight tickets from Sanya” rushed to the hot search on Weibo. According to The Paper, a direct flight from Sanya to Shanghai today is not only hard to find, but also the full price of economy class tickets and more than 10,000 business class tickets. On the 7th and 8th, the air tickets from Sanya to Shanghai in the following days are also similar.

But at noon today, some media learned from a number of airlines that, after receiving a notification from Sanya, all flights involving Sanya on the 6th were required to be canceled, or no passenger planes would leave Sanya. . At present, flights to Sanya have turned back halfway, and the planned flights already at Sanya Airport are required not to carry passengers away from Sanya, and the flights that have already boarded but have not yet taken off are also required to disembark, and the flights can only fly out empty. Sanya.

The terminal of Sanya Phoenix Airport is currently only available for entry and exit. Passengers stranded at the airport will be transferred to hotels in the city for subsequent arrangements. The “Medical Community” inquiry found that all direct flights from Sanya to Beijing, Shanghai, Hangzhou, Guangzhou and other places on August 6 have been cancelled. The earliest direct flight from Sanya to Beijing currently displayed is to take off at 21:10 on August 8, and the economy class fare is 3,668 yuan, and there are only 3 tickets left. 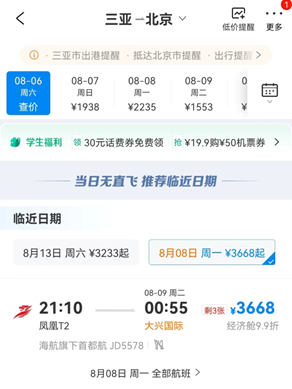 As a tourist city, it is also in the peak period of summer travel. According to He Shigang, Deputy Mayor of Sanya Municipal Government, the current round of epidemic in Sanya has caused more than 80,000 tourists to stay in Sanya, of which about 32,000 People stranded at the hotel.

According to CCTV news reports, the railway department has banned all sales in Sanya, and citizens cannot leave Sanya by railway. At present, Sanya Station, Yalong Bay Station, Phoenix Airport Station, and Yazhou Station are only accessible, and the recovery time will be notified separately.

At a press conference held this afternoon, Sanya officials said that the hotel can provide stranded passengers with half-price renewing services. According to the relevant requirements of the Joint Prevention and Control Mechanism of the State Council, the stranded tourists can leave the island after completing the 7-day risk investigation, that is, on the 1st, 2nd, 3rd, 5th and 7th days of the 7th day, if the nucleic acid test is negative.

To be held in Shanghai

* The medical community strives for the accuracy and reliability of its publications when reviewed, butIt does not make any commitments and guarantees as to the timeliness of the published content and the accuracy and completeness of the cited materials (if any), nor does it assume any inaccuracies or incompleteness of the cited materials due to the outdated contents. any liability arising out of such circumstances. Relevant parties are requested to check separately when adopting or using it as a basis for decision-making.