This article is edited with a word count of 3403words, estimated reading time, 9 minutes.

The material life is rich now, but I often hear someone say:

You must eat 10 tomatoes to get the nutrition of 1950 one tomato.

Carrots today have little to no nutrition compared to carrots from decades ago. 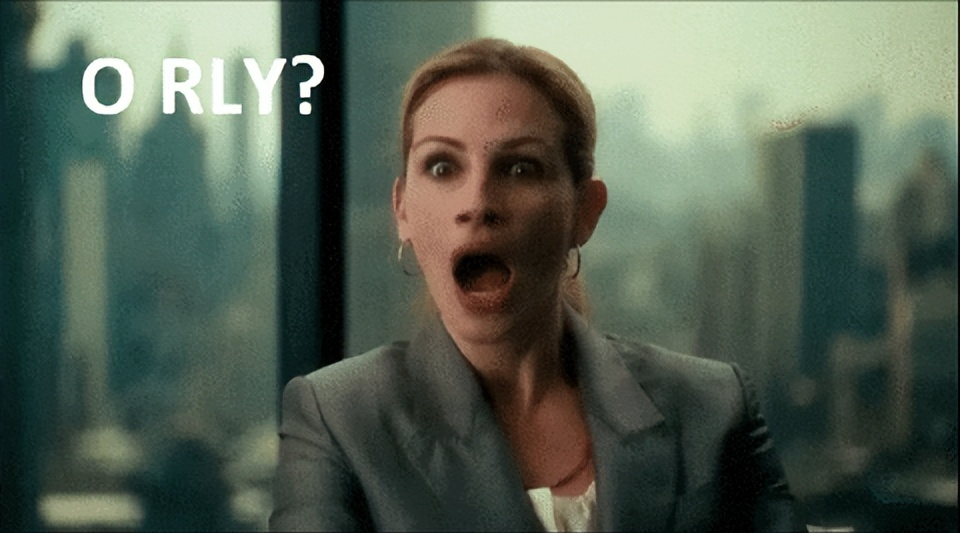 Things like this, at first glance seem to be true, but in fact most of these sources cite these 2 studies.

Study 1: Using relative change, which appears to be a large number, the change is small.

2004 In December 2004, Donald Davis at the University of Texas conducted a landmark study published in the Journal of the American College of Nutrition superior.

They studied nutritional data for 1950 and 1999 USDA 43 different vegetables and fruits and found that over the past half century Protein, calcium, phosphorus, iron, riboflavin (vitamin B2) and vitamin C were all decreased.

There was also a decrease in

Vitamin C levels, which are important for the growth and repair of various tissues in the body, as well as immune function, are also reduced. 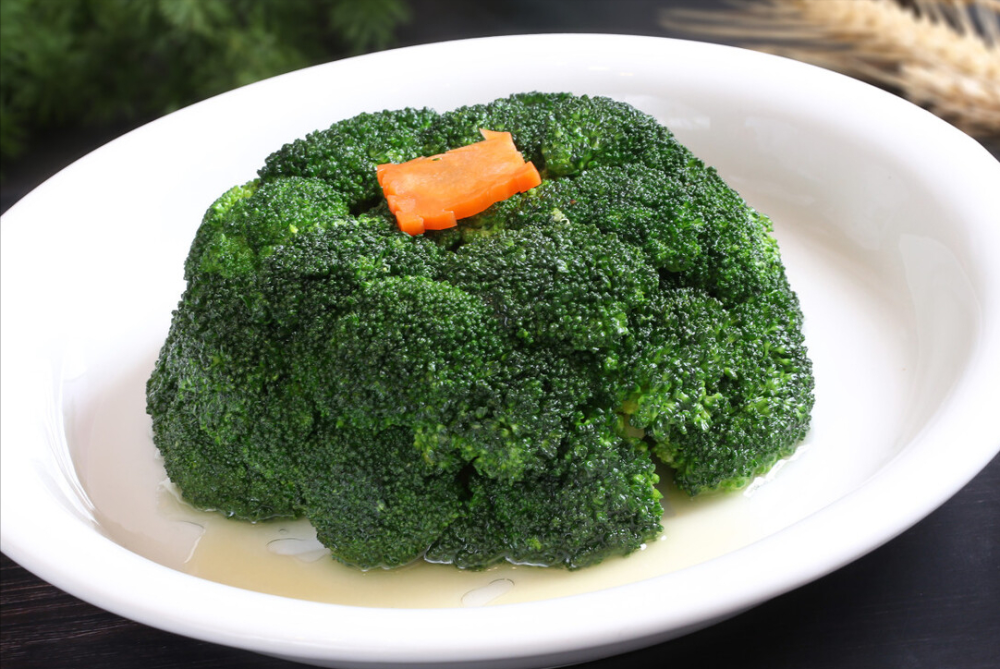 Here comes the point, they think the same goes for other nutrients like magnesium, zinc, vitamins B-6 and E, but these nutrients were not studied in the 1950s, Therefore cannot be included.

Furthermore, the study uses relative changes rather than absolute changes, which often give the impression that such changes may seem large when in fact they are very small in absolute value. 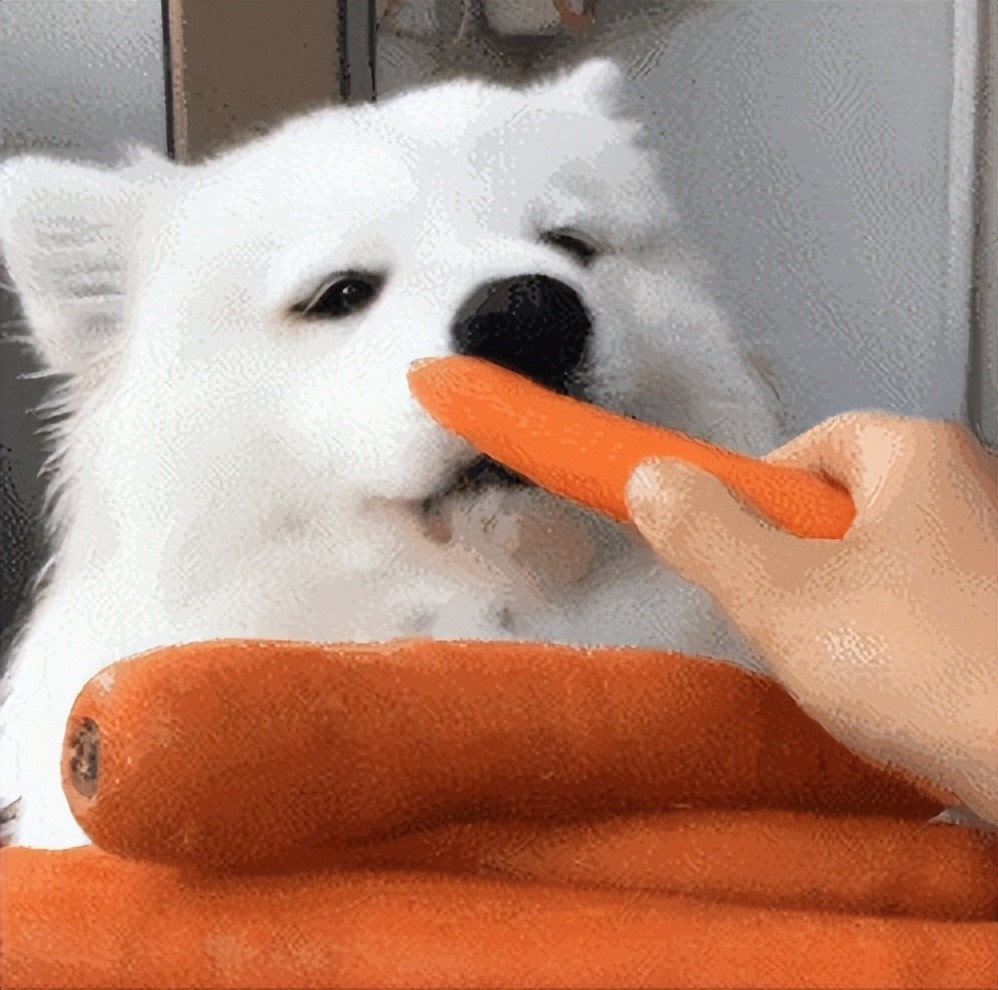 Using the relative change, it turns out that carrots today have 34% less calcium than carrots in the 1950s, all of a sudden a lot higher?

However, as we can see from the raw numbers, in reality, the absolute change is only a few milligrams, which is about negligible.

There is a similar study, published in Food Composition and Analysis, of UK nutrition data from 1940 to 2019.

Study found that 29 vegetables and fruits had decreased concentrations of all elements except phosphorus, with the largest overall decrease in sodium (52%) over the 80-year period , iron (50%), copper (49%) and magnesium (10%). 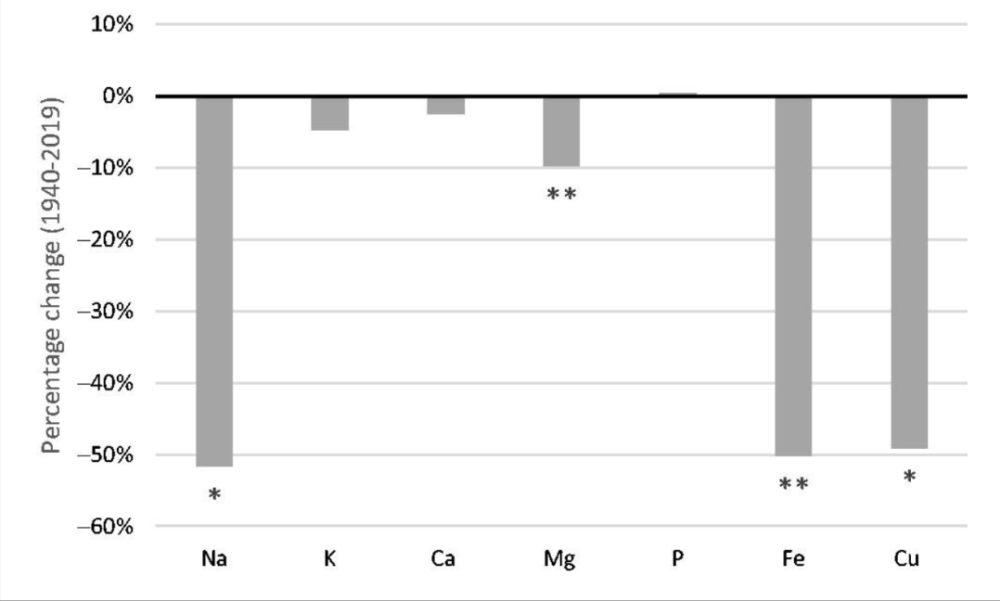 Now you know? This just found an expected change in nutritional data that could be explained by natural variation.

A food is less in nutrient content, it doesn’t matter, we should focus on specifically, not the percentage >.

The Kushi Institute’s “Analysis” is an article by A. Jack, a health writer associated with the organization, titled “Under Siege Nutrition” was published in 1998, and the authors compared nutritional data from 1975 to 1997.

Actually, it’s not a study, it’s not subject to peer review, and it’s less as valuable as the previous article, which The articles were published in scientific journals, and the Kushi Institute, a organization promoting long-lived lifestyles, is no longer in operation.

So, nutrition did drop, but not as horrible as they say? So what is the reason?

Soils are becoming poorer, causing the loss of nutrients from fruits and vegetables.

The overuse of fertilizers reduces the nutrients that the soil originally contained.

In terms of human factors, chemical pesticides and pesticides also cause a large amount of nutrients in vegetables and fruits to be lost. Improper planting methods and premature harvesting are also the nutritional value of vegetables. One of the reasons for the decline.

However, our modern agriculture is great.

In formerly natural soil ecosystems, the “nutrients” in the soil were stabilized by plants, animal manure, etc., and there was very little soil erosion or leaching >, the overall quality of the soil is therefore higher.

However, many people think that in modern agriculture, plants take nutrients from the soil, and as they are harvested and put on the market, less nutrients are returned to the soil and other nutrients are Lost due to soil erosion, environmental pollution, and dissolved by drainage (leaching).

But don’t forget, the way is better than the hard way.

Modern agriculture can be achieved by addingCorn stover, stems, roots, manure, ash, phosphates, chemical fertilizers, etc. to put nutrients back into the soil, crop rotation can also play a role.

Also, modern farming has many benefits: 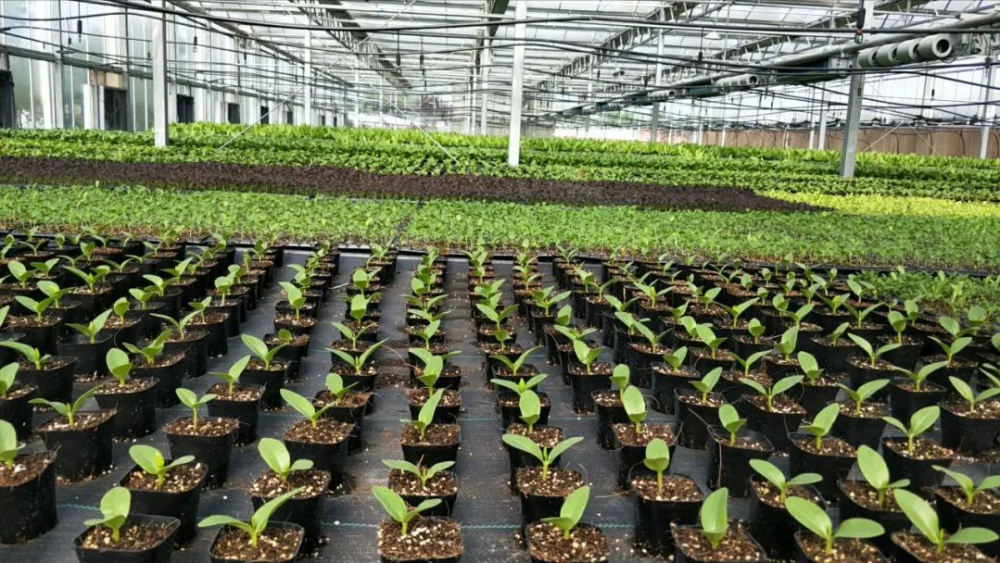 2. You can eat out-of-season vegetables. Vegetables grown in greenhouses are not limited by seasons, and can break the time difference, space difference and geographical area. However, the vegetables grown in the open field are affected by the weather, and are threatened by high temperature and heavy rain in summer, so the yield and quality cannot be guaranteed.

However, some off-season vegetables, driven by benefits, will add some hormones such as growth hormone, which may cause some harm,

The downside is that because of the favorable conditions,the growing season is shorter and less nutrients accumulate.

Therefore, we need to make it clear that although the nutrients of fruits and vegetables will be reduced, the amplitude is very small, and a diversified diet can be adopted.

Now, with modern technology, plant breeders have discovered that by enhancing color, carrots also induce an increase in vitamin A. 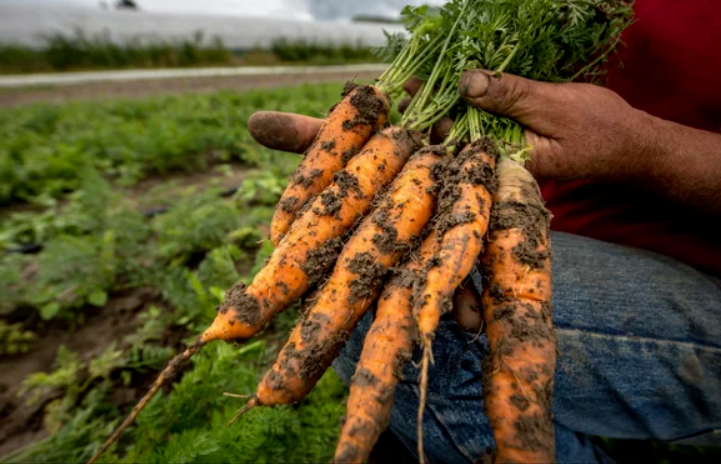 Wheat, corn, rice, soybeans, potatoes, bananas, yams and flax all work with key fungi that enhance plant access to nutrients from the soil and moisture capacity.

Fungus is the extension of plant roots, and high-yield agriculture can make soils barren, which to a certain extent damages plants and mycorrhizal fungi > cooperation.

Rising carbon dioxide in the atmosphere is also reducing the nutritional value of food. 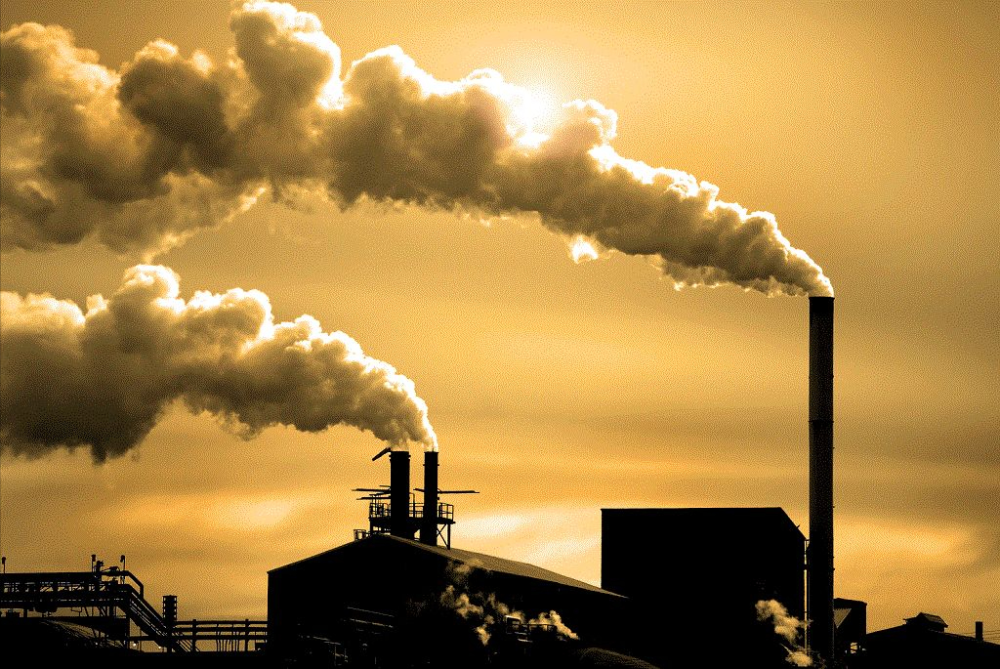 All plants undergo photosynthesis, and when crops such as wheat, rice, barley and potatoes absorb high levels of CO2 from the atmosphere, they produce more Carbon-based compounds, and thus higher in carbohydrates.

So, we live in a society with a calorie excess and a micronutrient deficiency.

These factors contribute to our appetite, our tendency to overeat, and an increase in certain diseases such as diabetes, obesity, cardiovascular disease, and osteoporosis.

Modern food doesn’t taste right. It’s a change in the variety of food. Now the varieties have higher yields and improved pest resistance, but the taste has also changed.

Vegetable nutrition has also “shrinked”, but it is not as serious as said, There are many reasons behind it, such as Environmental pollution, pesticide overuse, and more.

However, we don’t need to worry about malnutrition, we can eat more meat, which is more nutrient dense and bioavailable than vegetables. 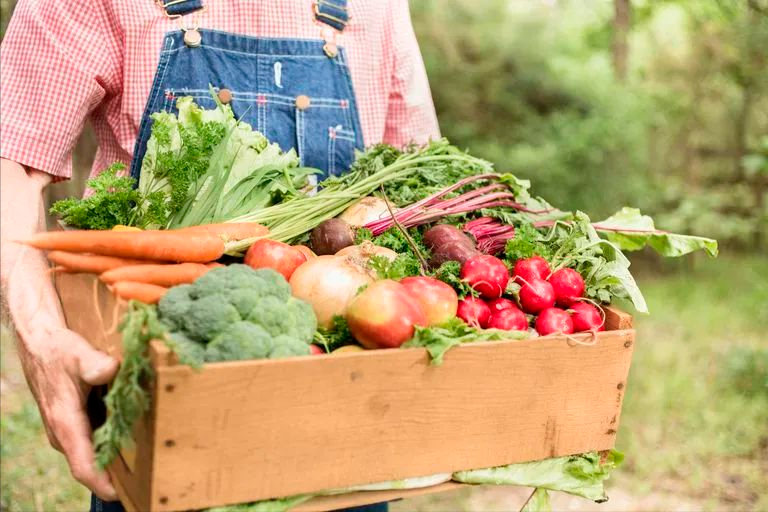 If you have your own land, be sure to maintain the nutrition of the land, and you will find that the vegetables you grow may taste a little better.

If you are concerned about nutrition, you need to be more careful about reducing your intake of antinutrients:

At the same time, be careful not to overdose dietary fiber, especially the elderly with low gastric acid levels, which will chelate with phytic acid and minerals, resulting in nutrient loss.