In 2022, Mindray will join hands with dozens of top critical care, emergency, and respiratory experts from dozens of hospitals, combined with actual cases, from topic selection, design, implementation, In the process of analysis, writing, submission and other links, systematically develop a series of “face-to-face scientific research” series of clinical scientific research courses, and strive to pass practical and powerful interactive content, scientific research ideas and implementation methods, writing specifications and submission skills, to clinical medical staff and help them. Facing the “big mountain” of scientific research, clear mountain-shaped paths, find the best climbing route, and climb the mountains together.

July 28th, “Face-to-face Scientific Research Emergency “The second issue is a big hit, broadcast by multiple media including the Doctor’s Daily Live Center and Medical TV, with over 260,000 views! 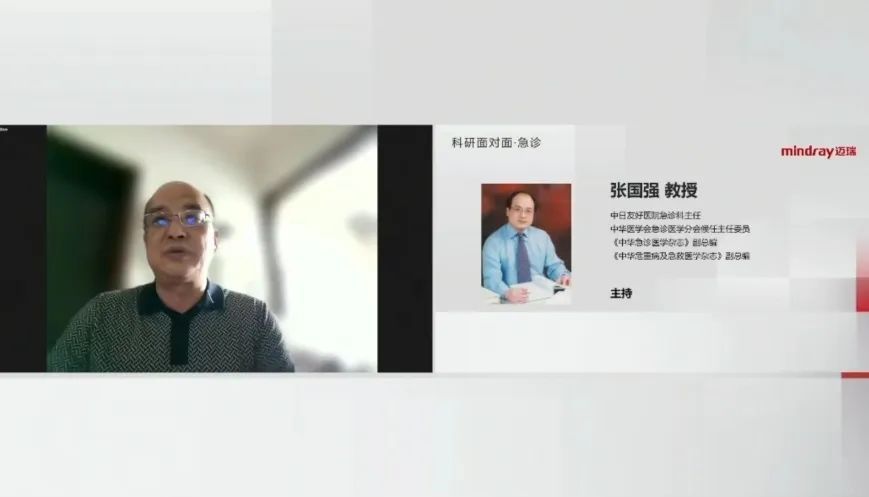 Take the acute stage of the disease as the entry point

< span>Many emergency department doctors often face a common problem, that is, the work and research content of the emergency department often covers all directions of women and children inside and outside. As we all know, the clinical characteristics of the emergency medicine department are fast working pace, no distinction between day and night, the most concentrated critical illnesses, the heaviest rescue management tasks, and the most types of diseases. To conduct scientific research while facing such a huge clinical task, it is indeed worth pondering by emergency physicians. Professor Zhang Dongshan, Deputy Head of the Clinical Group of the Emergency Medicine Branch of the Chinese Medical Association and Director of the Emergency Department of the Second Xiangya Hospital of Central South Universityemphasized that if we want to To condense the research direction with emergency characteristics, we must focus on combining the acute exacerbation period of disease progression and the balance and steady state of various organs of the body, and highlight the outstanding characteristics of the emergency department. 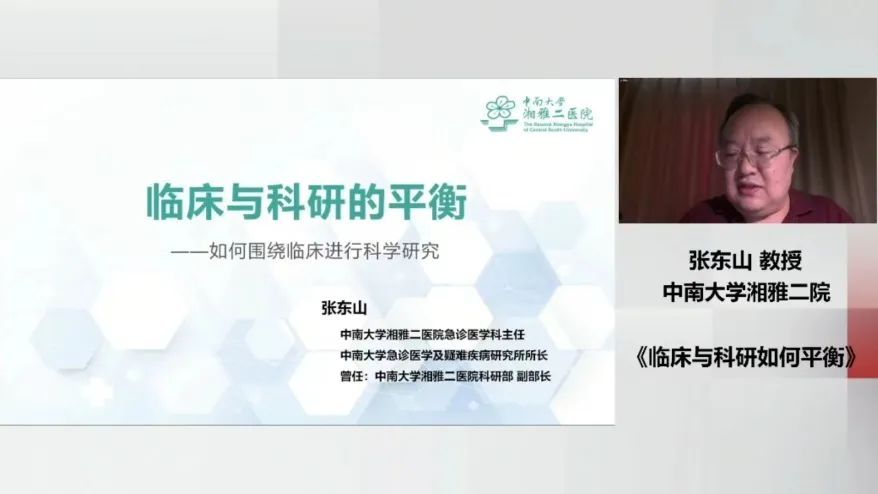 In order to effectively combine scientific research with clinical practice, firstly, a biological sample bank must be established to accumulate sufficient case samples.

The second is to make good use of NHANES, MIMIC, SEER and other public medical databases, so as to mine and find their own research direction and content.

The third is to ensure comprehensive and continuous internal strength and proactive outreach. Professor Zhang Dongshan emphasized that scientific research should not be done alone, and know how to integrate Resources are the right way to develop scientific research. In addition to strengthening the cultivation of young doctors’ scientific research awareness in the department (including scientific research inspiration and guidance, application of various funds, etc.), and improving basic knowledge reserves such as bioinformatics analysis; Cooperation, good use of bio-information analysis technology, avoid entering misunderstandings, and quickly improve the pace of scientific research.

Based on the unique advantages of interdisciplinarity

“If you have never done a wrong job, you can be regarded as a scientist’s seriousness If he is responsible, it can also simply prove that this scientist lacks courage and initiative.” This sentence said by the Soviet physicist Migdal, director of the Beijing Key Laboratory of Cardiopulmonary Resuscitation Prof. Li Chunsheng deeply agrees, and he also believes that initiative is one of the qualities necessary for scientific research.

Looking back at the history of medicine, there is no lack of content that has been admired for a long time and finally identified as false propositions, but this also proves that science often needs After a long test of time and serious thinking, it is precisely because of this that the value of scientific research lies in the process of having the courage to prove it. 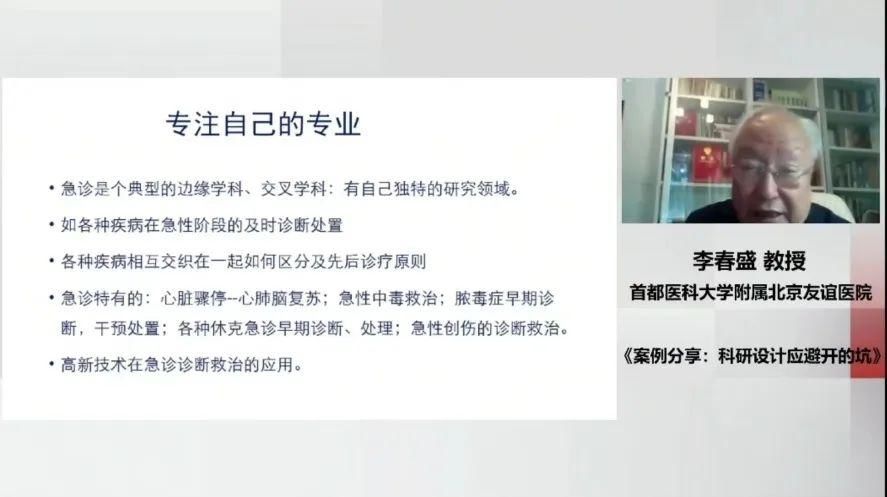 Not all scientific research achieves expectations As a result, it is often a trial-and-error process itself. After research and implementation, it is a question of design, method and technology, or feasibility. But this does not mean that everything can be tried. In response to this problem, he raised several reminders to the juniors of the emergency department: avoid proving pseudo-scientific content; in vitro experiments cannot prove that it is effective in vivo; research institutions and human property and research Mismatches in topics, such as making assumptions that cannot be implemented, etc.; can’t touch other people’s professional content with one’s own amateur. Emergency medicine is a typical interdisciplinary subject, so it also has its own unique research field, such as how to distinguish between various diseases and the formulation of the principles of successive diagnosis and treatment when various diseases are intertwined; the application of high-tech in emergency diagnosis and treatment, etc.

Whether in the experimental design or clinical research, researchers may The problem of shackles the further development of thinkingscattered. For this reason, in the discussion session of this live broadcast, the authoritative experts gave standard answers to those basic but common questions in scientific research.

Q1, how to set and select primary and secondary endpoints

Professor Li Chunsheng:The primary endpoint mainly refers to the main purpose that the RCT research wants to achieve, that is, the researcher should clarify before the study What is the main problem you want to research. Secondary endpoints are the secondary questions that the study examines, trying to ensure that the study has value, even if it doesn’t get the results it ultimately intended.

Q2, what are the clinical studies included

Take a confirmed patient with a specific disease as a case and a comparable individual without the disease as a control, measure A study that compares the exposure risks of various factors in a case group and a control group, and draws conclusions through statistical tests, is called a controlled study.

Cohort study refers to dividing a specific population into different subgroups according to whether they are exposed to a suspicious factor or the degree of exposure, and follow-up observation. An observational study in which the occurrence of an outcome (such as disease) in two or more groups of members, and the difference in the incidence of the outcome between the groups is compared to determine whether or not there is a causal relationship between these factors and the outcome and the extent of the relationship. If we already know the intervening effects of these exposure factors and discuss them, it is a retrospective study; if an exposure factor exists, but its harm and specific effects are unknown, then a cohort needs to be established. prospective study.

Q3. Where does the sample size come from?

Zhang Mao, Vice Chairman of the Emergency Medicine Branch of the Chinese Medical Association Professor: The sample size of scientific research often depends on the indicators required for the primary endpoint of the study, and is calculated based on the expected difference and test power to be achieved. If the new method has obvious advantages compared with the traditional method, it is possible to complete the experiment with a smaller sample size; otherwise, a larger sample size is required, resulting in a decrease in feasibility.

Q4, those thoughts from research to translation

Lv, Deputy Dean of Xiangya School of Medicine, Central South University Prof. Ben:Heparin is an endogenous polysaccharide molecule in mammals, and it is also a commonly used anticoagulant drug in clinical practice. It is precisely because of its anticoagulant effect that heparin has a bleeding risk in clinical use, especially for critically ill patients. The team further isolated the anticoagulant and anti-inflammatory effects of heparin and invented a new method for treating sepsis with heparin without anticoagulant activity. Previously, after initially exploring whether the HMGB1-caspase-11 pathway is a potential drug target for sepsis, the team established a screening platform for a characteristic HMGB1-caspase-11 pathway inhibitor to selectively inhibit the activation of the caspase-11 pathway. The lead molecule of heparin, discovered and explained that heparin can prevent organ damage, DIC occurrence and death in sepsis by inhibiting the activation of Caspase-11.

Q5, how to use bio-informatics to help clinical research

Member and Deputy Secretary of Emergency Medicine Branch of Chinese Medical Association Professor Changma Qingbian: Although the patients in the emergency department are relatively complicated, due to the large number of patients, it is easy to obtain massive patient data and parameters, so it has the characteristics of big data. In addition, the all-encompassing data can be used as a population cohort study. Based on these characteristics, as long as a suitable entry point can be found in the clinic, it is possible to use the majors related to bioinformatics and even artificial intelligence to obtain better scientific research results.