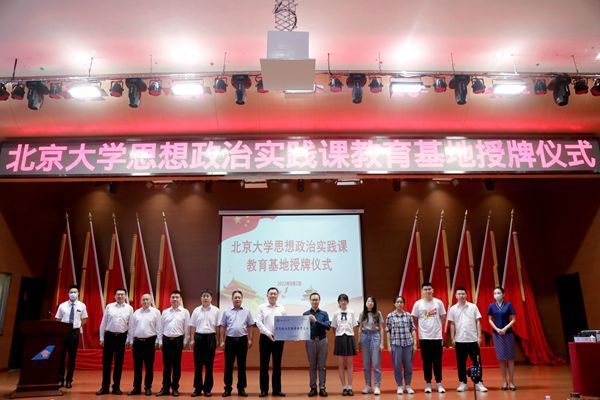 The scene of the awarding ceremony. Photo by Wang Chen

After the unveiling ceremony, Xu Yang, member of the Party Committee and Deputy Dean of the Department of Information Management of Peking University, presented the situation with the theme of “Opportunities and Challenges of Aviation Industry in the Digital Economy Environment” for the cadres and workers of China Southern Airlines Guizhou Company The special lecture on the task introduced the digital, intelligent and informatization development prospects and related economic strategy ideas of my country’s aviation enterprises under the current situation. The wonderful lecture won warm applause.

Talents revive enterprises, and talents strengthen the country. As the largest base airline in Guizhou Province, China Southern Airlines Guizhou Company shoulders the responsibility of disseminating advanced civil aviation cultural concepts and assisting the cultivation and introduction of high-tech talents; Peking University, as the first national comprehensive university in modern China, is the first to spread Marxism and the birthplace of democratic scientific thought. This time, China Southern Airlines Guizhou Company has become the first airline company in China to cooperate with Peking University’s ideological and political education program, marking that the cooperation and exchanges between key universities in my country and large airline companies have expanded to new platforms, given new opportunities, and added new ones. Vitality and opening a new chapter are a high degree of agreement between the two sides for the joint training, mutual support, mutual benefit and win-win of “high-quality, high-quality and short-sufficiency” talents.

“After the education base is put into use, it will officially accept teachers and students from Peking University to carry out relevant ideological and political practice activities such as visits, research and study, policy publicity, etc. on social conditions and enterprise conditions, and strive to create a successful school-enterprise cooperation in Guizhou. A new model. At the same time, we will also give full play to the advantages of sharing resources and achievements, and combine ideological and political classrooms with corporate scenarios, so as to promote more advanced scientific research results and the application of information technology to bear fruit in aviation enterprises.” Xiang Wen, Secretary of the Party Committee of China Southern Airlines Guizhou Company Yong said that in the future, both schools and enterprises will continue to communicate, explore new methods of ideological and political practice education, make positive contributions to deepening cooperation between the two sides, exchange and quote young talents, and inject “power of talent” into promoting high-quality development. (Wang Chen, Xie Yongqian)