Skip to content
In the hot summer, it is easy to have mood swings, coupled with pressure from work, life and other aspects, if you stay in this negative mood and negative state for a long time and cannot be relieved, it is likely to develop into emotional problems. such as anxiety. According to the data from the Global Burden of Disease Study, the global prevalence of anxiety disorders in 2017 was 3721.764 cases per 100,000 people, ranking first among mental disorders.
Xing Jia, deputy chief physician of the Department of Psychosomatic Medicine, Oriental Hospital of Beijing University of Traditional Chinese Medicine, introduced that anxiety disorder is a neurosis characterized by persistent anxiety or recurrent panic attacks. Sexual disorder, often accompanied by autonomic symptoms and motor tension, including acute anxiety and chronic anxiety. Acute anxiety is mainly manifested as panic-like attacks. Typical symptoms include palpitation, chest tightness, suffocation, nervousness, increased blood pressure, sweating, and in severe cases, a feeling of dying, similar to the illusion of a cardiovascular disease attack, and the attack usually lasts for a few minutes. or may ease or disappear after a few hours. Acute anxiety often occurs on the basis of chronic anxiety. More people in life are mainly chronic anxiety attacks, which are typically characterized by five major symptoms, namely palpitation, chest tightness, chest pain, insomnia, fatigue, nervousness, irritability, and some physical symptoms. Accompanying symptoms, such as nervousness, cold sweats, nausea, bloating, constipation, etc.
If the above symptoms occur frequently, it is recommended to go to the hospital for a clear diagnosis and symptomatic treatment as soon as possible. Xing Jia pointed out that many people think that some emotional episodes in life are caused by personality defects, and they think that diseases can be overcome by will, but they do not know that long-term negative emotions will affect brain function, and they also ignore that mental illness originates from brain function. unusual fact.
Faced with anxiety, we must learn to soothe ourselves, do a good job of self-positioning, and reduce self-stress. When anxious, avoid repeated symptoms, abdominal breathing, can reduce the reaction of rapid breathing and sweating. Exercise your limbs to relieve stress, such as chest expansions and deep breathing, or go outdoors. Reasonable use of self and environmental resources, such as past successful experiences, desire to achieve goals, own advantages, the power of role models, and support systems such as care from family and friends, to maintain physical and mental health.
A small test will help you find out if you have anxiety. Please answer whether there are any of the conditions described below and the frequency according to your own conditions in the past two weeks, and finally add up the scores of each group. 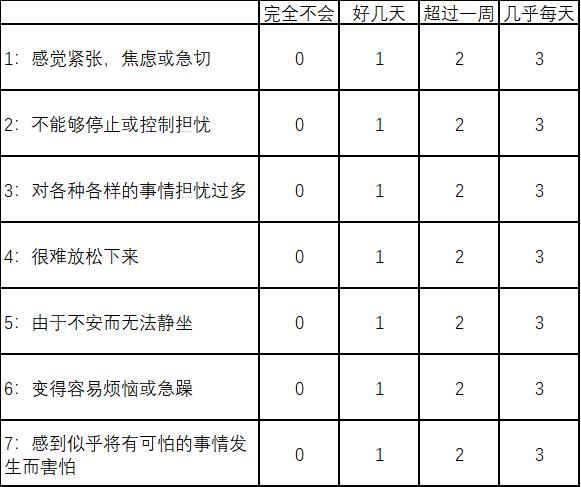