At 22:00 on April 17, 70 people from the Hospital of Integrated Chinese and Western Medicine of Southern Medical University The nucleic acid sampling medical team successfully completed the support mission in Baiyun District, Guangzhou and returned to the hospital. Two days and two nights of out-of-office support made everyone a little tired, but a young doctor named Li Shaosa still had a patient in mind. He called the patient’s son’s phone, and he was relieved after hearing the other person say, “It’s much better now, fortunately it’s not a myocardial infarction…”. The patient was rescued by him at the nucleic acid test site that afternoon.

“An old man suddenly felt unwell, and urgently asked for ambulance!” “Take me here!” 5:00 pm on the 17th 30. At the nucleic acid sampling site on Longgui Street, Baiyun District, Li Shaosa, who had just taken off his protective suit, was preparing to eat when he heard the call from the staff. He rushed out immediately and trotted all the way to the patient. I saw the old man slumped on a stool, leaning on the iron rod, and he needed someone else to support him to sit firmly. The old man closed his eyes, his face was pale, he was sweating, and he was short of breath. Upon questioning, the old man said that he had chest tightness and had a history of hypertension and coronary heart disease. Considering that the old man had a heart attack, Li Shaosa found Compound Danshen Dropping Pills in the small bag that the old man carried and fed him to take it. 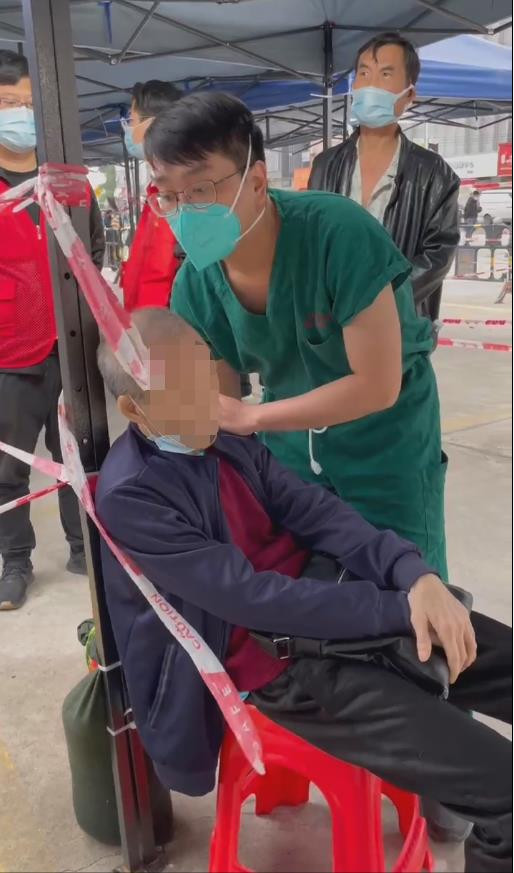 Li Shaosa first-aid the elderly at the scene

While waiting for the ambulance and family members, Li Shaosa used a pointer to help the elderly The elderly massage acupuncture points, soothe the elderly, and the elderly’s condition gradually eases. About 10 minutes later, the family and the ambulance arrived. Seeing the old man get into the ambulance, Dr. Li left with confidence. The crowd, staff and team members at the scene gave him thumbs up.

“Every time I go out, I bring two boxes of silver needles in my carry-on luggage, so that I can help others at any time. Today I also brought silver needles in my luggage, but I just changed my clothes and left. I was in a hurry and didn’t have time to take it with me.” Li Shaosa revealed that he had used traditional Chinese medicine to save people before. “In June 2019, on the train from Hunan to Guangzhou, I heard an emergency call for help from the train broadcast saying that a woman had fainted. I ran over immediately and found that she was overexcited because of her emotions. I pressed a few buttons for her. Acupuncture points were used to assist her to lie down with her head down and her feet high, and the situation gradually eased.”

“I joined the party on January 19, 2016. Young party members should follow the steps of their predecessors and learn from their spirit of treating illnesses and saving lives.” As a young party member doctor, Li Shaosa has participated in every outpatient nucleic acid sampling support organized by the hospital, which has been counted countless times so far. “When I first participated in the anti-epidemic fight last year, I didn’t tell my parents. Once, when I was replaced by a team member, I found that there were more than a dozen missed calls on my mobile phone, all from my parents. It turned out that they found out on the Internet that I was fighting against the epidemic. At the scene of the epidemic.” Li Shao said with a smile that his parents were very supportive of him after learning about the situation, and told him to “be careful outside and pay attention to rest.”

“We were born under the red flag and grew up in the sun We are waiting for orders at any time to go to the place where we need us the most.” Li Shaosa, a member of the doctor’s party, said when renewing the oath under the party flag with the team members. 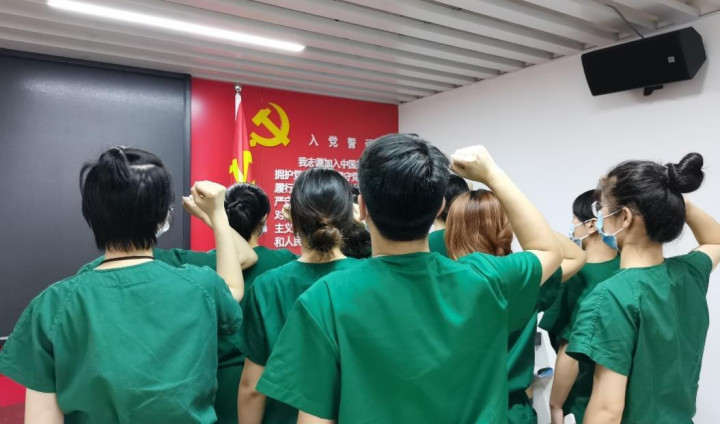 Before an anti-epidemic mission, Li Shaosa led the team members to review the oath of joining the party