In 2019, Mr. A, 84, suddenly developed headaches and blurred vision. He usually has high blood pressure. He thought it was a symptom caused by poor blood pressure control, so he went to the hospital for routine examinations. The results were surprising: MRI of the head showed that Mr. A had a focal lesion (about 3 cm) with mixed cystic and solid components in the left superior temporal gyrus, and there was a high signal lesion in the left occipital lobe. Considering Mr. A’s usual smoking habit and past history of tuberculosis, the doctor suggested that he complete a chest CT examination, and found a two-centimeter mass in Mr. A’s left upper lung.

Once a diagnosis is made, a treatment plan is established. Mr. A is old and has brain metastases, so he is no longer able to undergo radical surgery. According to Mr. A’s individual condition, the doctor performed stereotactic radiotherapy (SBRT) for the primary lung lesions and brain metastases. After the treatment, he was prescribed EGFR mutation, which can penetrate the blood and brain well The barrier’s third-generation EGFR-TKI, Osimertinib.

However, in a curative effect evaluation shortly after osimertinib treatment, although Mr. A’s original lesions had shrunk, head MRI showed that new lesions appeared in his brain, suggesting that The tumor may have intrinsic resistance to osimertinib, and Mr. A received cranial radiotherapy again.

Considering the progression of the disease, Mr. A underwent a systemic evaluation before receiving another systemic treatment, and found that there were also multiple metastases in the liver at this time (Figure 1). The pathological results of ultrasound-guided puncture of the liver tumor suggested that Mr. A had complex small cell lung cancer at this time, which may be a transformation of small cell lung cancer combined on the basis of adenocarcinoma. Facing Mr. A’s systemic disease progression status, taking into account the histological type of compound small cell lung cancer and Mr. A’s age, physical condition and other individual factors, the team of doctors discussed and formulated a formula for him. Dose-optimized triple systemic therapy regimen: durvalumab (Infineum) 15 mg/kg, etoposide + cisplatin (70% of the standard dose). After Mr. A received the first treatment, after close monitoring, he had no other systemic symptoms except for the weight loss, and the tolerance was quite good.

He then underwent two more cycles of treatment. The efficacy evaluation results showed that the liver metastases treated by Mr. A’s triple therapy were significantly smaller than before, and no new lesions appeared; the blood CEA level also decreased significantly (Figure 2). After another six months, the re-examination found that Mr. A’s liver metastases were further reduced to less than 1 cm, and most of the original brain metastases disappeared. 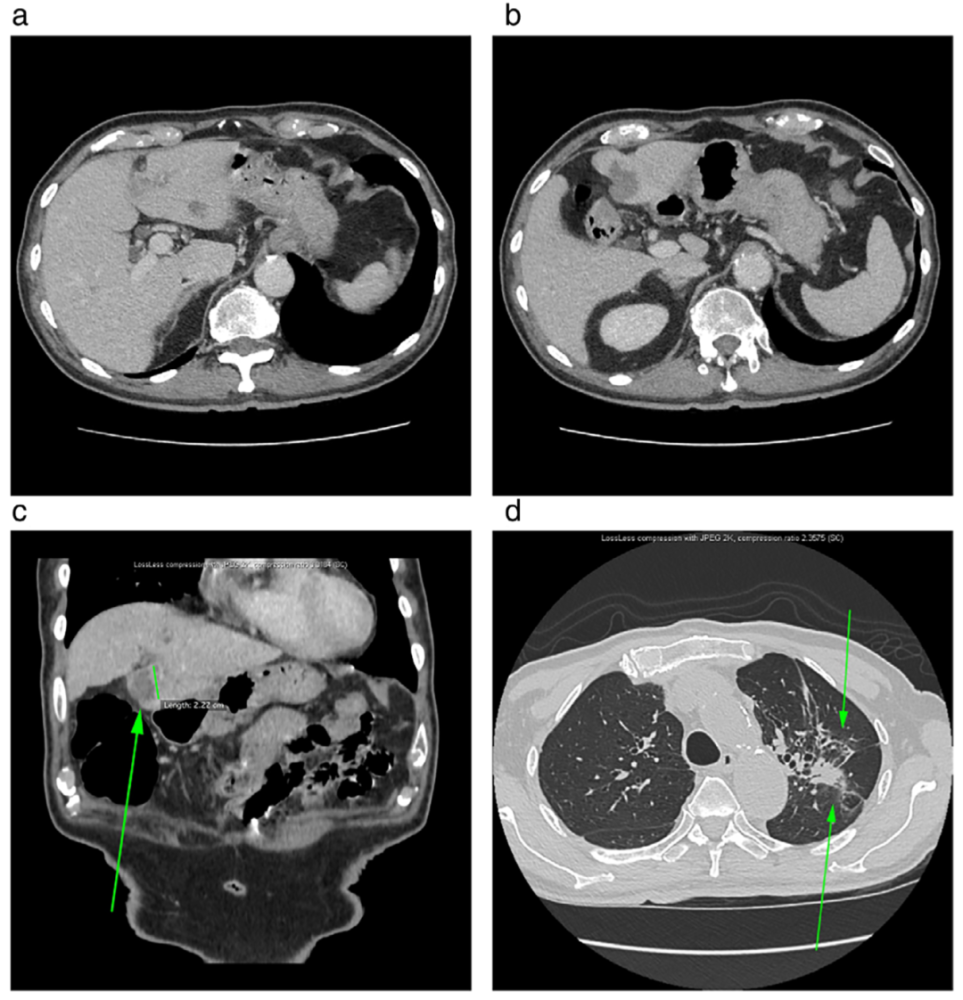 Figure 2. Imaging of Mr. A after 3 cycles of triple therapy (a, b, c) CT scan of liver metastases; (d) lung CT at the same time point

After six cycles of triple therapy, Mr. A has been receiving durvalumab maintenance therapy. In the blink of an eye, it is the end of 2021, at which time it has been 19 months since Mr. A was diagnosed with lung cancer. At this time, the re-examination found that the efficacy of Mr. A’s liver lesions almost disappeared, and the lung lesions were also in a stable state (Figure 3). Mr. A struggled with lung cancer for 19 months from his diagnosis of lung cancer to his last follow-up in December 2021. His individualized treatment strategy can be described as very successful. On the basis of adenocarcinoma combined with small cell lung cancer transformation, a dose-optimized immunotherapy combined with chemotherapy-based systemic treatment strategy was used to achieve remission of the lesions. His treatment process gave us some inspiration (Figure 4). 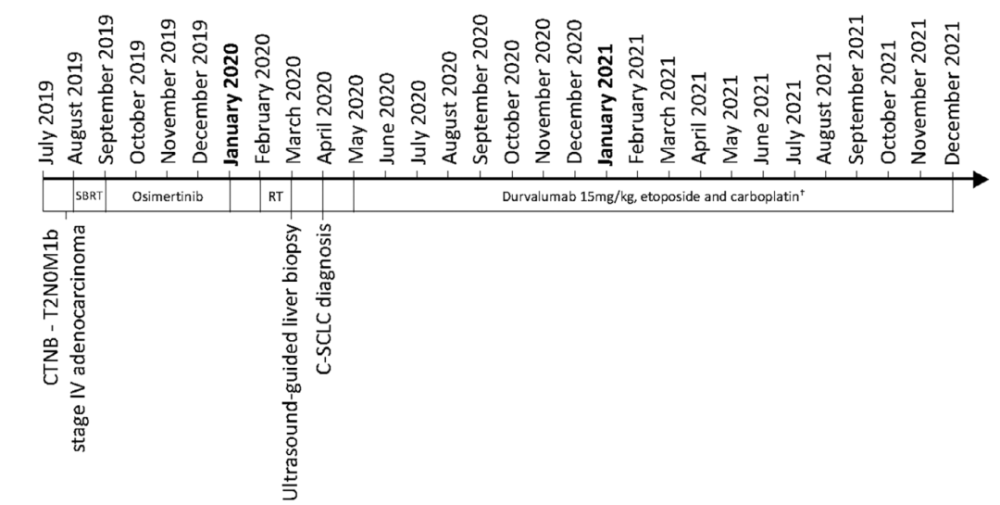 For patients with genetic mutations, if drug resistance to targeted drugs occurs, when specimens can be obtained, they should cooperate with doctors to obtain tumor lesions to discover the specific resistance mechanism, so as to facilitate timely according to the situation. Adjust the treatment plan. Just like the case above, non-small cell lung cancer has undergone small cell lung cancer transformation, and the disease progresses again and again. The patient and the doctor did not lose confidence, but adjusted the treatment strategy in time according to the overall situation of the patient. Faced with setbacks, this positive mental state is an important part of helping patients overcome cancer.