According to Healthy China, 31 provinces (autonomous regions and municipalities) and the Xinjiang Production and Construction Corps reported 361 new confirmed cases from 0 to 24:00 on August 5 Among them, 51 were imported cases and 310 were local cases; 343 new asymptomatic infections were reported, including 68 imported cases and 275 local cases. 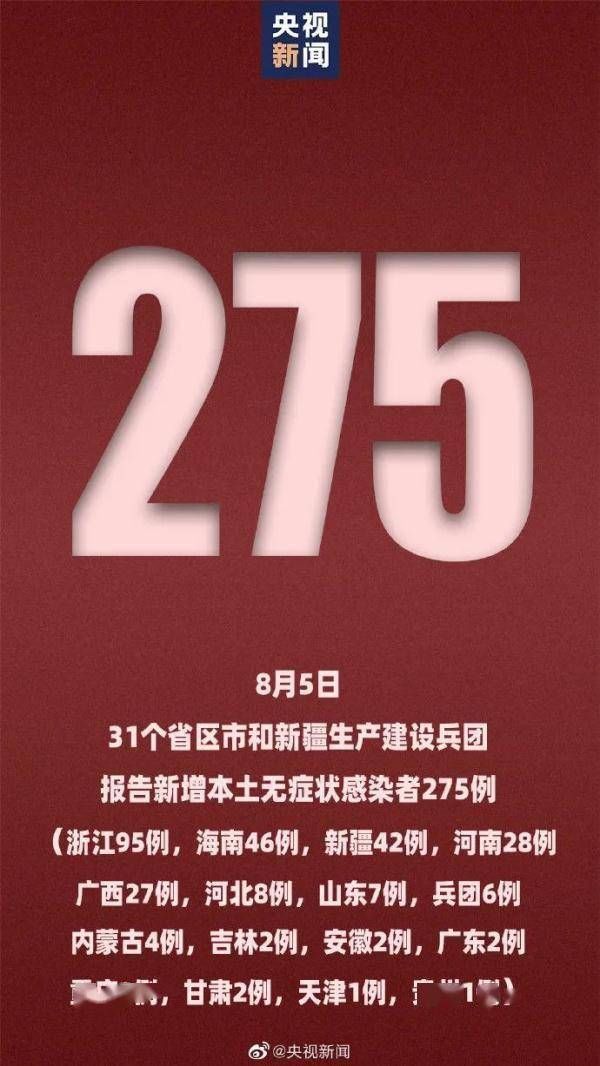 The above cases have been transferred to designated hospitals, epidemiological investigations have been carried out, and control measures have been implemented as required.

In order to effectively control and reduce the risk of the spread of the epidemic, the Beijing Center for Disease Control and Prevention reminds the general public that those who have the following circumstances, Please report immediately:

People who intersect with the published case track;

Received calls from CDCs at all levels in other provinces (cities, counties, districts) to inform close contacts and other risk personnel.

Those who have relevant travel history and have already entered Beijing, and those who receive a pop-up reminder of the health treasure, please take the initiative to report to the community, unit, hotel, etc. immediately, and cooperate with centralized isolation, home isolation, and health monitoring , nucleic acid testing and other prevention and control measures;

Transportation hubs such as airports, stations, road checkpoints, hotels, hotels, homestays, schools and other units to strengthen inspection and control, and strictly implement temperature testing in accordance with relevant regulations code, inspection of nucleic acid certificates and other prevention and control measures. Risk personnel should be reported to relevant departments such as the community (village) where they are located in a timely manner and cooperate with the implementation of control measures.

Home quarantined persons and co-residents are not allowed to go out during home quarantine. Once symptoms such as fever, dry cough, expectoration, sore throat, fatigue, diarrhea, abnormal sense of taste, abnormal sense of smell, etc. appear, do not buy medicines, Those who take medicine, do not take public transportation, do not use online car-hailing, etc., need to report to the community immediately, collect specimens for testing, and take corresponding control measures.