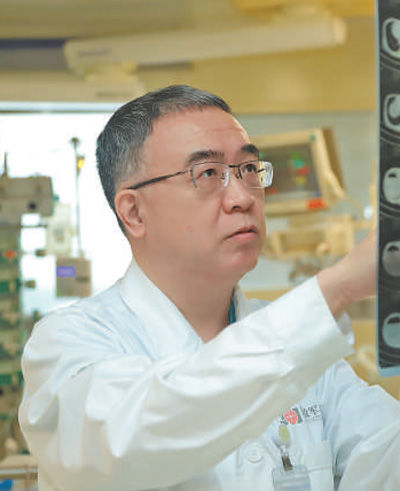 At 6:30 in the morning, Zhou Feihu, director of the Department of Critical Care Medicine of the First Medical Center of the PLA General Hospital, appeared in the hospital on time to check the patient’s diagnosis and treatment records and judge the patient’s latest condition… After completing these tasks, It’s not even 8 o’clock.

“Patients entrust their lives to us. Even if there is only a glimmer of hope, we must do our best to treat them.” Zhou Feihu said.

Over the past few years, Zhou Feihu can be seen in urgent and dangerous tasks such as earthquake relief, aid in Africa to fight Ebola virus, and international peacekeeping.

Since the outbreak of the new crown pneumonia epidemic, Zhou Feihu, as the main member of the expert group for the treatment of patients with new coronary pneumonia in the People’s Liberation Army General Hospital, has been fighting on the front line of the fight against the epidemic. In 2020, Zhou Feihu acted upon the order and led a team to Pakistan to carry out the task of fighting against the new crown pneumonia epidemic.

“He took the lead and bravely shouldered heavy burdens. He deserves to be our ‘Captain Flying Tiger’!” Xu Yinzhe, an attending physician at the Department of Hepatobiliary and Pancreatic Surgery, First Medical Center of the PLA General Hospital, recalled that experience and was still excited.

In 2020, a military cadet developed dizziness, chills, fatigue and other symptoms during training. At that time, he was sent to a local hospital for the first time and was diagnosed with heat stroke, and was then transferred to the Department of Intensive Medicine of the First Medical Center of the PLA General Hospital. Under the careful treatment of Zhou Feihu and his team members, he went from coma to awake, and his health gradually improved.

Over the past few years, Zhou Feihu has overcome difficulties such as plateau hypoxia, went to the Ali Plateau in Tibet three times, participated in the construction of an intelligent monitoring ward in a field hospital, and provided medical support for the officers and soldiers on the plateau.

Zhou Feihu has carried out systematic scientific research on labor-type heat stroke that may be caused by soldier training, promoting clinical development with scientific research, and greatly improving the success rate of critically ill treatment. He also participated in the training of medical staff of the grassroots army for many times, and achieved good results.

In Zhou Feihu’s view, the intensive care unit often treats the most serious and complicated patients, but as long as we adhere to the belief of “support life and never give up”, we can still support the patients here. Miracle of life.

Receiving a call from the hospital late at night, he quickly went out and rushed to the operating table; facing the expectant eyes of the patient’s family, he did his best to treat and never gave up; when other departments encountered intractable diseases, he did not give up. Hesitant and enthusiastic support… Zhou Feihu always appears at the first place where patients need it most, racing against time and fighting the disease.

“Intensive care unit witnesses not only medical miracles, but also the benevolence of doctors.” Under the impetus of Zhou Feihu, he celebrated birthdays for patients, shook hands with patients from time to time, talked more… these warm hearts The move became the norm in intensive care units, helping more patients recover faster.

With the joint efforts of everyone, the success rate of treatment in the Department of Critical Care Medicine of the First Medical Center of the PLA General Hospital has remained above 95%, and countless critically ill patients who once struggled on the line of death have been reborn.

“The patient’s recovery is the greatest compliment to us.” Zhou Feihu said, “I am a people’s military doctor. When the patient needs me, I am always ready to ‘fight’ to save lives!” ( Reporter Liu Botong)