China Jiangsu Net, August 4, Zhenjiang News, Mr. Ge, 57, has been coughing continuously since the beginning of August last year. A tumor was found in the lungs, and he was transferred to Zhenjiang First People’s Hospital. He was diagnosed with lung cancer and had multiple lymph node metastases. The stage was late. Mr. Ge received chemotherapy and immunotherapy, but three months later, dizziness appeared again. The re-examination found that Mr. Ge had three metastatic lesions in his brain. The team of Wu Chaoyang, deputy director of the oncology department, director of the radiotherapy department and chief physician of the hospital, used the hospital’s latest radiotherapy “sharp weapon” to perform stereotactic radiotherapy on Mr. Ge. This “sharp weapon” is called “bloodless scalpel” by everyone.

It is understood that this is the American Varian TrueBEAM linear accelerator, which can carry out difficult radiotherapy technology – stereotaxic Radiation therapy is delivered several times, with high doses targeting the tumor precisely, while the normal tissue surrounding the tumor receives a very low dose. Compared with the general CT examination equipment, this linear accelerator has a taller “body”, but the humanized setting of the three-dimensional starry sky pattern on the ceiling above the head can effectively calm the patient’s mood. Director Wu Chaoyang said that the next step will be combined with radiotherapy and chemotherapy to further treat the lung and lymph node lesions for Mr. Ge. 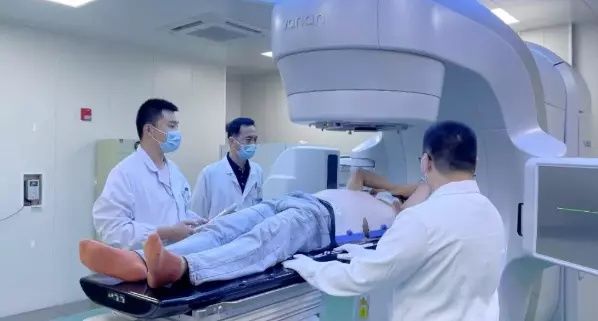 Surgery, radiotherapy, chemotherapy , Targeted therapy and immunotherapy are the common methods of treating tumors at present, and precise radiotherapy is the key technology to cure some tumors. If the patient’s lung function is not good, and the patient is old and not suitable for surgery, using this device for stereotactic radiotherapy can achieve an effect close to surgery for some tumors. At present, relying on the advantages of advanced treatment equipment and high-level talents, the radiotherapy center has performed stereotactic radiotherapy for more than ten patients using this latest linear accelerator.

It is reported that in order to cooperate with the operation of the linear accelerator and the development of new technologies and new businesses, the cancer center of the hospital has successively dispatched a number of medical staff to study in well-known hospitals such as the Affiliated Cancer Hospital of Fudan University. The university has introduced a group of physical technicians related to tumor radiation therapy to complete the training to ensure that the equipment can be put into clinical application with high quality and efficiency. (Tang Yan)

Disclaimer: The copyright of this article belongs to the original author. If the source is wrong or infringes your legal rights, you can contact us by email, we will will be processed in a timely manner. Email address: [email protected]