This article is reproduced from: People’s Daily Online-Beijing Channel 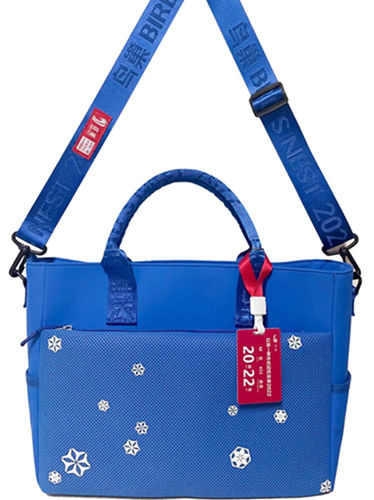 People’s Daily Online, Beijing, August 9 (Li Bo) After the Beijing Winter Olympics and Winter Paralympics, the operator, National Stadium Co., Ltd., practiced sustainable development and green environmental protection The idea is to make full use of the “Bird’s Nest” Winter Olympics seat cover, one of the Winter Olympics heritage, and develop it into a cultural and creative product.

The relevant person in charge of the National Stadium Co., Ltd. introduced that the “Bird’s Nest” Winter Olympics seat cover fabric is a high-elastic mesh fabric, commonly known as a sandwich fabric, which is a high-quality warp knitted fabric with a durable, lightweight texture. Features; and added flame retardant ingredients.

“Because the ‘Bird’s Nest’ Winter Olympics seat cover is made of flame-retardant fabric, direct destruction is not conducive to environmental protection considerations; in order to maximize reuse, combined with the size of the seat cover, the cultural and creative package It has become the preferred direction for this development.” said the relevant person in charge of the National Stadium Co., Ltd.

As for the hygiene issues that customers are worried about, the relevant person in charge of the National Stadium Co., Ltd. explained that the washing process of seat covers is highly automated, and there is no human intervention in the washing process from entering the sorting system to the completion of drying. , to avoid secondary pollution. The washing water adopts a reverse osmosis water purification system, which can completely remove 99.7% of impurities in the water such as calcium and magnesium ions, heavy metals, microorganisms, algae, suspended particles, bacteria, viruses, etc. The seat cover material that has been professionally cleaned and disinfected is bright and clean as new .

The first cultural and creative package is formed by combining the spacer snowflake seat cover and other accessories. Snowflake fabric on the front, the snowflakes of each bag will be arranged differently. Umbrellas and mineral water can be placed on the side, and each functional partition is refined by the inner compartment. The main body of the webbing uses the Chinese character of “Bird’s Nest” to show the Chinese style, and is designed with a dark pattern weaving technique, and the change of the “Bird’s Nest” font can be seen from different angles. Use artistic techniques to embellish red embroidered labels on the webbing to create a fashionable sense of cultural and creative bags.

The second and third cultural and creative packages are formed by combining the spacer snowflake seat cover and other accessories; the two are of different sizes. The second and third models feature the same custom webbing and accessories as the first. The square shape design can be adapted to the popular notebook computers in the market.

The relevant person in charge of the National Stadium said that there are nearly 90,000 “Bird’s Nest” Winter Olympic seat covers and seat covers. Creative products.