This is the third phase of our self-driving along the Yellow Highway, the Jiaxian section. Along the Yellow Highway for 184 kilometers, it enters Jiaxian County at the mouth of Tuwei River, descends 23 kilometers to the county seat of Jiaxian County, and then enters Wubaojie at 255 kilometers. The Jiaxian section is about 70 kilometers long. Along the way, there are Damei Stone Kiln, Nihegou, Baiyun Mountain, Mutouyu, Chiniu, Heyeping and other tourist spots that can be visited. 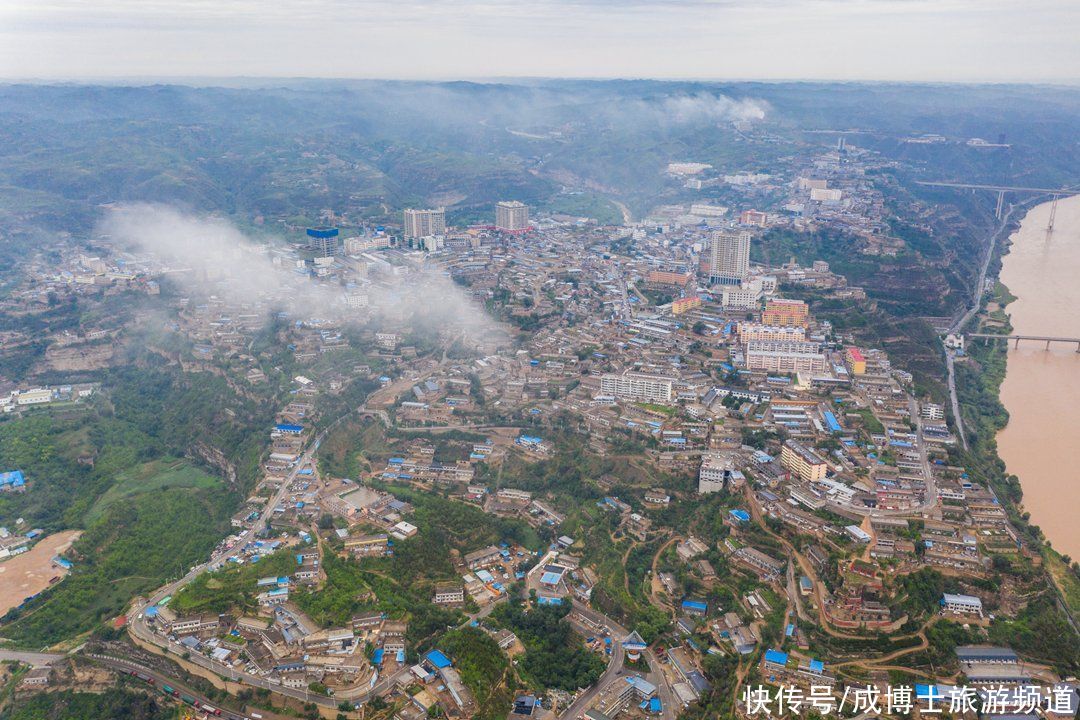 Damei Stone Kiln is along the Yellow Road into Jiaxian County The first scenic spot in the future, but it is not on the bank of the Yellow River, but 25 kilometers away from the Yellow River. It is located in Wangjiashan Village, Jiaxian County. It is a tourist attraction that has just been invested and built in recent years. Because the founder’s surname is Wang, it is also called “Wang Family Manor”. In just a few years, it has won the titles of Shaanxi Tourism Homestay Benchmarking Demonstration Unit,3A Tourist Scenic Spot, and Shaanxi Provincial Tourism Resort. 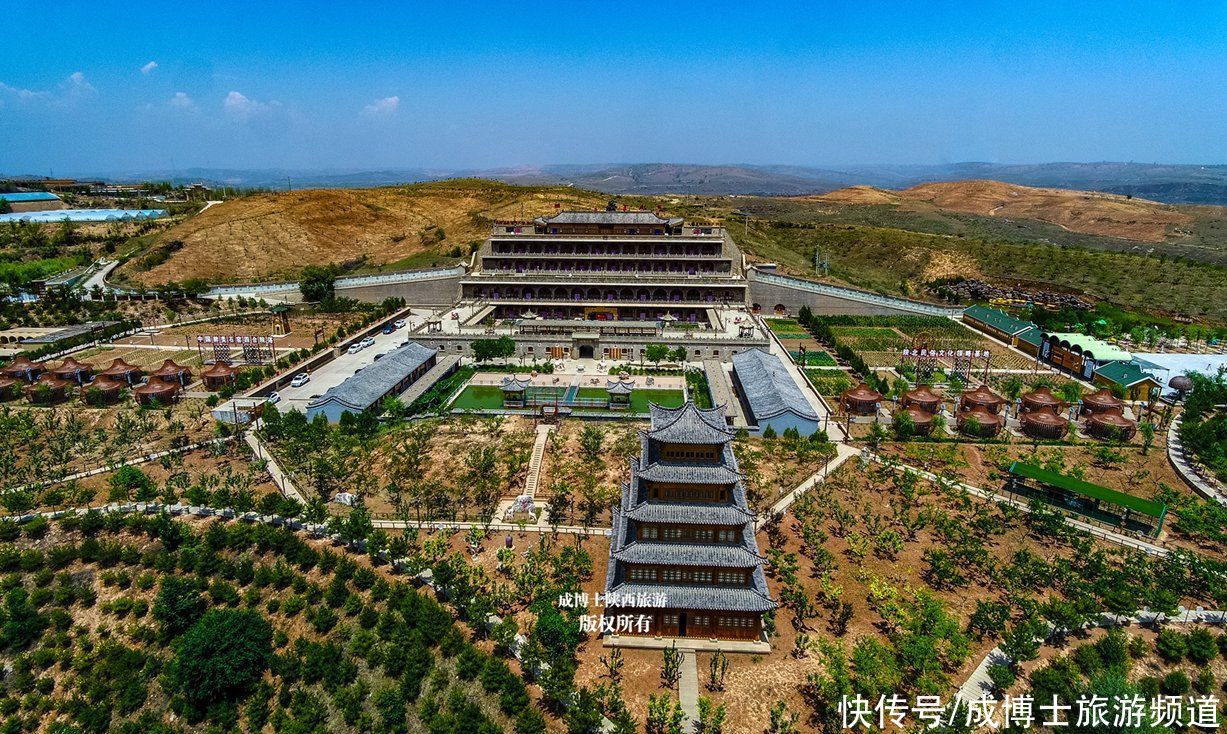 If you drive along the Yellow Highway, you can stay here for one night, where you can not only experience the stone kilns in northern Shaanxi, but also There are star tents and other places to live. As to whether it’s worth the 25km detour, that’s up to you.

Three kilometers along the Yellow Road into Jiaxian County, there is a small village called Nihegou. There is a thousand-year-old jujube tree group in Nihegou. is located on the river beach on the south side of the village, covering an area of ​​36 mu. According to statistics, there are more than 1,100 jujube trees. 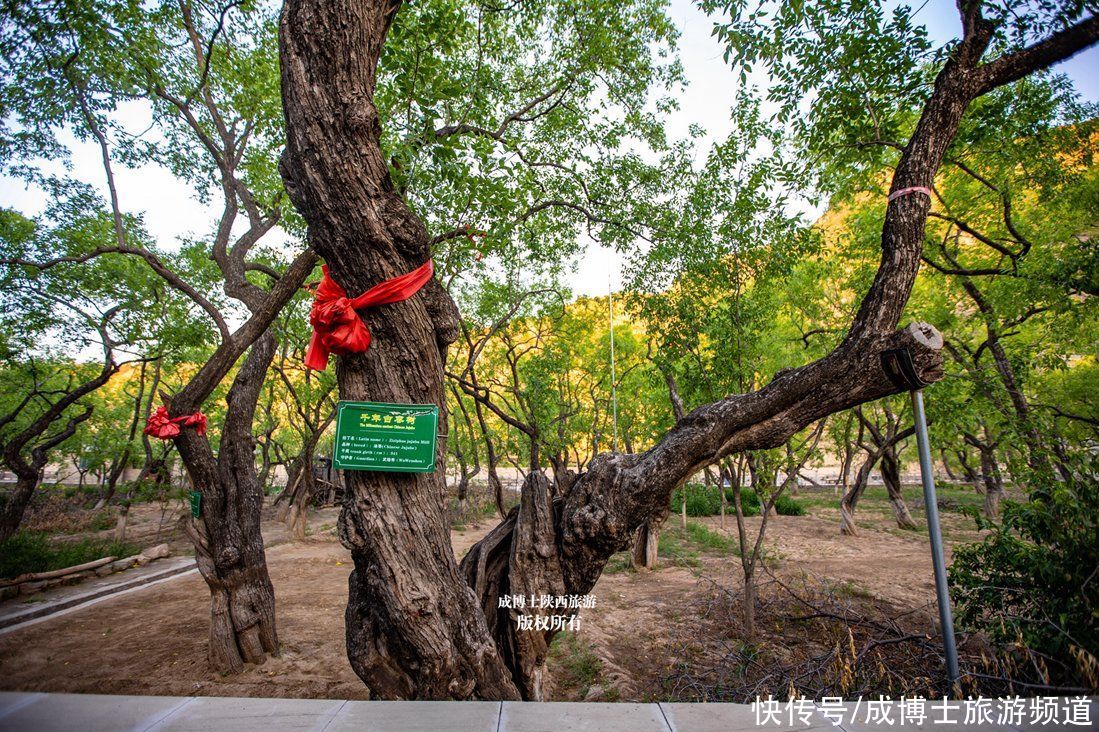 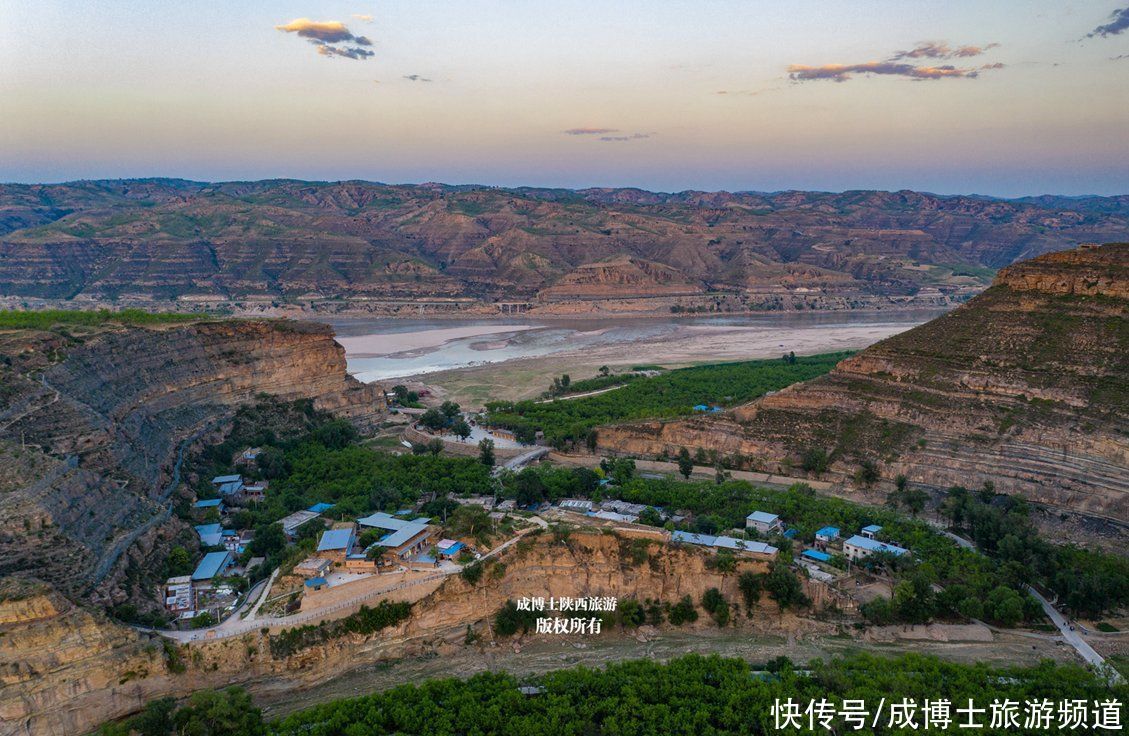 Jiaxian County is one of the three cities along the Yellow River in Shaanxi that is close to the Yellow River. one of the county towns. There is a saying in history that “Bronze Wubao, Tiejiazhou, Millennium Fuzhou City”, Jiaxian is Tiejiazhou. Jiaxian County sits on the top of Jialu Mountain, with three sides hanging in the air, looking at the Yellow River, only the north of the city is connected to the mountains. Because of its dangerous terrain and irreplaceable strategic location, it has always been a battleground for military strategists. 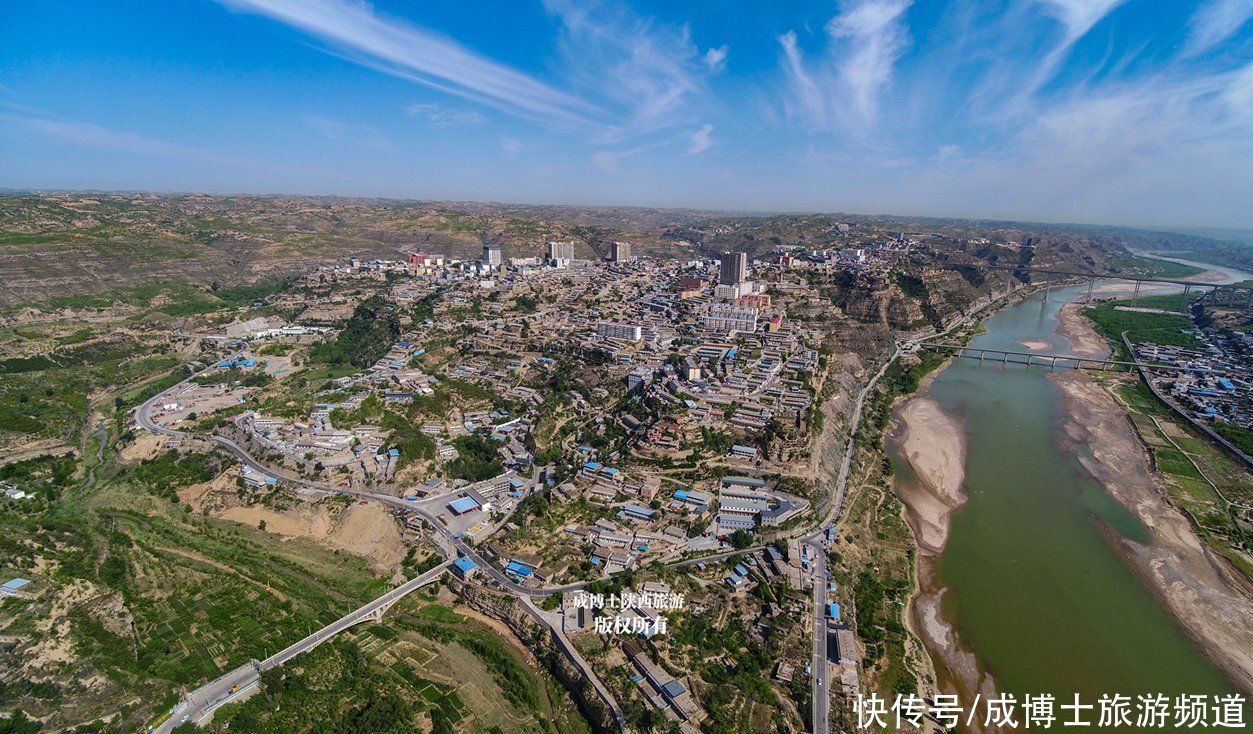 Jia Lu Village was built here in the Northern Song Dynasty. It was repaired and expanded in the past dynasties, and a steel cast steel was built on the steep cliff according to the mountain. An iron-like full scorpion-shaped city. Jiazhou City can be attacked and defended when it is advanced. There is a trend of “one husband is the gate, and ten thousand people are not open”. Looking at the Jiuqu Yellow River from the county seat of Jiaxian, one can’t help but sigh “The Yellow River is far above the white clouds, an isolated city.” The poetic and painting artistic conception of Wanren Mountain. 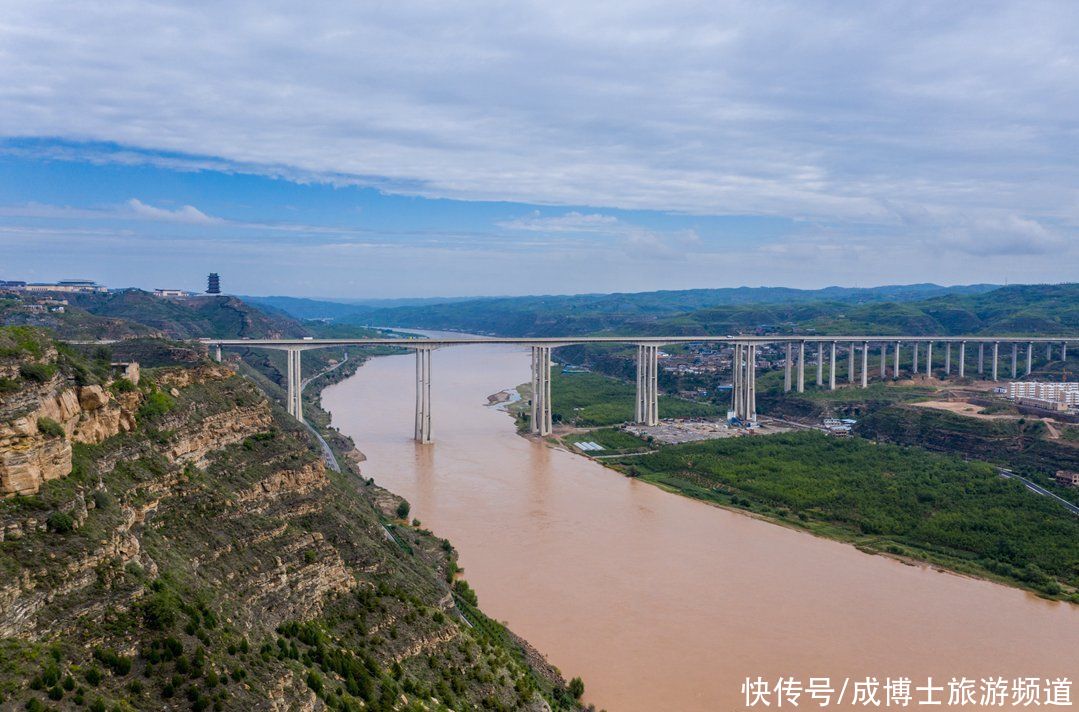 There are many scenic spots in Jiaxian County. The more famous ones are Incense Burner Temple and Yunyan Temple. Xianglu Temple is located on the top of Xianglu Peak, 200 meters east of Jiaxian County. It faces the Yellow River in the east and is absolutely empty on three sides. In front of the peak, there is a huge stone with a diameter of 5 meters and a height of more than 20 meters. It is 2 meters away from the main peak. The name of the temple is known as one of the eight scenic spots in Jiaxian County, “the incense burner at night”. 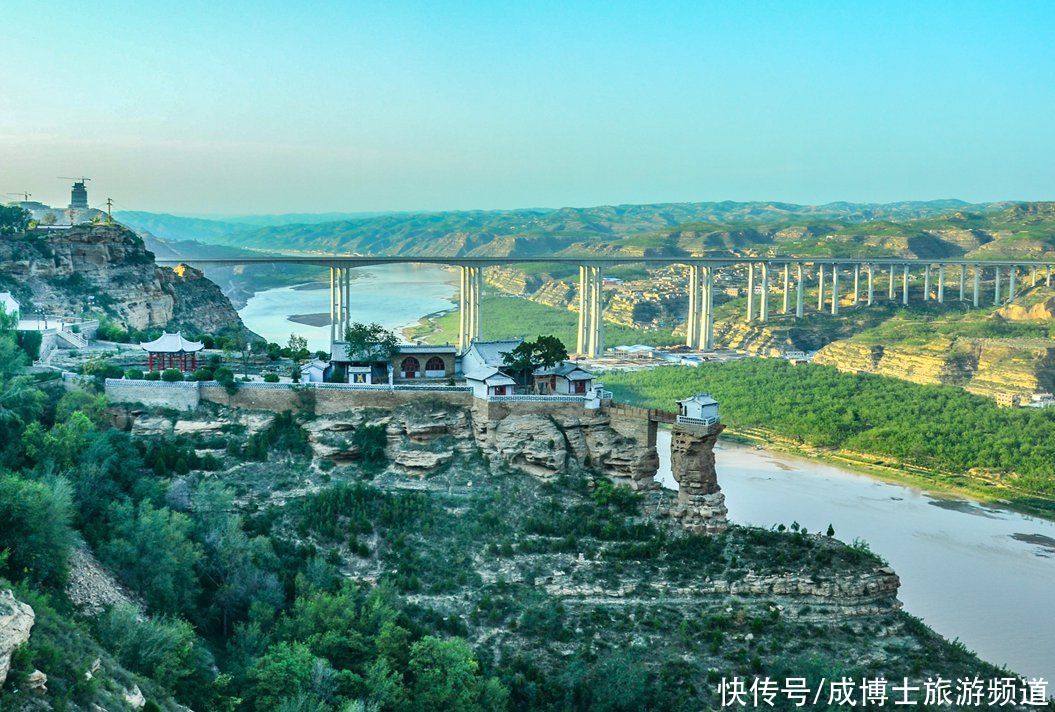 Yunyan Temple is located on the mountainside of Hutou Peak, 1 km south of Jiaxian County. in the Song Dynasty. It is composed of eight caves with uneven heights and bottoms, as well as cliff inscriptions, steles, murals, and ancient cypresses.

In recent years, Jiaxian has built a Dongfanghong Cultural Industrial Park. The reason why it is called Dongfanghong Cultural Industrial Park is because the song “Dongfanghong” was sung by Jiaxian farmer singer Li Youyuan. Li Youyuan was born in 1903 in a poor peasant family in Zhangjiazhuang Village, Jialu Town, Jiaxian County, Shaanxi Province. In 1942, Li Youyuan choreographed and sang “The East is Red”, which later became a popular red song all over the country. Li Youyuan was called “the people’s singer”. 4 kilometers north of Jiaxian County, there is a cave courtyard, the former residence of Li Youyuan, which is currently listed as a provincial key cultural relics protection unit. 5 kilometers south of Jiaxian County, the Yellow River The Shuanglong Ridge on the shore is often called Baiyun Mountain because it is often surrounded by white clouds. Baiyun Mountain has Baiyun Temple, which is a famous Taoist activity place in northern Shaanxi. Baiyun Temple was first built in the Wanli period of Ming Dynasty. After expansion in successive dynasties, there are more than 50 temple houses preserved today, with a construction area of ​​more than 80,000 square meters. 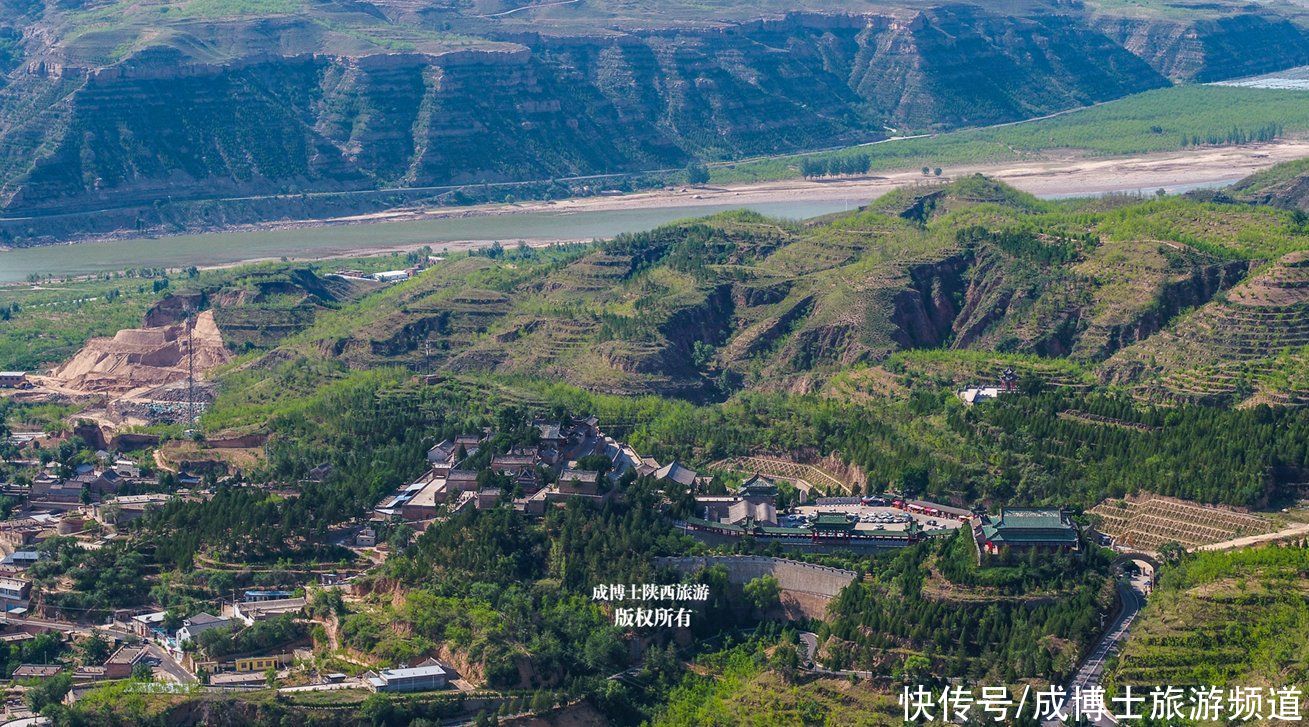 More than 1,500 colorful murals in the temple are masterpieces of ancient folk art in northern Shaanxi. The gods of Baiyun Mountain are spread far and wide, and it is known as the “Sacred Mountain in the West”. It is a national famous scenic spot and a famous Taoist mountain. Climbing to Baiyun Temple, you can also see the Yellow River Grand Canyon not far away, and the vigorous loess scenery of northern Shaanxi can be seen at a glance. 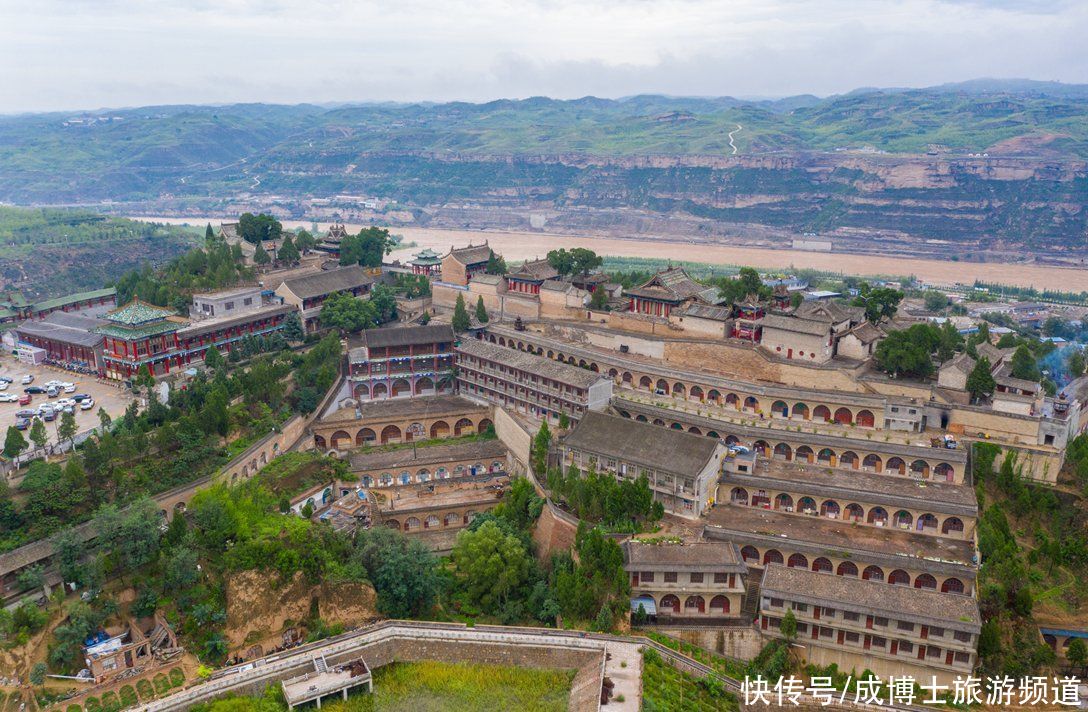 Baiyun Mountain was developed earlier and is the earliest old 4A tourist attraction in Yulin. Vacation destination. It can be said to be a must-see scenic spot along the Jiaxian section of the Yellow Highway.

16 kilometers from Jiaxian County to the lower reaches of the Yellow River, there is an ancient village, Mutouyu Village, which was once an important Yellow River water transportation terminal. The villagesurrounded by the Yellow River, sit north to south, 1 km long and 100 meters wide. The pattern of streets and lanes is well preserved. According to statistics, there are 43 courtyard houses in Ming and Qing Dynasties. In addition, there are archway, theater, Guanyin Temple and other ancient buildings. We can vaguely see the prosperity of the past. “, “Folk Culture Village”. 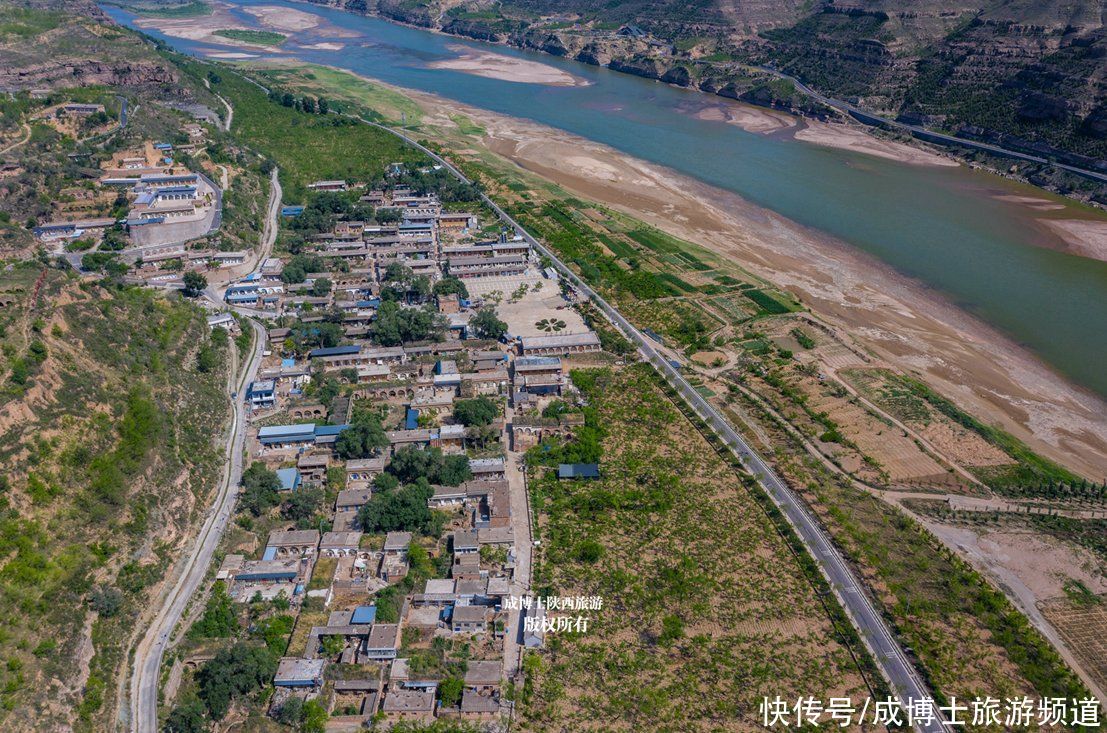 231 kilometers along the Yellow Highway, roadside There is a fork that leads to Chiniu. Chiniuyuan is one of the most distinctive rural folk tourism destinations in northern Shaanxi in recent years. It is surrounded by mountains on all sides, jujube trees are stacked, and the cave dwellings are arranged according to the mountains. 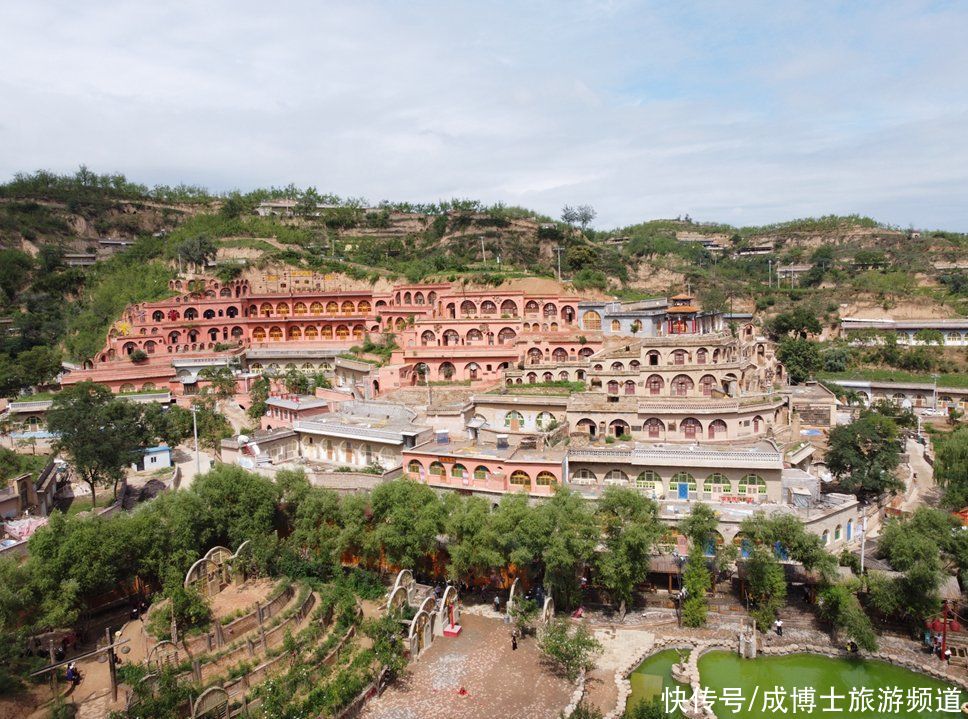 In recent years, Chi Niu Chuan has created a large-scale live-action drama “A Cow on a High Mountain”, farming, tamping , marrying, praying for rain… These scenes of the production and life of the ancestors of the northern Shaanxi people are now vividly reproduced in Chiniu, allowing tourists to experience the authentic northern Shaanxi cultural feast. The annual “New Year’s Eve” activity in Chiniu Nuan has become an important part of the New Year’s culture in northern Shaanxi. 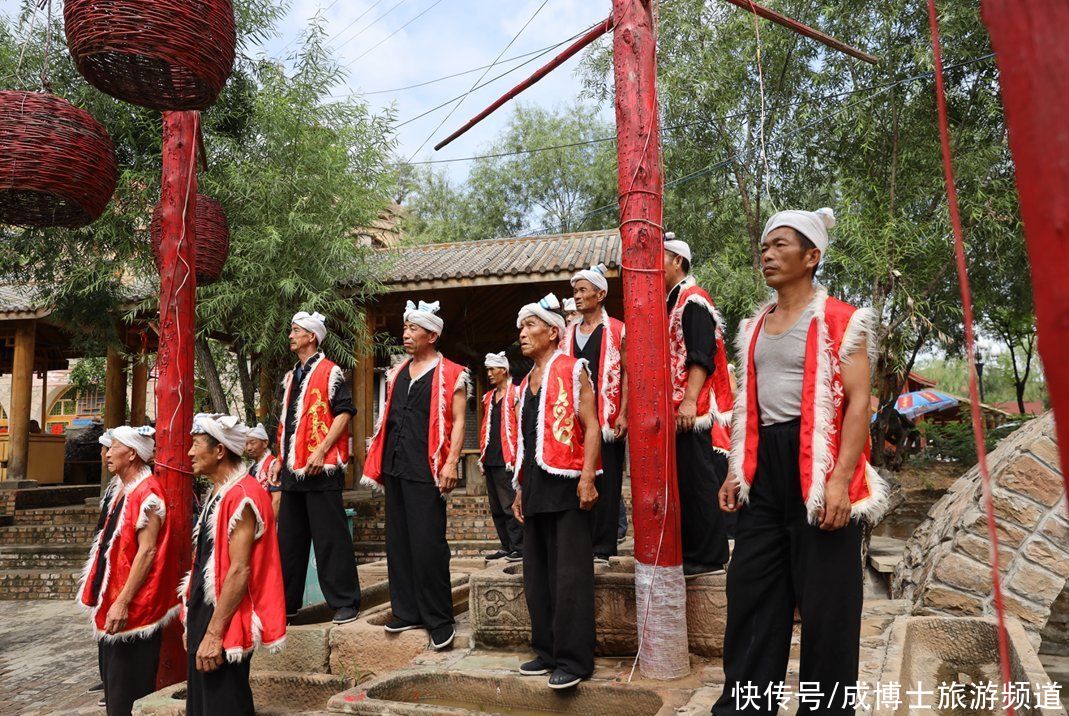 240 kilometers along the Yellow Road, there is a stone tablet on the side of the road. Above is the famous calligrapher Lei Zhenmin’s “Ninety-nine Bays of the Yellow River in the World”, which is the Heyeping Village. Heyeping belongs to Jiaxian Township, an ordinary village along the Yellow River. The reason why He Yeping is famous is because of a song. 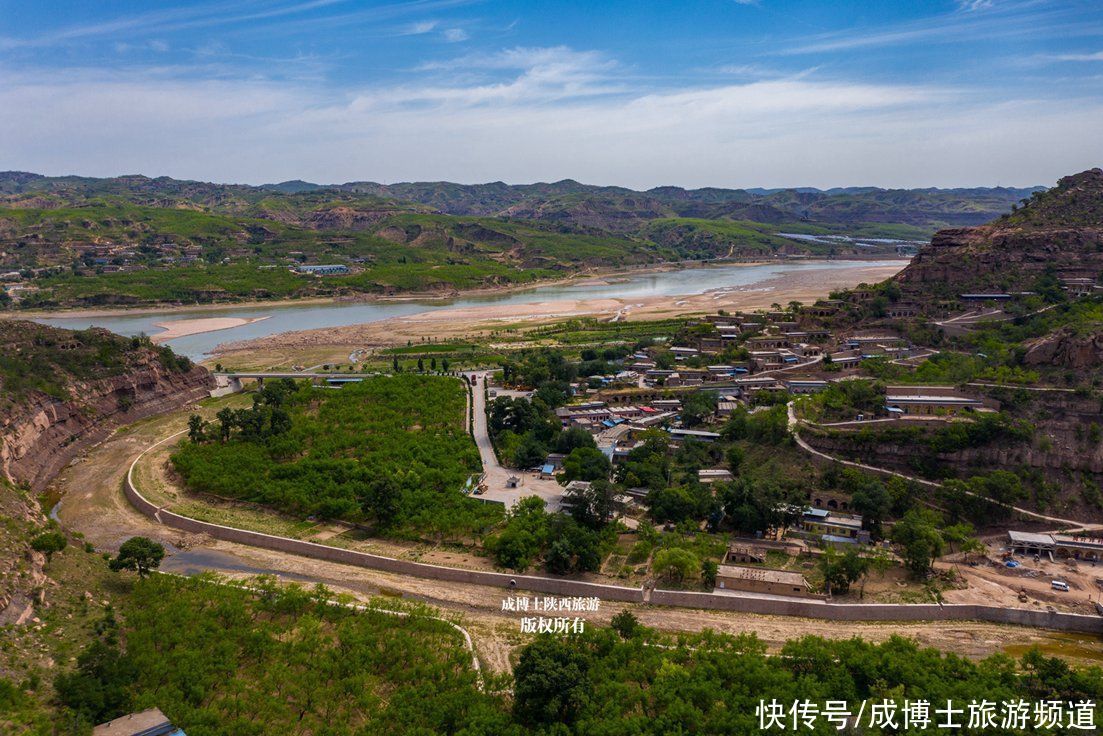 This song is the famous “Ninety-nine Bays of the Yellow River in the World”, also known as “Yellow River Boatman Song, with its concise and deep melody, simple and full of historical vicissitudes of words and phrases, has become a representative piece of Yellow River music culture. And the author of this song, Li Siming, is from He Yeping. Li Siming was born in Heyeping in 1891. When he became an adult, he worked as a boatman on the Yellow River. He has a good voice, composes and sings in his spare time, and has become a generation of folk artists. His representative work “The Ninety-nine Bays of the Yellow River in the World” is compiled and created on the basis of folk songs.

Attachment: Lyrics of “Ninety-nine Bays of the Yellow River in the World”

Do you know how many bays of the Yellow River in the world?

How many dozens of boats are on the bay?

How many boats, how many rods?

Dozens of those stern men come to move the boat?

I know that there are ninety-nine bays on the Yellow River in the world.

Ninety-nine bays On the boat, there are ninety-nine poles,

Ninety-nine sterns are here to move the boat.