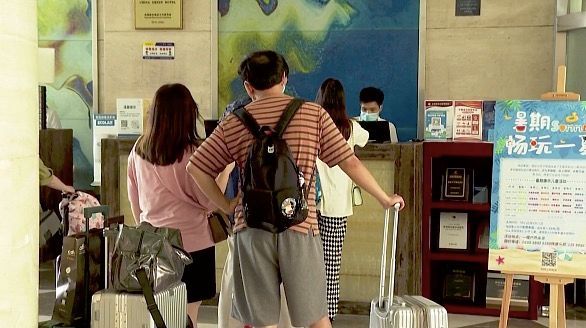 Because of a wave of new coronary pneumonia that started in Yazhou Fishing Port, 80,000 passengers were trapped in Sanya. Before that, few people could have imagined that Sanya, which is regarded as a “tourist paradise”, would become the place where the new coronavirus Omicron variant BA.5.1.3 “landed” for the first time in China. This unfortunate fact has created a lot of difficulties for the prevention and control work in the place where the epidemic occurred.

A large number of foreign tourists originally only wanted to spend a few days in Sanya, but now they have to be placed on the spot, waiting for the “unblocking”. Local authorities are also facing unprecedented challenges. Whether it is for the local government or ordinary tourists, this is an unpredictable “unpredictable disaster”. Those affected by this epidemic also deserve the support and care of the society.

In the face of the menacing epidemic, it was the first time that the relevant departments of Sanya City had faced such battles. At the same time, when travel plans are completely disrupted by the epidemic, stranded passengers will inevitably feel angry, anxious and highly nervous. Under such circumstances, it is quite normal for both parties to have some conflicts and frictions due to practical difficulties and misunderstandings in communication. As long as they can calm down, it is not difficult for tourists and the government to understand each other. In this regard, mainstream public opinion should also avoid blindly “standing in line”, and should not rashly hit one side with criticism, but should encourage both sides to think differently and overcome difficulties together.

However, although most people understand this truth, there are still some netizens who lack empathy and are keen to “stand in line” on various Internet platforms. Under the “artillery” of these malicious remarks, those who suffered the most unprovoked attacks were those unfortunate travelers who were stranded in Sanya during their travels and unable to return home. If you open the comment area of ​​relevant news or social media software, you can see many offensive speeches accusing these passengers of being “dishonest”, “self-inflicted”, “have to run around”, “hypocritical” and “eventful”.

Under the threat of “Omicron”, many places have experienced long or short periods of lockdown and epidemic prevention. People living in these places have been “holding back” for a long time. After the unblocking, they will naturally have a desire to travel to change the environment and breathe. At the same time, as the epidemic has dealt a big blow to the tourism industry, tourist cities represented by Sanya also need to boost popularity to drive local recovery, so many tourism advertisements have been put out across the country. Under this circumstance, tourists traveling across provinces are by no means irresponsible, harming others and benefiting themselves, but a good thing that can be justified and can achieve a “win-win” with the tourist destination. Today, 80,000 tourists are trapped in Sanya due to the epidemic, a situation that no one can predict and do not want to see. Therefore, attacking passengers, no matter how you look at it, makes no sense. It will only create conflicts out of thin air and add chaos to the current prevention and control work.

On the other hand, those cyber attackers who “stand and talk without back pain” seem to never go out or travel. Before the incident, they had never seen them dissuade other netizens from traveling across provinces, and when they saw other people suffer misfortune, they jumped out hastily and showed their reason and wisdom in a “post-event” way. Obviously, it is something that all parties involved deserve sympathy. They have to find the “responsible person” and use it as a target to criticize. In terms of popular concepts on the Internet, these people can be described as out-and-out “keyboard warriors”. In this regard, the majority of netizens should also keep their eyes open and make accurate identifications, so as not to be led astray by these people. In the final analysis, it is not the fault of tourists who go out to travel. They deserve attention and concern, not biased accusations or even cyber violence.

Among these malicious remarks against tourists, there is a type of remarks that are quite confusing, that is, pretending to stand on the side of Sanya City and “teach” those “unsavvy” tourists for the local authorities. At first glance, the starting point of these remarks seems to be “supporting Sanya”, but upon closer inspection, the views expressed are unlikely to be the true positions of the relevant departments of Sanya and local citizens.

As one of the most popular and prestigious tourist destinations in China, the importance of tourism to the local government and citizens is self-evident. “Hospitality” is also a city label that Sanya has been committed to creating. The more “extraordinary circumstances” like today are, the more it can demonstrate the ability and determination of a tourist city to do a good job in guaranteeing tourists. Individuals are artificially opposing the relationship between Sanya and tourists at this time, not really for the good of Sanya. In this regard, the public should also take a clear stand against this artificially creating contradictions, and form a “joint force of public opinion” that promotes unity and emphasizes tolerance.