A new study confirms that low sodium salt reduces the risk of heart attack, stroke, cardiovascular death and all-cause death; with this At the same time, the protective effect of low sodium salt on cardiovascular and cerebrovascular diseases is also applicable to everyone around the world, regardless of the country and population. A recent achievement, “The Impact of Low Sodium Salt on Clinical Outcomes: A Systematic Review and Meta-Analysis”, was completed by Tian Maoyi, a Distinguished Professor at the School of Public Health of Harbin Medical University and an Honorary Senior Research Fellow at the George Institute for Global Health, University of New South Wales, Australia. On August 10, 2022, it was published online in the latest issue of the British Medical Journal, the official journal of the British Cardiovascular Society, Heart. 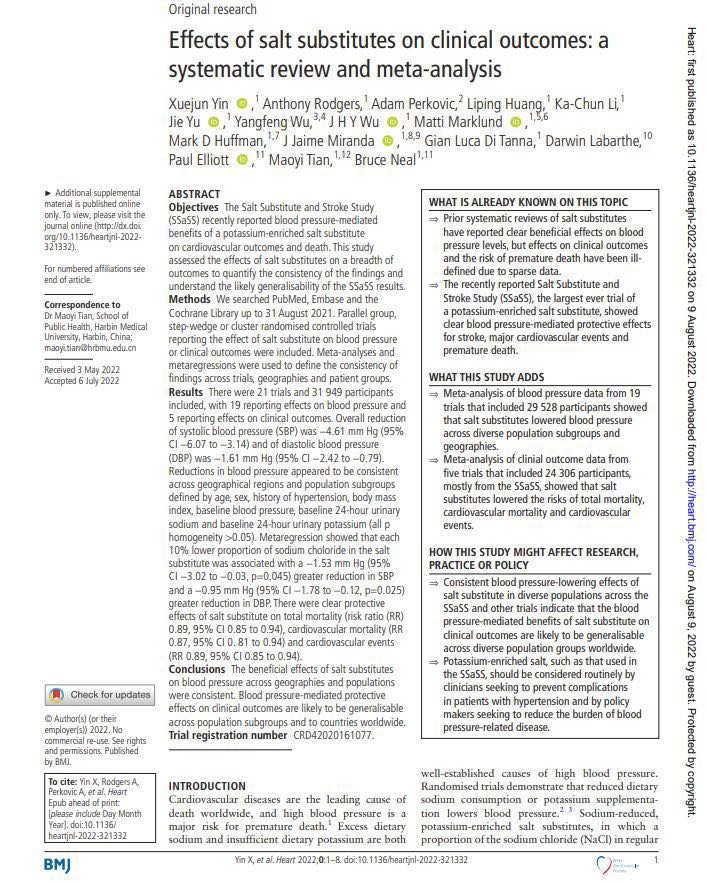 Cardiovascular and cerebrovascular diseases are the leading cause of death worldwide, and elevated blood pressure is the main risk for cardiovascular and cerebrovascular events . The main dietary factors that lead to elevated blood pressure are excessive sodium intake and low potassium intake. The main source of dietary sodium is table salt, which is close to 100% sodium chloride. Low-sodium salt is a low-sodium and high-potassium salt product, in which a part of sodium chloride is replaced by potassium chloride, which reduces the proportion of sodium without reducing the salty taste. pressure purpose.

Before this, a number of domestic colleges and universities and disease prevention and control institutions worked together to tackle key problems, and 20,995 people were enrolled in 600 villages in 5 provinces, including Liaoning, Hebei, Shanxi, Shaanxi, and Ningxia. The world’s largest study on the relationship between low sodium and stroke (SSaSS study) was conducted in patients at high risk of stroke or stroke. The main results of the study will be published in August 2021 in the New England Journal of Medicine, the world’s leading medical journal.

After 5 years of follow-up, the study compared low-sodium salt with regular table salt and demonstrated for the first time that low-sodium salt reduces stroke, cardiovascular disease and premature death The risk has aroused widespread concern around the world. At the same time, the results of the health economic evaluation published by Tian Maoyi’s team in “Circulation” at the beginning of this year further proved that the promotion of low sodium salt can achieve low cost and high returns. Cost of public health interventions to scale globally. However, some scholars believe that these studies are only carried out in my country, and it is not clear whether the significant protective effect on cardiovascular and cerebrovascular diseases is also applicable to other countries and other populations.

In this context, Professor Tian Maoyi and the team of Professor Bruce Neal from the George Institute for Global Health, University of New South Wales, Australia, conducted a targeted systematic review on the clinical effects of low sodium salts and meta-analyses. This meta-analysis summarizes 21 randomized controlled trials of low sodium salts conducted around the world, including Europe, the Western Pacific Region, the Americas, and Southeast Asia, as of August 2021, with a total of nearly 30,000 participants, and the duration of the low-sodium salt intervention. Ranging from 1 month to 5 years. The low-sodium salts used in the interventions ranged from 33% to 75% sodium chloride; potassium chloride from 25% to 65%.

Professor Tian Maoyi, the corresponding author of this paper, emphasized: from the existing research related to low-sodium salts, it can be seen that potassium chloride added to low-sodium salts does not bring additional risks; There is theoretical concern that excessive potassium intake may induce elevated serum potassium levels, but there is currently no conclusive evidence for this potential risk.

Experts commented that the above research results show that it is not accidental that low sodium salt can lower blood pressure. The findings further support the adoption of low sodium salt as a population intervention to reduce dietary sodium intake and increase dietary potassium intake in clinical practice and public health policy, thereby lowering blood pressure and preventing cardiovascular and cerebrovascular events.