This article is reproduced from [Xihai Metropolis Daily]; 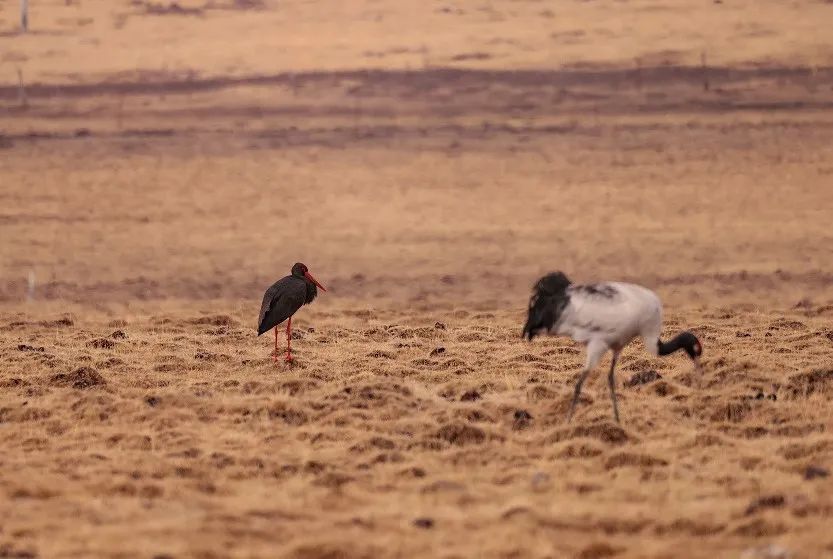 After observation, the single black stork that appeared this time traveled to and from the wetlands and woodlands in Menyuan Hui Autonomous County, Haibei Tibetan Autonomous Prefecture, and may have built nests and brooded there. It is worth mentioning that Zhou Yuanfeng also photographed the harmonious scene of black storks and black-necked cranes foraging together, the national first-class protected animals.

The staff of the Qilian Mountains National Park Administration said that the beautiful wetland environment in the Qilian Mountains National Park provides the necessary conditions for migrating birds to rest or breed while passing through the Qilian Mountains. The black stork is a large wading bird with a graceful physique, bright body color, agile movement and alert temperament. The adult bird is 1-1.2 meters long and weighs 2-3 kilograms; the beak is long and stout, the head, neck and feet are very long, and the beak and feet are red. The feathers on the body are all black except for the pure white chest and abdomen, which can change into many colors under different angles of light.

There are only more than 2,000 black storks in the world. They are known as “giant pandas among birds” and are currently included in the IUCN Red List of Threatened Species.

In recent years, the Qinghai area of ​​Qilian Mountains National Park has comprehensively protected and restored the ecosystem through the implementation of major ecological protection projects such as natural forest protection, wetland protection, closure of mountains for afforestation, and returning grazing land to grasslands, resulting in continuous improvement and improvement of wildlife habitats. The population of wild animals has increased substantially, and biodiversity conservation has achieved remarkable results.