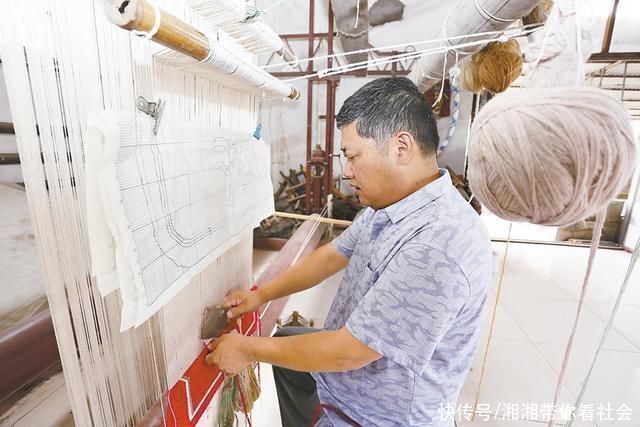 At the end of the Qing Dynasty, palace carpets entered the folk, and later became famous all over the world for their fine craftsmanship, beautiful styles and colorful patterns. One of the “Eight Absolutes”. 57 years ago, this production technique took root in Wen’an County.

Recently, the reporter walked into Huasheng Carpet Co., Ltd., located in Wucun, Sunshi Town, Wen’an County. The company The person in charge – Zhou Zihua, a member of the China Arts and Crafts Association, a master of arts and crafts in Hebei Province, and the fifth-generation inheritor of the palace carpet making skills of the provincial intangible cultural heritage project, is working with craftsmen to make palace carpets, foot mats, hanging ornaments, etc. busy scene. The criss-crossing warp and latitude lines of the palace carpet show the style of the palace and the beauty of rhythm.

The 55-year-old Zhou Zihua is introverted and not good at words, but when he talks about the palace blanket, there is light in his eyes. According to Zhou Zihua, his father, Zhou Zhenfang, once served as the director of a village-run carpet factory. In 1980, Zhou Zhenfang contracted the factory, moved the equipment into the house, and opened a family workshop. At that time, there were many palace carpet workshops in the vicinity, and there were more than 20 in the five villages alone.

Zhou Zihua accompanied his father to make palace blankets since he was a child. After graduating from middle school, he became a teacher with Zhao Fa, the fourth-generation inheritor of the craftsmanship of palace rugs, and studied the craft assiduously. After returning from his studies, Zhou Zihua took over the family business from his father. In 1999, he purchased land, changed the family workshop into a carpet factory, and expanded the scale of the enterprise. In 2007, Zhou Zihua restructured and established a carpet company.

The interlacing of warp and weft gives birth to “metrical poetry”

Palace carpets are relatively low-key among the “Yanjing Eight Wonders”, and they are most about royal etiquette. “The raw material of the palace carpet is high-quality wool or mulberry silk, which is handmade through weaving, flattening, sheeting, washing, casting, repairing and other processes. Many craftsmen can master one or two processes at most.” Zhou Zihua said that weaving is the key factor that determines the success or failure of palace carpets, and it is also the most time-consuming and labor-intensive.

Under the leadership of Zhou Zihua, the reporter came to the palace carpet production workshop. At this time, the empty workshop was very quiet, and only the “boom boom” sound of the craftsman’s fingers pulling the wool could be heard. In front of a handmade carpet weaving machine, the warp threads are densely arranged from top to bottom. The craftsmen must use the combination of different colors of weft threads and splay buttons to form complex patterns and form the palace carpet structure.

“More than 100,000 eight-character buttons are woven for one square meter of palace carpet, and a skilled craftsman works overtime. It takes more than 10 days to complete. After a long time, the eyes, hands and neck are very tired, and the older you get, the more you can’t bear it.” Zhou Zihua said, “The pattern of the palace carpet integrates painting, embroidery, brocade, and architectural decorative arts. The staggered layout presents an embracing, symmetrical, and centrally organized aesthetic. I love the craft, and every time I finish a piece, I feel a sense of accomplishment.”

The palace carpets are well-made and have high historical, cultural, artistic and social value. “In the past, most of my country’s palace carpets were exported, and the business was very good. In the 1980s, the palace carpet industry entered its heyday.” Zhou Zihua said, at that time, he and the craftsmen “shop” the palace carpets into the People’s Congress Church, Diaoyutai State Guest House, National Grand Theater and other places. Nowadays, with the emergence of machine-woven carpets, hand-made palace carpets have been greatly affected. Several original palace carpet factories in Sunshi Town have closed down one after another, and a large number of craftsmen have been lost. Zhou Zihua gritted his teeth and persevered, and his company became a local The last reserve of palace carpet making skills is faced with the two problems of survival and inheritance.

Faced with the predicament, Zhou Zihua sticks to the traditional palace carpet style on the one hand, and combines traditional culture with modern aesthetics on the other hand. Combined, custom palace rugs according to customer needs. He also tried to promote products through WeChat and short video platforms. Under the leadership of Zhou Zihua, his son and daughter also became palace carpet craftsmen and embarked on the road of inheritance.

“A craftsman must do his best to complete a task, not to be rudimentary, but to keep pace with the times.” In Zhou Zi In Hua’s view, the palace carpet is not only a craft, but also contains profound cultural heritage, and he strives to bring this intangible cultural heritage to life.

Disclaimer: This article is reproduced as For the purpose of passing on more information. If the source is incorrectly marked or infringes your legal rights, please contact the author with the ownership certificate, we will correct or delete it in time, thank you. Email address: [email protected]