CCTV news: In addition to traditional fruits and vegetables, beautiful flowers are also ushering in the harvest season. During this time, more than 20,000 mu of marigolds bloomed in Tengchong City, Yunnan Province. The continuous sea of ​​flowers not only decorates the beautiful countryside, but also opens up more channels for flower farmers to increase their income.

Headquarters reporter Li Tengfei: This is the marigold daisy chain in Phoenix Community, Mingguang Town, Tengchong City It is a planting base, and the marigolds that cover half of the hillside are very eye-catching in the green package. Seeing the stamens blooming in layers, some big palms couldn’t hold them. The breeze blew and swayed gently, forming a different kind of scenery. Villages have become gardens, roads have become flower belts, and fields have become seas of flowers, adding new scenery to the beautiful countryside. In fact, there is a special feeling at the scene that what the camera can’t show is the fragrance of flowers. We are not only immersed in the sea of ​​flowers, but also surrounded by the fragrance of flowers, surrounded by rich fragrance. 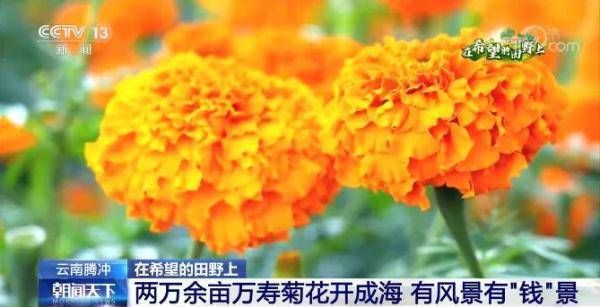 The flowering period of marigold is mainly from July to September, which is also the busiest season for flower farmers. The villagers came to the fields early in the morning, bowed left and right, skillfully picked flowers, and quickly filled a basket. This process not only pays attention to speed, but also requires high quality, and it is necessary to preserve the integrity of the flower buds as much as possible.

After the early stage of raising seedlings, transplanting, cultivating soil, and managing and protecting, it is finally time to harvest. Marigolds bloom one after another, and the flowers bloom in one season, and many can be picked seven or eight. Therefore, during this time, the villagers have been busy.

Marigold is a common landscaping flower, which is very suitable for horticultural decoration. However, Tengchong marigold is more used as a medicinal herb for clearing away heat and detoxifying. In the past, such farmland sloping land was generally used for planting potatoes, sunflowers, etc., and the economic benefits were not high. Now the continuous large-scale planting of marigold has increased the agricultural output value and has become a characteristic industry that helps farmers increase their income. In addition to the rent from land transfer, working at the planting base can also earn an income.

This year, more than 24,000 mu of marigolds have been planted in Tengchong, covering 12 towns (streets), becoming an important industry for local people to increase their income and become rich.