Watermelon rind is the best side dish. It clears fire, removes evil and detoxifies. It goes well with porridge, delicious and healthy. 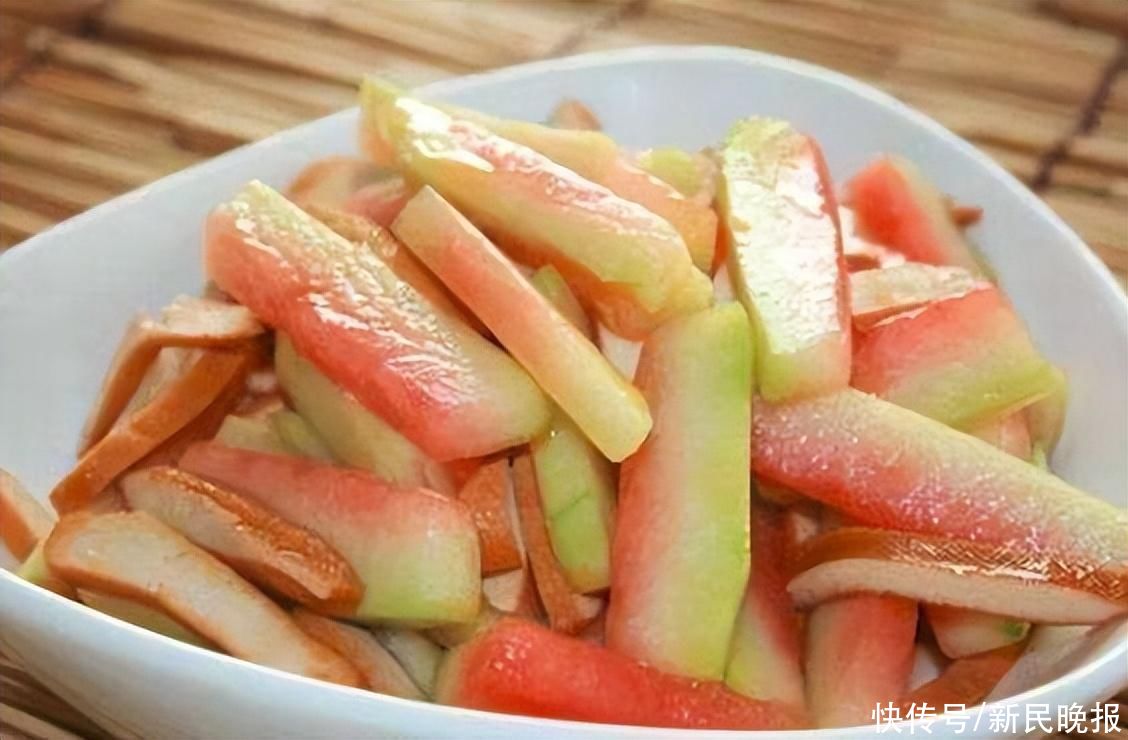 , when my wife and I were discussing what to eat tomorrow, we would invariably put forward: “Tomorrow, let’s make a pot of porridge, and get some good porridge and side dishes, which is the most suitable diet for the elderly in summer.” Fortunately, the way of cooking is now easier and simpler Now, if you want to drink porridge tomorrow morning, you can make an appointment in the rice cooker the next day, and get up the next morning, and a pot of fragrant and sticky good porridge will be brought in front of you.

Let’s say that eating porridge now is fundamentally different from eating porridge before. Now eating porridge is to adjust the taste and reduce the intake of fat and greasy, which is an active healthy diet; in the past, eating porridge was to save food, and porridge was used instead of rice. I remember my father laughing at himself when he was eating porridge: “Thin porridge is thin and hard to the belly.” Yes, it is like a paste, how can it not harden the belly after a long time? Furthermore, the porridge dishes that used to be eaten in the past were nothing more than pickles, either a spread of pickled carrots or a spread of pickled lettuce slices with skins, and three cents was enough for a whole family. The father is humorous, calling the pickled radish strips “ginseng strips”, the fermented bean curd with sauce as “sauce meat”, the pickled melon as “duck head and neck”, and the pickled watermelon rind as “Tsing Yi” or “Cui”. Clothes”. Looking back now, “Cuiyi” seems to be more colorful and moving.

In the summer, it is time to eat watermelon. At that time, every household ate watermelon. Watermelon was cheap and high-quality. It was the best product to cool off the summer heat. At this moment, in a water lane city like Suzhou, the melon boats are like crucian carp crossing the river one after another, shouting “Hebanglang, you want to buy watermelons-” floating on the water, knocking open The doors and windows of the pillow river family. That’s when the melon farmers in the suburban county came to the city to bring coolness. They send cool goods and earn hot money. Urban residents will not be stingy with these hot money, so they scramble to open doors and windows along the river, call the boat to Houheyan, inspect the goods, and negotiate the price. The deal was made, so the melon farmers carried the watermelons in the cabin along the stone steps to the shore, and stored them in the corner of the main house. Usually, the melon farmers will knock open a melon on the spot in advance to “verify the identity”. These don’t matter to melon farmers, and it is common for buyers to get cheaper on the scales. Anyway, they are grown by themselves.

Every family eats watermelon to cool off the heat. In addition to the gravy, the by-products melon seeds and melon rinds, watermelons are also favored by housewives. The melon seeds are washed, dried and fried, and the melon rind is processed and pickled. It is the best porridge side dish in summer. The housewives are skilled in handling the melon rind. They dig out the outer and inner layers of the melon rind to make it fresh, leaving only a thin layer. Then cut into strips and marinate. It can be eaten in a moment. It is best to pour soy sauce and sesame oil, add a little sugar and Monosodium glutamate, just mix it up, and serve it on the table like jade, it looks delightful, and it is refreshing to eat, especially when it is used to sip porridge. If you use this pickled melon rind with other ingredients to fry it, it is also very satisfying, usually fried edamame with melon rind, fried louver with melon rind, and fried shredded pork with melon rind. tasty. My father likes stir-frying melon skins into the food, describing it as a fairy in Cuiyi, saying that “a fairy in Cuiyi goes down to the clouds and brings coolness to the world.” The old grandmother also said: “Watermelon rind is the best side dish. It clears fire, removes evil and detoxifies. It is the best food given to common people by God. Don’t waste it.” As expected, those summer days when watermelon rind is eaten are indeed peaceful. Comfortable, not even a prickly heat.

Watermelon rind sipping porridge was a standard for ordinary people in that era, but it is rarely seen now. Now sipping porridge and side dishes are really colorful, smoked fish, fried shrimp, meat, loose skin, egg, milk melon …I feel like I’m missing something when I’m eating, but after thinking about it, I realize that I’m missing a few pieces of watermelon rind. The simple and refreshing “one piece of green clothes and half a bowl of porridge” in the past is also worthy of nostalgia. Yes. (Wu Yimin)