It was my emergency class that day, and several family members pushed a patient to my clinic.

The family is very anxious: “Doctor, please show us quickly, the stone has caused severe back pain.”

I walked up to the patient, who was in pain lying on the flat cart.

“Have you ever had a ureteral stone before?” I asked him.

“Well, yes, I still have the test results from two days ago.” The family members said and quickly took out a CT report.

“Where are you hurting now?” I asked while examining the body.

“The right side, here, and here.” The patient replied, pointing to the lower back on the right side.

“What kind of pain? Is it twisting or pulling?” I continued to ask.

“It seems like it hurts from tearing, and I can’t tell. It’s just the stone. Please give me a painkiller.”< /span>

“Do you hold your breath?”

“Don’t hold your breath, It just hurts.” The patient replied in pain.

The family members are also urging me to give the patient pain relief.

The patient had a right ureteral stone in the past, and the abdominal CT a few days ago showed that there was indeed a right ureteral stone, and this time it was the right ureter. When it comes to lower back pain, it is true that the first consideration is that there is a high possibility of pain caused by stones, but I just feel that something is wrong. It may be a doctor’s intuition, and I can’t express that feeling.

“Where does it hurt, please point again.”

< span>The patient’s family was a little unhappy, and felt that I should give the patient pain relief first.

The patient pointed again, and I found that his pain was between the top of the kidney area and the lower corner of the scapula, and I was very On his physical examination, percussion pain in the renal region was not obvious.

“Do you feel nauseated?”

“Do you feel like you always want to poop?”

“Is there any stretch in the testicle?”

“No.” The patient answered me, and the family members became impatient again.

“Let’s do an electrocardiogram first, I don’t think the pain is caused by the stone, so let’s rule out the heart problem first.” I’m very polite I explained, I know that at this time my family members will not understand my approach.

After a brief explanation, I took the patient to the emergency room. The patient’s blood pressure was normal on both sides, but the electrocardiogram showed: T wave inverted, which indicates myocardial ischemia.

So I took this patient to the emergency room Doctor, and went back to my office to see other patients.

About 2 hours later, the emergency room called me to tell me about the patient just now.

“Awesome, why do you think the patient has a heart problem just by looking at it? It’s really amazing, you will come when you have time Look at his test results.”

“Is it a dissection?” I asked.

As soon as the blood results came out, physicians took it seriously, because the second-mer value was 200 times higher than normal: 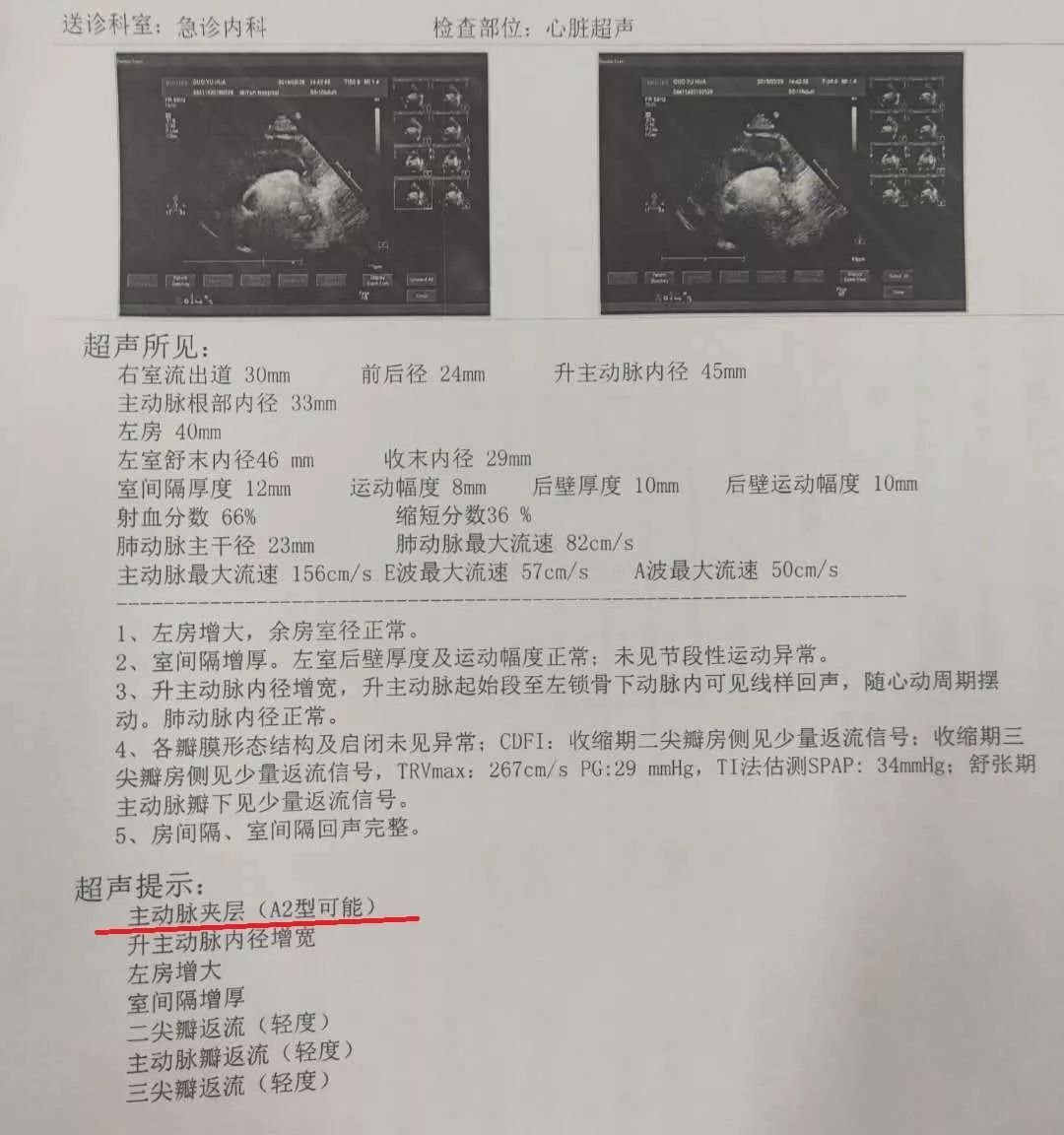 Further treatment of patients later . After listening to the internist’s description, I felt a lot of cold sweats suddenly broke out on my back, and I was afraid: If my first judgment was wrong at the time, and I mistook the patient’s pain this time for ureteral stones, then the consequences would be very serious. Incredible.

The doctor in the emergency room later asked me whyThen I denied that the patient was the pain caused by stones.

My answer: The feeling is the feeling, the feeling of the emergency doctor for many years. The location and nature of the patient’s pain made me feel uneasy and sent a danger signal from within, that’s how an ER doctor feels.

Early diagnosis and treatment of aortic dissection is very necessary. Once the dissection ruptures and hemorrhages, it can basically be declared dead.

Hypertension and arteriosclerosis are the main causes of aortic dissection: 70% of aortic dissections are caused by hypertensive atherosclerosis ~80%, high blood pressure can make the arterial wall in a state of emergency for a long time, and cystic degeneration or necrosis of elastic fibers often occurs, resulting in the formation of dissection. 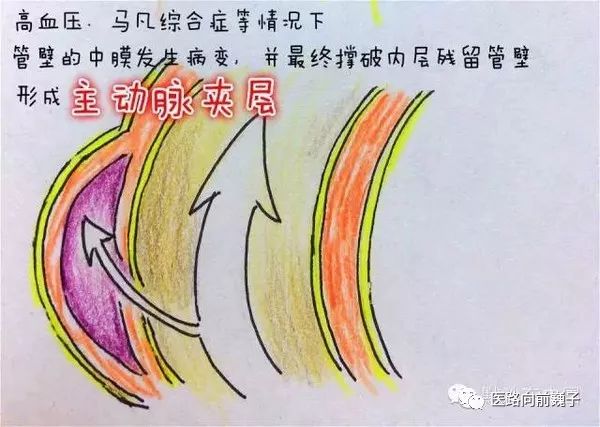 The clinical manifestations of aortic dissection in most patients are: Chest and back pain, severe and unbearable pain, peaked after the onset, showing a knife cut or tear-like appearance, and blood pressure on both sides. 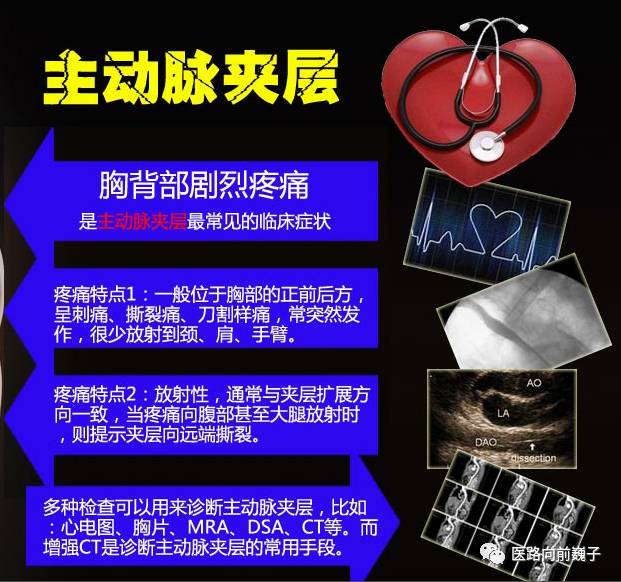 Chest pain is often considered as acute myocardial infarction, but myocardial infarction When the chest pain is not very severe at first, it gradually worsens, or it is relieved and then worsened. It does not radiate below the chest, with characteristic changes in the electrocardiogram. If there is a shock appearance, the blood pressure is often low, and it does not cause unequal pulses on both sides.

To prevent aortic dissection, regulating blood pressure is the key. If you have the above symptoms, you should avoid activities and exertion, and call the emergency number immediately.

The patient is lucky, Although he and his family did not understand at first , but finally believed the doctor and went to the operating table without breaking the dissection. But the case I’m about to talk about next is a tragedy.

I had seen another male patient who was very thin. He was pushed into the emergency room by his wife in a wheelchair. The old man complained of holding his breath and had a history of pneumothorax.

For the symptoms of suffocation and chest pain, I suggest that the patient first rule out heart problems, but the two elderly people refused and insisted on signing to take a chest X-ray. How much is this pneumothorax? I tried hard to persuade, but they insisted on taking a chest X-ray.

The results of the chest X-ray showed no pneumothorax, and the couple was leaving. The nurses and I both persuaded the old man to check his heart again, even if he did an electrocardiogram first. After 10 minutes of explanation and persuasion, the two old people insisted on going home for observation.

“If we don’t investigate, don’t tell the doctor. Can I sign it? It doesn’t matter what happens to you.” The old man said stubbornly.

“It’s not a question of whether to sign or not, we are afraid that your suffocation this time has something to do with your heart, it is for your own good, let’s do it , you can rest assured…”. Really, I was really begging him at the time.

But in the end, the old man signed and left.

An hour later, the old man was sent to the emergency room again by the 120 ambulance, but he was no longer breathing…

Two cases, one life and one death, the lesson is profound! I would like to say that if there is suffocation, chest pain (especially if the pain is crushing), the pain may radiate to the lower back, shoulder, and the pain is accompanied by profuse sweating or occasionally nausea , Toothache, even if there is no history of heart disease, you should attach great importance to go to the hospital for emergency treatment. And please be sure to pay attention to the doctor’s advice and treatment. At the same time, I also want to say, Please also ask your doctor and friends to do a serious physical examination and ask your medical history carefully. Because patients themselves do not understand the disease, our doctors should be patient to explain. Because of the patient’s fear of disease, we should put ourselves in more warmth and care. (source:Yilu Qianxiangweizi)

< p>Please forward this article to all to see 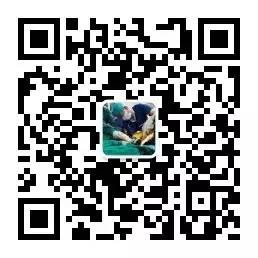 I also want to remind everyone: There are often friends who leave messages for consultation, and the top three specially opened the “Top three school” to answer questions. Please click on the business card below to follow, and protect you and your family’s healthhealthescort.