This article is reprinted from [Qianjiang Evening News];

As it approaches midnight, the Daomao Lane, which is full of life in old Hangzhou during the day, has become neither hot nor lively just like the summer heat. Pedestrians or vehicles occasionally pass by.

At 11 p.m. on August 8th, the gate of No. 60 Dao Mao Alley opened. The grandfather of figs, Wang Kunsen, went out to scavenge waste at night like every day for the past ten years.

This spring, an hourly journalist once looked for Grandpa Wang at night, and then he listened to the opposite of their house. Feng Zi, the owner of the seafood shop, said, “Grandpa sometimes doesn’t go out until one in the morning.”

Feng Zi said that Grandpa Wang is in good health and still scavenging every night.

It’s been a few months again, is Grandpa Wang okay? 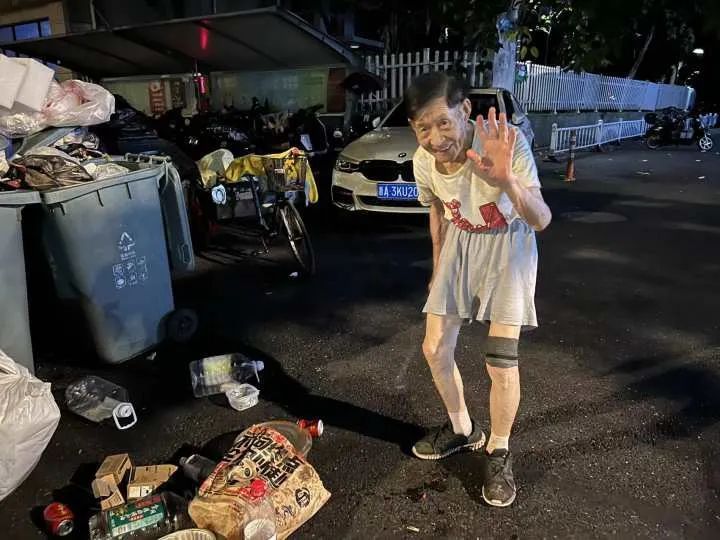 This summer night, the hourly news reporter found that under the moonlight, in the light shadow, Grandpa Wang’s back seemed to be more and more curved Yes, it looks a lot thinner.

The figs are ripe

The body is still strong

Although the weather has not cooled down yet, the beginning of autumn has passed. At the transition of summer and autumn, crops mature and the harvest season begins.

Outside the window of Grandpa Wang’s house, four fig trees are already full of heavy fruits. 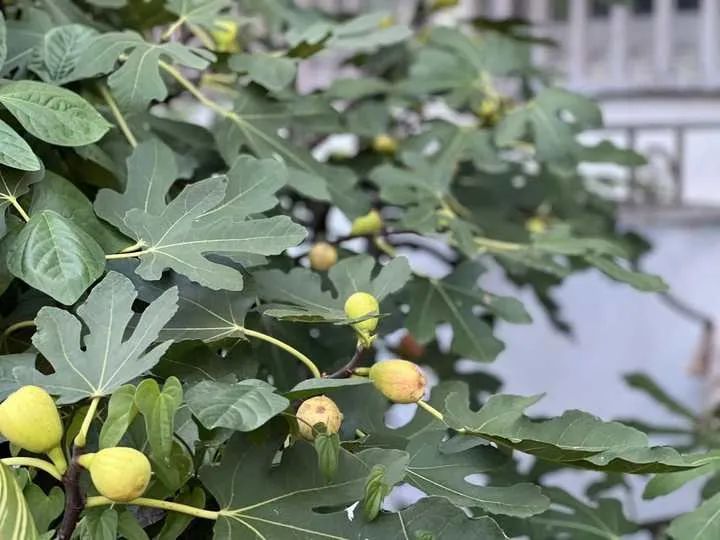 The figs are ripe for another year.

In the summer of 2019, Grandpa Wang once hung a sign on the fig tree: “The figs grown for children, please don’t pick them privately”, and the sign was “An old man who loves children.” “.

After three searches, the reporter gradually understood the story of Grandpa Wang’s late-night scavenging to help students, and The “Zhongtian·Qianbao” student aid action has a great origin.

Since July 18, 2012, I have been rummaging through the trash cans in front of my house, collecting newspapers, plastic bottles, and cans, selling them for money, and saving for those family conditions Not so good kids do tuition.

This year, figs are not too sweet, but Grandpa Wang is very sweet.

The last student he sponsored, has graduated. The girl who was the first to be funded found a good job, got married and had children. She continued the goodwill of Grandpa Wang and helped some students in her hometown.

Speaking of figs, Grandpa Wang felt a little distressed, “It’s hot, it doesn’t grow well, and it’s not sweet.” Grandpa Wang said, “I picked it once the day before yesterday, about twenty or thirty, It has been given to the children.”

Grandpa Wang said that the weather is so hot this year that the figs are not as tasty as in previous years, “My figs are also called honey fruit, July 20th. It started to ripen one after another.”

He said that the figs can be picked until the end of August, “If the weather cools down for a while, it should be a little sweeter, and I will call you and come over to eat.

The figs from Grandpa Wang’s house, which the reporter has eaten several times, are really sweet. 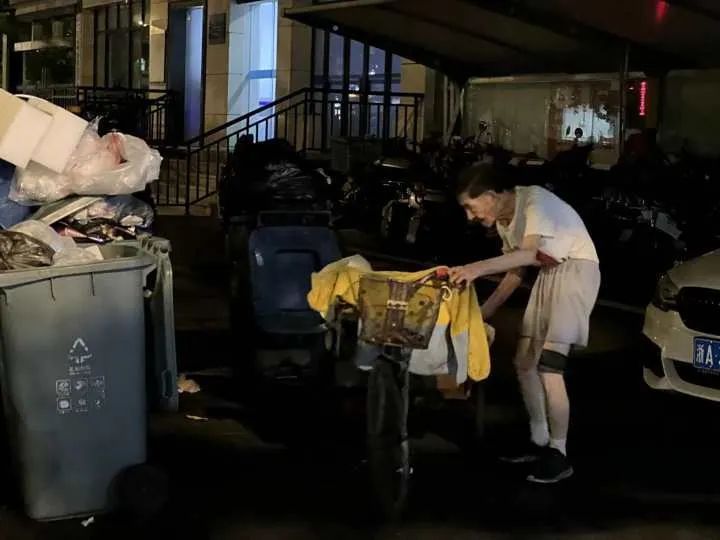 When I first met, I would call him from time to time to chat; this year, he has been unable to hear the phone calls.

“I could hear it last year, but this year my ears are not good.” Grandpa Wang pointed to his right ear.

Squatting with him beside the trash can, we need to speak very loudly in his right ear, accompanied by the peculiar smell coming from the trash, we talk like this.

There were also people who came back late riding electric bikes passing by, no one gave any strange eyes, they all lived in the nearby neighborhoods, and during the more than 3,600 nights when Grandpa Wang was scavenging, he seemed to be surprised by this scene. got used to it. 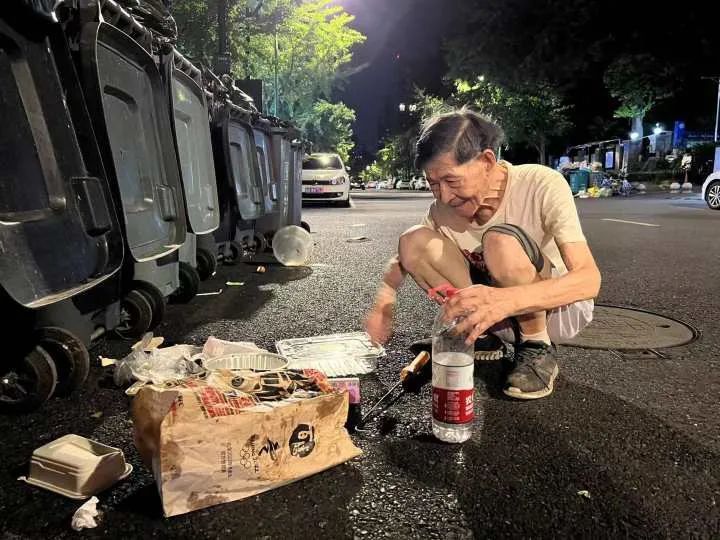 The car passed by, In the flickering light and shadow, you can see Grandpa Wang’s aging face and clearly articulated hands.

He is ninety years old.

Remember what Fengzi said, In winter, my grandfather fell, because his back was too hunched and he was too old to get up all at once. It was people nearby who saw it. Grandpa helped him up, a little distressed.

“I’ve been out every night for more than ten years.” Watching Grandpa Wang tell the story with a smile, he regards scavenging as his responsibility and life, and he admires it a little.

Over the yearshe has been absent twice, once when his brother died and didn’t come out for one night, and In 2020, the heart is not easy to have surgery.

“The heart was replaced with an artificial membrane.” Grandpa Wang said that the operation would require general anesthesia, and the family was worried, “I’m getting old, my wife and son are worried about me waking up But come on, I didn’t dare to sign at the beginning, I said it doesn’t matter.”

In that operation, Grandpa Wang entered the operating room at 3 pm, started the operation at 3:30, and woke up at 7 pm Come over, “I found that breathing and eating are the same, I feel very good.” After resting for about ten days, he was discharged home on May 11. 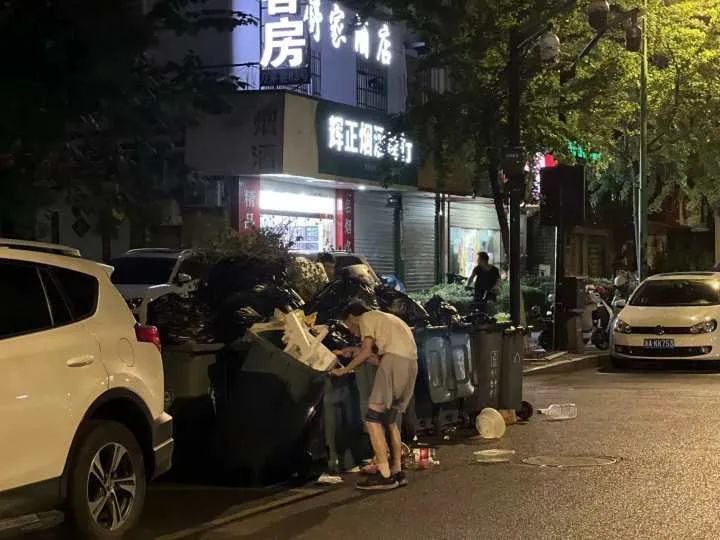 On May 12, Grandpa Wang continued his “scavenging business”. sky.

After the operation, Grandma Wang Xiuyun would remind Grandpa Wang more when he went out, and sometimes accompanied him.

But this year, he sometimes “tosses” until 4am.

Because he still feels that he is not for living, he can sleep during the day and can’t affect those who make a living.

Excluding these 20 days, Grandpa Wang happened to be on the tenth anniversary of scavenging. 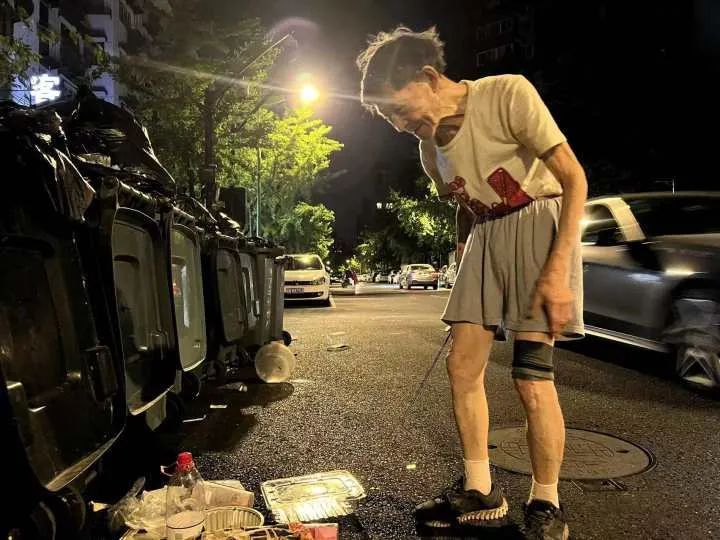 The moon is like a bow, so is Grandpa Wang’s back

Still holding a small hook and digging out some things that can be used to sell money.

“Look, it’s quite a lot.” Several trash cans were turned over, plastic basins, mineral water buckets, etc. were collected by Grandpa Wang, and then loaded onto a tricycle.

Every time I ask my grandfather, how long do you plan to go on scavenging in the middle of the night?

“As long as I can move, I want to continue.” He said he was very happy to be able to help others. 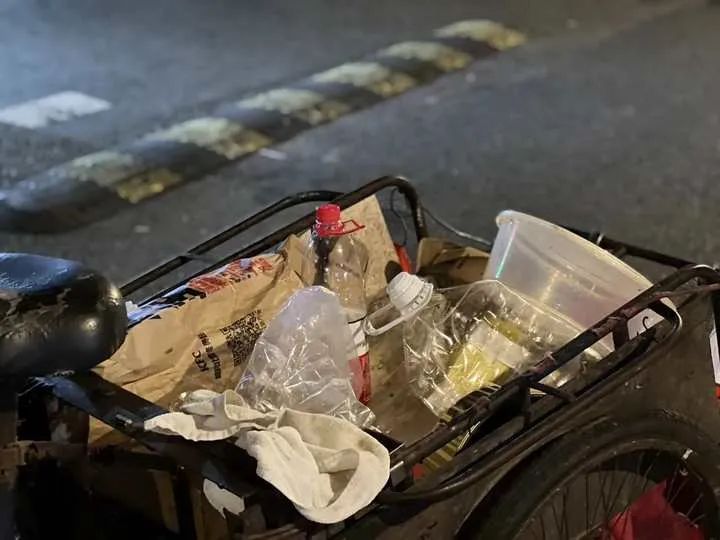 He said “this road is not lonely”, yes Many people remember him.

This time, Grandpa Wang said, “I asked the doctor after the operation how long I could live, and the doctor said, there are ten years left. Look, it’s been two years now. Look, there are still eight years.” In the darkness, the old man said with a smile. 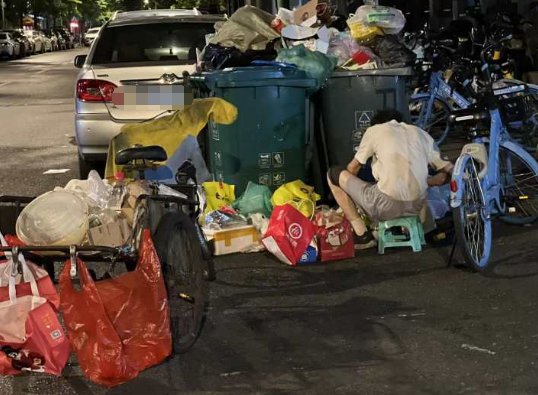 When parting, Under the street light, Grandpa Wang sat on a small plastic bench, still serious and serious. Pick it up skillfully.