This article is transferred from [Sino-Singapore Jingwei];

Sino-Singapore Jingwei August 5th (Wang Yongle) Good news! The fuel surcharge has finally been lowered after the “five consecutive increases”. Starting today (5th), you can save up to 60 yuan on air tickets. 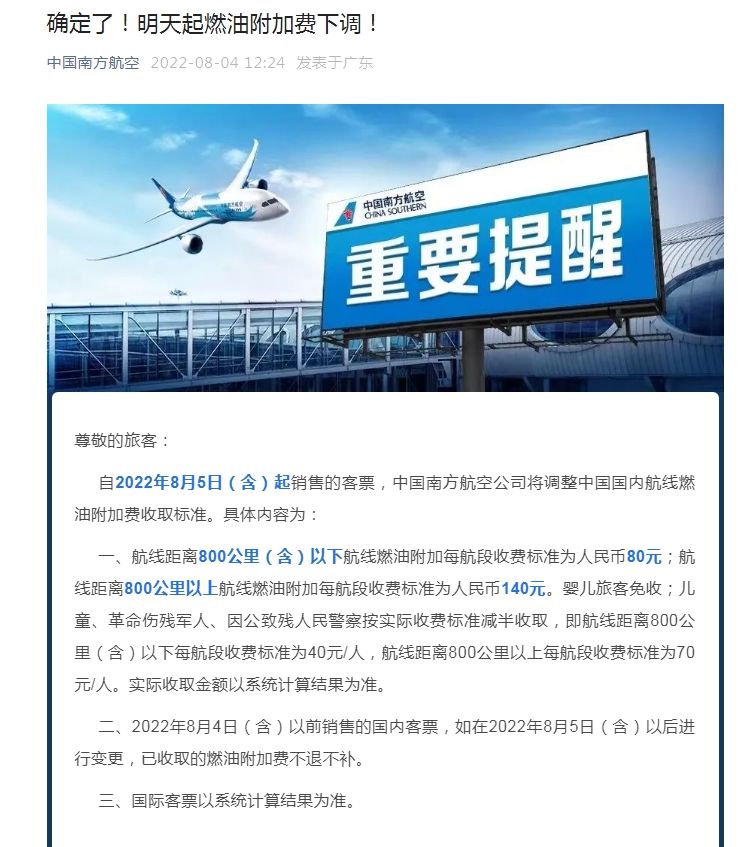 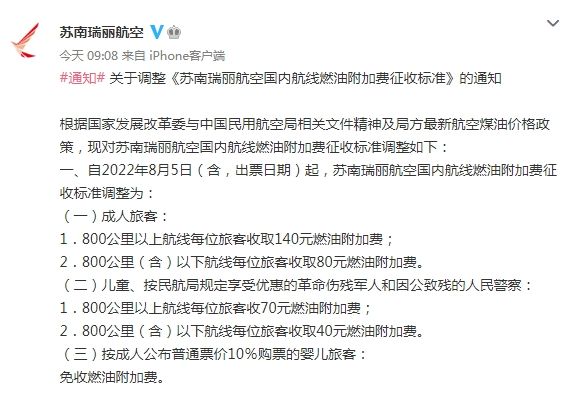 From the notice of airlines, this fuel surcharge reduction is based on the spirit of the relevant documents of the National Development and Reform Commission and the Civil Aviation Administration of China. Fang’s latest aviation kerosene price policy adjustment.

On July 29, Longzhong Information once issued a document saying that the international oil price is in a downward trend, and the price of jet fuel has been lowered as a whole.

Sino-Singapore Jingwei noted that this is the first time the fuel surcharge has been lowered since the resumption of collection in February this year, and it has been raised five times before.

From the perspective of the adjustment standard, after the fuel surcharge is lowered, passengers can save up to 60 yuan by buying a ticket after August 5, compared to before the reduction.

The airline companies had a very difficult life in the first half of the year. As of press time, a number of airlines have released performance forecasts for the first half of the year, all of which are in a state of loss. Judging from the upper limit of net profit, Air China, China Eastern Airlines, ST Hainan Airlines, and China Southern Airlines all have pre-losses of over 10 billion yuan, and the four companies have a total pre-loss of 57.65 billion yuan, exceeding the 36.238 billion yuan loss in 2021.

As for the reasons for the loss, China Southern Airlines pointed out that the domestic civil aviation industry has been affected by multiple shocks such as repeated epidemics, high oil prices, and the devaluation of the RMB.

China Eastern said that the company, headquartered in Shanghai, has experienced severe challenges from the impact of the epidemic. At the same time, the sharp rise in international oil prices and the depreciation of the RMB against the US dollar have further aggravated the company’s cost pressure.

Air China also stated that since the beginning of this year, the domestic epidemic has spread in many places, resulting in a significant reduction in domestic routes investment; international routes investment continues to be limited. Rising oil prices and exchange rate fluctuations further aggravated the difficulty of improving the company’s efficiency, and the operating performance of investment companies related to the main business was also affected.

And ST Hainan Airlines said that the company’s loss was mainly due to operating losses and financial exchange losses.

Will the fuel surcharge cut stimulate travel and boost airline performance? Cheng Chaogong said that the decline of fuel surcharges can reduce the travel cost of civil aviation passengers to a certain extent, and has a certain stimulating effect on the demand for non-public travel such as tourism and vacation.

“Fuel costs account for 30% to 40% of the total cost of airlines, and the continuous rise in aviation kerosene prices has brought greater pressure to airline operations. Therefore, the decline in oil prices will To a certain extent, it will alleviate the cost pressure of airlines, which will have a certain positive effect on the improvement of performance fundamentals.” Cheng Chaogong further analyzed.

In addition, Huatai Securities recently released a report saying that the epidemic situation is improving marginally, the overall epidemic prevention policy is on the trend of relaxation, aviation demand is expected to continue to recover due to the peak season of summer transportation, and the probability of greater pressure on oil prices and foreign exchange is relatively high. Small, airline profits are expected to improve. (Sino-Singapore Jingwei APP)