Between Wangjing Street and New World Department Store, a closed green space has recently been transformed into a beautiful small park – Fu Garden. Citizens can roam comfortably among shopping malls and office buildings. 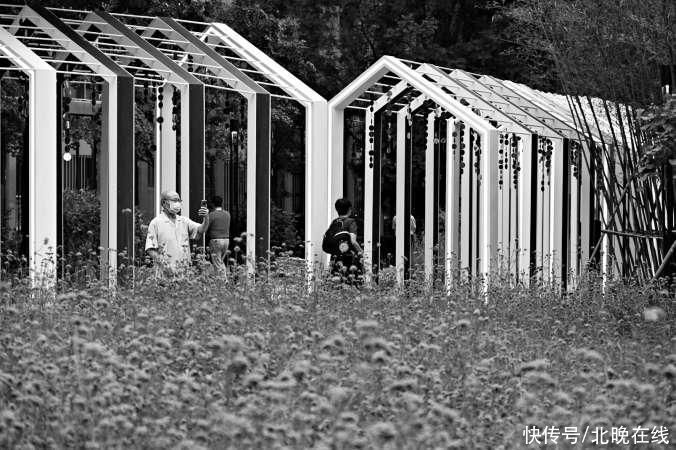 Fu Garden is located at the southwest end of Wangjing Street, surrounded by International Bamboo and Rattan Building, Baoneng Center, Jiamei Fashion Center, and New World Department Store. The small park is like a mosaic A piece of emerald between tall buildings. This is an open park, and the surrounding residents and white-collar workers can come here with confidence. The gate area is a white modern-style fountain with a water curtain dripping down, forming words such as “Fuyuan” and “Wangjing” in a while, and five-star patterns in a while. The garden was lush with greenery, echinacea, sage and hydrangea.

How come a park suddenly pops up in a land where every inch of land is so precious? This was originally a green space for the International Bamboo and Rattan Building. For many years, it was surrounded by fences and brick walls. Some trees and grass were planted in it, but they could not be seen or entered. Two years ago, Wangjing Street opened, and citizens and corporate employees have increased demands on the regional environment. After negotiating with Bamboo and Rattan Building, Wangjing Street decided to “open the wall and turn green”, and the alley that was originally only used as a freight channel has also been upgraded to a new one. Accessible trails.

The park is only about 10,000 square meters, a small area, but there are 6 small scenes, which are quite poetic and tender. The name of the mountain-shaped fountain is “Shanfu Shuifeng”, and the lush bamboo forest is called “Green Bamboo Aoxue”. In the future, Wangjing will also connect the commercial entities in its jurisdiction through slow-moving system reconstruction, greenway construction, and smart transportation projects, forming a circular dynamic consumption circle. Photo by Cheng Gong