CCTV News: Continue to pay attention to the Asian elephants who have returned home for a year after “returning from the north to the south” last year. These days, as corn, fruits, etc. have successively entered the maturity period, Asian elephants living in Yunnan have also ushered in the most delicious time of the year. In Yunnan Pu’er, Xishuangbanna and other places, the “Elephant Canteen” specially opened for Asian elephants opened.

This is the life rhythm of the elephants in the “Elephant Cafeteria” – eating and playing, swimming when tired, and eating when hungry. From the footage taken by the drone, we can see that after the beginning of autumn, the Pu’er River in Yunnan is soothing, the mountains and forests are stacked, and it is green. The corn and plantains growing in the farmland, as well as the palm leaf reeds and elephant grasses on both sides of the road are the food that elephants like. Although they belong to different families, they often “gather” and “eat” here because of the delicious food. 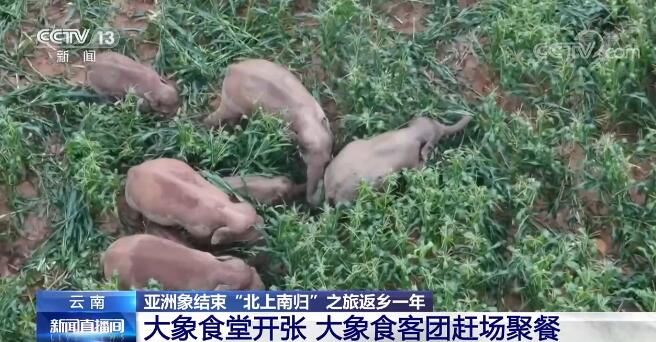 CCTV reporter Jiang Shulin: Chasing elephants in the vast mountains is a physical task. With the help of the Asian elephant monitoring system established locally, we found the monitor in this area, and now we immediately follow monitor Lao Bai to the mountain Chase the elephant.

Check carefully along the way, there are traces of elephants passing by everywhere, huge footprints, fallen crops and fruit trees, eaten corn cobs can be seen almost everywhere. Near noon, the reporter climbed over the mountains and finally saw the elephant with his own eyes. 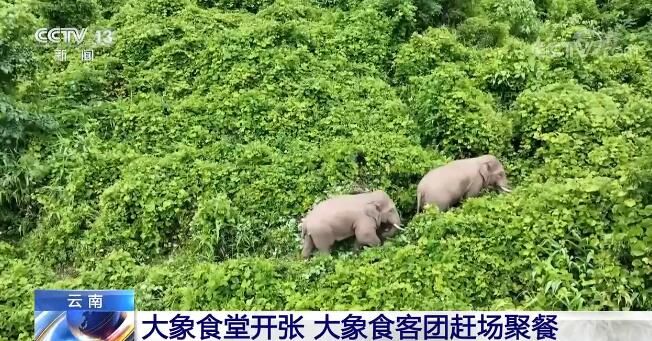 Asian Elephant Monitor Bai Xiao: It’s like this is its world. It comes out to eat at 3 or 4 in the afternoon, and eats whenever it wants. It doesn’t enter the woods until 11 or 2 in the morning. 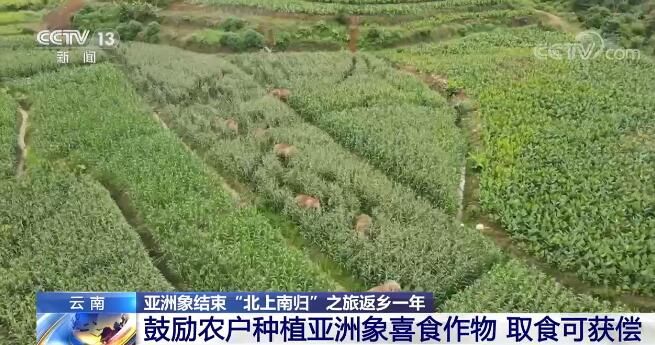 Ma Bin, Director of Forestry Center of Yixiang Town, Simao District, Pu’er City, Yunnan Province: The people planted 670 mu of corn here, and also interplanted some plantains on the slope. Elephants can eat here, there is a distance from the stockade, and the safety of the people is also guaranteed.

Zhou Zhitao, Chief of Wildlife Conservation and Wetland Management Section, Forest and Grass Bureau, Pu’er City, Yunnan Province: In 2022, Pu’er City will add 7,000 mu of Asian elephant food source bases, mainly in Simao District, Lanzhou, where Asian elephants are active. In Cang County and Jiangcheng County, it is mainly arranged in the main passages and areas of elephant activity, which can meet the needs of Asian elephants to feed in the wild, reduce the probability of entering the village and the household and damaging crops, ease the contradiction between human and elephant, and promote the development of human elephants. harmonious.

Last year, during the Asian elephant’s return trip from the north to the south, the scene of the wild elephant’s self-made “straw hat” to prevent heatstroke and cool down made people laugh. These days, the baby elephants who “dine” in the “elephant cafeteria” are also unlearned, play with the muddy grass with their trunks, and once again dress themselves up as “straw hat elephants”.

This is an interesting scene captured by a reporter with a drone in the summer of 2021. During the journey, Asian elephants tried their best to cool down in the summer. They would throw soil at each other, and their noses were the best way to spread soil artifact. One of the adult elephants threw the soil and grass onto himself and his head when he threw the soil, as if he had made a straw hat for himself. What’s particularly interesting is that this “straw hat” has never been taken off, which is quite interesting. 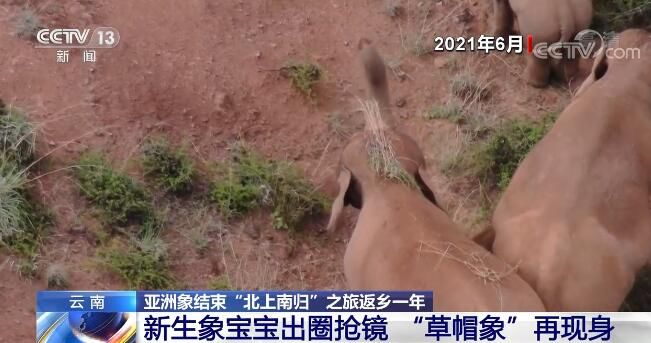 The fun scene continues this year. In the “Elephant Cafeteria” in Pu’er River City, while other family members were enjoying the corn meal, this new-born baby elephant started a self-healing mode. He picked up the soil, threw it on his back, and threw the grass on his back for a while. He didn’t succeed the first time, so don’t be discouraged. After three or four times, the elephant baby has dressed up as a “straw hat elephant”. The little guy “After Skin Removal” did not forget to show the elephant on-site and all kinds of cuteness. 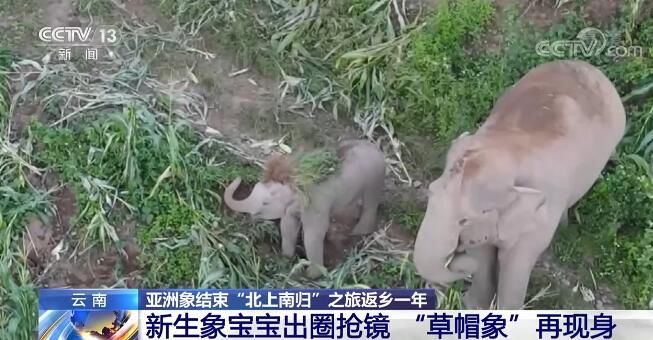 Shen Qingzhong, senior engineer of Xishuangbanna National Nature Reserve Management Bureau: Elephant herds, especially female elephants, are very strict in their protection. Generally, the distance between activities is not too far, and they will be taken away in about a week. Go farther and even go into the water, teach it some life skills, the little elephant has a very strong ability to imitate, just like our children.

As the largest animal on land, elephants are large and well-developed. So, how do two elephants who adore each other show their affection together? Immediately through the reporter’s live lens to find out.

Through the camera, we can see that the elephants in love have changed their calmness and are dancing and interacting.

This is the “Fast Three” Dance of Elephants. The rhythm is lively and the dancers are enthusiastic. Elephants are in love with each other at the beginning, so they follow suit at this time, chasing after them fiercely. 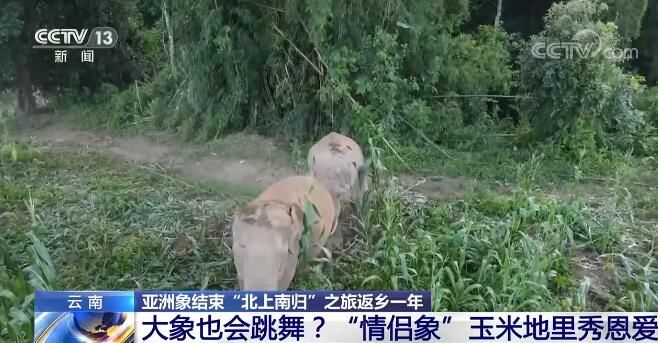 This is the “Slow Four” dance of elephants, the rhythm is slow, and the dancers are graceful. Because the elephants know each other’s love, they seem to be affectionate, you and me. 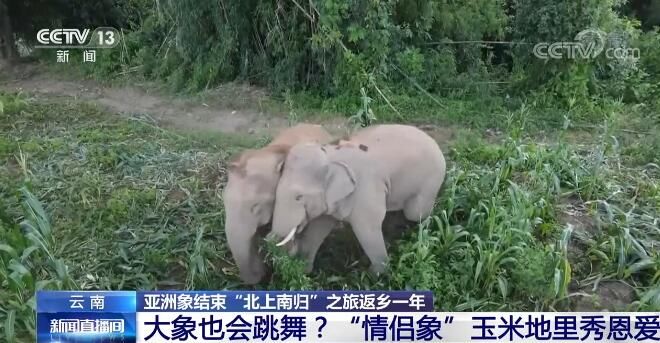 This is the Elephant Trunk Dance. The male elephants use their long trunks to play the rhythm and greet their favorite people to eat and have fun.

This is an elephant-ear dance, two elephants, rubbing their ears, whispering, and it seems that there is too much to say and not enough to hear.

Zhou Zhitao, Chief of Wildlife Conservation and Wetland Management Section of Pu’er Forestry and Grass Bureau: Our monitoring data shows that now Asian elephants can eat some refined grains, such as corn, sugarcane, etc., and it takes a long time to eat Shortened, the pregnancy cycle will be shortened accordingly. We found that a baby elephant can be born at about 18 months, which means that the fertility rate has increased.