Will the new virus be transmitted from person to person, or will it become a pandemic ?

Source: YimaitongAuthor: YunfeiThis article is authored by the author to publish it, please do not reprint without authorization.

The article says that a new animal-derived pathogen that can infect humans has been discovered in Shandong and Henan, China Henipavirus. The authors named it Langya virus (Langya henipavirus, LayV).

What is “Langya virus”?

In 1994, Hendra virus caused equine and human infection in Australia.

In 1998-1999, the first Nipah virus infections in pigs and humans occurred in Malaysia and Singapore.

The study shows that the newly discovered LayV genome consists of 18402 nucleotides, and the genome structure is similar to other Henipavirus is the same and most closely related to the phylogeny of Mojiang Henipavirus found in southern China. 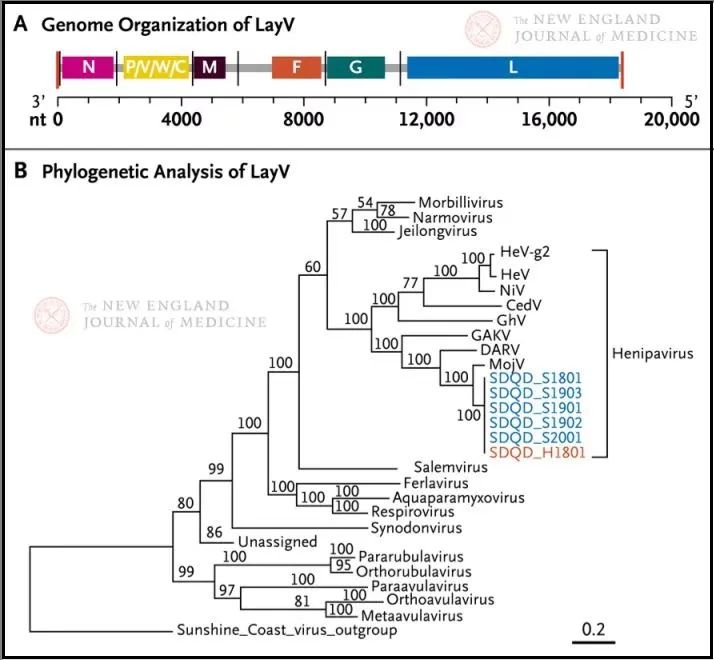 Subsequently, scientists found 35 patients with acute LayV infection in Shandong and Henan, China, of which 26 were only infected with LayV (no other pathogens were detected).

It is worth noting that scientists surveyed 25 species of wild small mammals, mainly in LayV RNA was detected in vivo, suggesting that shrew may be the natural host of LayV.

Chinese people who have experienced the “devastation” of the new coronavirus are most concerned about this new virus The question is – Will there be human-to-human transmission?

Will there be human-to-human transmission of the new virus, or a pandemic?

Previous reports suggest that human-to-human transmission of Henipavirus can occur, but research The authors pointed out that no cases and LayV haplotypes were significantly clustered in space or time.

In other words, it has not yet been determined whether LayV can be transmitted from person to person.

And according to the chart, we can see that the The discovery time spanned from 2019 to 2021, suggesting that the population may be sporadic rather than large-scale concentrated outbreaks.

In addition, statistics show that the mortality rate of human infection with Henipa virus is 40%~75%, and the mortality rate may also be related to the level of local medical and health care and treatment. and so on. Fortunately, its infectiousness is not very high, otherwise the harm will far exceed the new crown.

In general, henipaviruses are highly pathogenic to humans and cause death. The rate is also high, but the ability to spread from person to person is limited.

According to past experience, after human infection with Hendra virus, which is a Henipa virus, Mild cases can manifest as mild influenza-like illness, and severe cases can cause fatal respiratory or neurological diseases; while Nipah virus in the genus Henipavirus is listed by the World Health Organization as ten potential high-risk types to be concerned about in 2018 one of the infectious diseases.

There is currently no targeted vaccine or effective treatment for Henipa virus. The mainstay of treatment is control therapy to manage complications. In response to this, the World Health Organization said that in the event of a suspected case, isolation should be implemented as soon as possible, infection control measures should be implemented, and public health authorities should be notified immediately.

In the article, the researchers also pointed out that LayV is a newly discovered, possibly derived from animals, Nipah virus, which is associated with febrile illness in humans, warrants further study to better understand the associated human disease.

One of the researchers, Professor Wang Linfa, National University of Singapore Faculty of Medicine, said in an interview: “So far, These cases are not fatal or very serious. So it can be said that (we) should be vigilant about this new virus, not panic. But we need to be careful because there are many more similar viruses in nature, if there is a different If the virus jumps to humans, the situation may be different.”

Dr. Wang Xinyu also warned about this ,For virologists and epidemiologists, every newly discovered pathogen is a matter of importance. Once the virus of the parasitic animal host is adapted to humans, it may spread from person to person, and even cause a global pandemic like the new coronavirus. Monkeypox is a clear example.

In the early days, some scholars believed that “human-to-human transmission” of monkeypox would not occur, but now There has been community transmission. So far, there have been nearly 3,000 confirmed cases of monkeypox in the UK, which fully shows that we cannot take any pathogen lightly.

Name Controversial, is “Langya” too regional?

Although the new virus is not yet widely known to the general public, earlier The naming of “special” has caused a lot of controversy. When many media released news, LayV appeared in the public eye under the name of “Langya virus”.

According to experts’ explanation, Lang character, onomatopoeia, jade produced in Langye Mountain, the sound is clear and crisp, “The Voice of Lang Lang” ”, the interpretation of the word Ya is controversial, it may refer to the shape of the mountain, or it may refer to the onomatopoeia in exegesis. The current mainstream view is that the word “Langya” can be simply explained as precious and beautiful like pearls and jade.

This is also the reason why some people are dissatisfied with this name, believes that it has both strong The regional orientation of the word has tarnished the original beautiful artistic conception of the word.

There is a saying that the original name of the author of the paper is “Langya”, which was later published by the domestic media. The translation, became “Langya”.

In this regard, the author verified and found that on the official Chinese website of NEJM” NEJM Frontiers of Medicine”, the Chinese version of the newsletter was simultaneously published on August 4, and the word “Langya” was indeed used in the name. According to the rules of the academic world, the editor must confirm the Chinese name with the research team before publishing it. 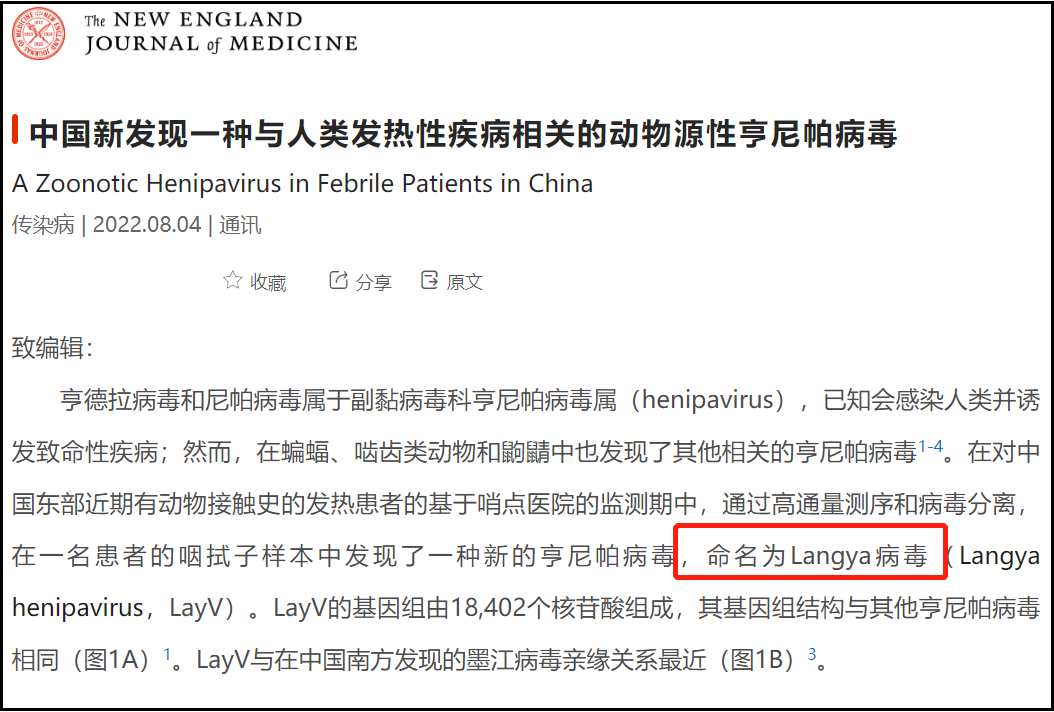 Image source: “NEJM Frontiers in Medicine Screenshot of the webpage

According to this analysis, naming the new virus “Langya” when the article was published should be a habitual use of place names. The ancient name may also be a taboo for today’s city names.

However, this does remind us of Scientists, in the era of turbulent clouds and tricky things and all things are media, maintaining a high degree of public opinion sensitivity should become one of the basic abilities.

➤ The latest document issued by the National Health and Medical Commission: Dynamic increase in the establishment of public hospitals! Does this make more sense than extreme “de-coding”?

➤ The hospital was found to be solely responsible for falsifying medical records, but why did the court reject all the patients’ claims?