Hypertension is an important risk factor for cardiovascular and cerebrovascular diseases, known as the “silent killer”. On November 13, in the “Clinical Practice Guidelines for Hypertension in China” jointly formulated by the National Center for Cardiovascular Diseases and the Chinese Medical Doctor Association, the diagnostic criteria for hypertension in adults in my country was lowered to 130/80 mmHg. As soon as the news came out, discussions were heated.

Although the afternoon of the 15th , The National Health and Medical Commission issued a document pointing out that the country has not adjusted the diagnostic criteria for adult hypertension, but it still caused countless people to conduct deep self-examination and sounded the alarm for the people of the country.

to some extent , Hypertension is a “lifestyle disease”, we must establish the awareness of “prevention is better than cure”, maintain a good lifestyle and a positive attitude, and let our blood pressure be obedient!

Possible partners I have to say, the farther away from my high blood pressure, the better! Besides “exercise more, less fat, less anxiety, etc.”, what else can be done to prevent high blood pressure? Recently, Nutrients magazine published an article EntitledJ-Shaped Association of Tomato Intake with New-Onset Hypertension in General Adults: A Nationwide Prospective Cohort Study‘s article, research shows thatEating tomatoes (that is, tomatoes) can effectively prevent new high blood pressure!

Previous epidemiological data suggest that high consumption of fruits and vegetables reduces the risk of high blood pressure< /strong>. Studies have shown that the dietary tomato intake is negatively correlated with the risk of several major chronic diseases such as hepatocellular carcinoma and bladder cancer , some studies have also found that supplementing tomato-related components such as lycopene is beneficial to blood pressure. It seems that tomatoes are really good! However, from the perspective of tomato as a daily food, whether it is related to new-onset hypertension in adults and what is the optimal dietary tomato intake is still unclear.

In order to let the answer float Based on the China Health and Nutrition Survey (CHNS), this study used a large-scale cohort data of 7 waves of CHNS from 1997 to 2015 to prospectively explore the association between dietary tomato intake and new-onset hypertension. A total of 11,460 subjects were included in the final follow-up analysis after excluding those younger than 18 years old, pregnant, or diagnosed at baseline with a history of stroke, myocardial infarction, or any type of cancer.

Using chi-square test or ANOVA to explore the characteristics of subjects under different dietary tomato intake.

The results show that in Of all subjects, 7075 (61.7%) did not consume tomatoes. Participants had a mean age of 41.7 years, and those who ate more tomatoes (Group 4) were more likely to be older, male, and married, and tended to have higher BMI, systolic and diastolic blood pressure, education, baseline alcohol consumption rates , total carbohydrate, fat and protein intake were higher than other groups, and were characterized by higher fruit and vegetable intake, body weightLess physical activity.

In order to eliminate the effect of less tomato products (canned tomatoes and tomato paste) consumed by Chinese, the researchers conducted a sensitivity analysis and found Intake of raw tomatoes was also significantly negatively correlated with the risk of new-onset hypertension, this result is really gratifying for those who like to eat raw tomatoes!

potential effect corrected The results of the stratified analysis were also very interesting. Among women or individuals who did not smoke or drink, the association between dietary tomato intake and the risk of new-onset hypertension was stronger. Participants may have high-risk features of endothelial dysfunction and chronic inflammation, with a much higher risk of developing hypertension. Factors such as age, BMI, baseline systolic blood pressure, fat, protein, and carbohydrate consumption did not modify the association between dietary tomato intake and new-onset hypertension. 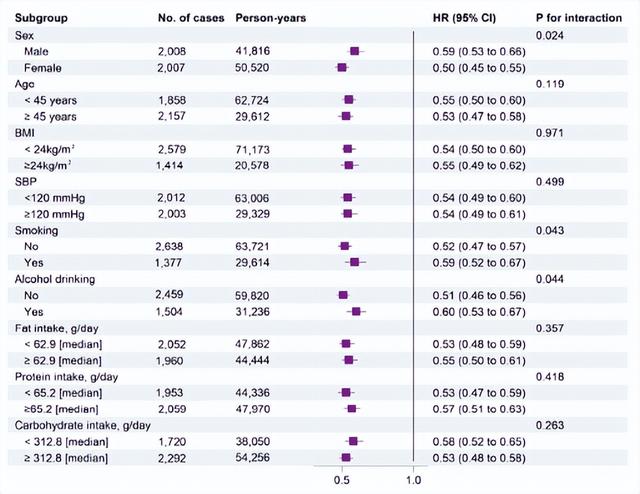 So, the tomato shot What is the biological mechanism that protects against the development of new-onset hypertension? At present, there are several opinions in the scientific research community, including lycopene can effectively reduce oxidative stress, hydrophilic compounds (mainly polyphenols) in tomato can inhibit angiotensin converting enzyme, potassium contained in tomato can lower blood pressure, etc. , the specific underlying mechanism needs further study.

Finally, the author pointed out that the current median dietary tomato intake in the Chinese population is less than 5g/d, and the PLCO screening According to the survey, the median dietary tomato intake of American subjects is about 13g/d. Although the tomato intake is lower than that of western countries, its various benefits to the human body can still be observed. But it needs to be explained that it is not that the more tomato intake, the better. Excessive intake of tomato may weaken its protective effect on the human body, which may be related to excessive intake of solanine.

Read this Article, delicious and healthy tomatoes come and arrange! May each of us have a healthy body!