*For medical professionals only

Young people must not be careless!

A doctor posted a series of numbers in a circle of friends, which aroused a lot of attention and discussion—— 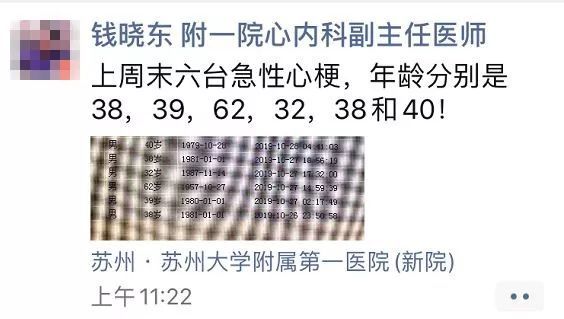 Qian Xiaodong, Deputy Chief Physician of the Department of Cardiology of the First Affiliated Hospital of Suzhou University, who posted this circle of friends, performed 6 acute myocardial infarction operations in their department over the weekend. One of them was a 38-year-old patient. Twice, so there are 5 patients in total, and the age is indeed generally younger.

Fortunately, these five patients were sent to the hospital in a timely manner and have been rescued.

He said, The most important thing in preventing myocardial infarction is to protect our blood vessels. Don’t age them faster than we age. After all, our lifespan largely depends on their lifespan.

As for how to protect blood vessels, it is nothing more than controlling weight, reducing social events, paying attention to rest, and insisting on exercise! Another important point is to quit smoking! Many substances in tobacco will accelerate the aging of our blood vessels!

Speaking of MI, this reminds me of another case. This is a young wife who has been living in the hospital corridor for seven days. Every time I pass this bench, I will have a few words with her, is it cold here, are you afraid?

She said it was at the door of the ward, and the nurses and security guards were there, so I wasn’t afraid.

She doesn’t really care about being afraid. Opposite the bench where she sleeps, is the cardiac intensive care unit (CCU), which is the security door of the cardiac intensive care unit. It is less than 10 meters inside. Her husband is lying on the hospital bed and is under 24-hour monitoring. He is only 35 years old. I asked her, why don’t you go to the guest house next to you? She said that this place is close to the child’s father, and I can see him and take care of him at any time.

I have seen too many myocardial infarction patients and their families, and this young couple is the most sad and sad one for me. Because her husband, only a 35-year-old young man, the father of two children, has partially necrotic heart muscle and has heart failure, and it is not known how much he can recover in the future.

And all of this could have been avoided. Because if the two of them knew a little bit of common sense about myocardial infarction and angina pectoris, they would not have come to this point.

This young patient starts two weeks ago. Xiao Sun, who was working in the suburbs of Beijing, suddenly felt a dull pain in his sternum, the bone down from his throat. He thought, got angry? Sore throat?

Actually, this is the first sign of angina, pain behind the breastbone.

The next day was Tuesday, and the pain in the sternum got worse. On the way to work, after driving on the highway, his left arm suddenly started to have pain, accompanied by chest tightness, and he couldn’t hold the steering wheel.

It worsens with exertion and relieves with rest.This is a very typical angina pectoris. And it has been strung to the left arm. At this time, his myocardial ischemia was very serious, and death had beckoned to him.

When he got home that night, he began to feel suffocated, his chest pains worsened, he couldn’t even lie down, and he spent most of the night sitting. The back of the breastbone is hot, like a sore throat that is seriously lit.

At this time, it was already an acute myocardial infarction, and his life was in danger at any time. His heart muscle continued to die massively. Xiao Sun still doesn’t know.

On Friday, he took his father-in-law to the hospital to see a lung disease, and then he got another orthopaedic number! Fortunately, the experienced orthopaedic doctor immediately realized something was wrong based on his description, and asked him to go to the heart center to have a look. Xiao Sun then clutched his chest and came to the center of his heart.

After rescue and treatment, Xiao Sun’s blood pressure returned to normal, and the damaged myocardium may recover, but it will take half a year to find out. In the best case, there is compensation, and there is no heart failure. In the most pessimistic case, heart failure worsens. At that time, it depends on the ejection fraction. If it is above 35%, the risk of sudden death is small, and if it is below 35%, it is very dangerous.

Xiao Sun’s experience is a typical tragedy, and such a tragedy is staged in the hospital almost every day. When I think of his young wife and two children who are guarding the corridor day and night, my heart is not happy either. Common sense, common sense, common sense! If they knew a little common sense about myocardial infarction and angina pectoris, this tragedy could be completely avoided!

So how to identify chest pain, how to know all kinds of discomfort, it may be angina pectoris, may be a precursor to myocardial infarction?

I will explain each one of them below.

Exercise-induced: Generally, its pain will be induced under the condition of exertion, such as walking, brisk walking, going up the bridge, going upstairs, having a full meal, etc. , or aggravated.

Relief with Rest: Rest immediately after the onset of pain and relieve pain after a while.

Nitroglycerin Relief: “Nitroglycerin” is nitroglycerin, which has the effect of dilating heart blood vessels. In the process of pain attack, sublingual nitroglycerin, if the pain is relieved, it also shows that the probability of angina pectoris is very high.

Over 2 points: The pain should last more than two minutes. If it’s lightning pain, it’s definitely not.