As a doctor, what are some of your everyday actions that others find annoying?

In the latest research report by the renowned medical website Medscape, doctors interviewed said they are seeing more and more doctors showing disrespect to colleagues and patients, being aggressive and angry at work , and even illegal acts.

More than 1,500 physicians participated in the survey, of which 41% had witnessed other physicians misbehave in their work environment, up 6% from 2021. A further 26% observed bad behavior by doctors outside of a medical facility, while only 38% said they had never seen it.

Interestingly, 85% of physicians surveyed denied bad behavior when asked about their performance over the past year. For those physicians who reported bad behavior among colleagues, they witnessed or experienced an average of 7 incidents of bad behavior over the past 5 years. 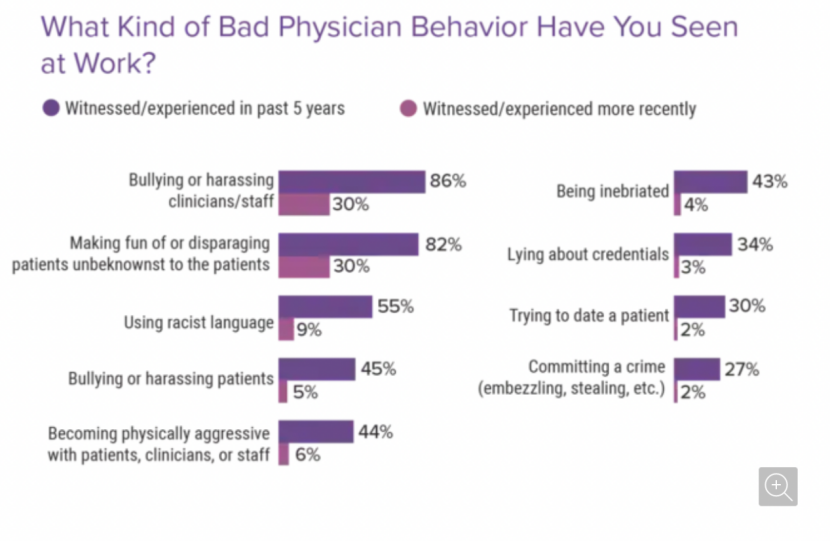 On a positive note, this year more doctors said they were “going out” to respond to other doctors’ misbehavior.

39% of the doctors surveyed said that when they saw other doctors’ bad behavior, they would point it out directly, 27% chose to report it to the upper management, and only 29% of the doctors Choose to ignore (35% in 2021).

However, when it comes to specific “disciplinary measures”, most doctors maintain a “tolerant attitude”, believing that they should be given a verbal warning (49%) or a conversation with the management (39%). Only 12% and 10%, respectively, thought they should leave their jobs temporarily, or be directly reviewed by a medical board.

It is worth mentioning that, of all the responses, female physicians were seen as only one-third as often as men. Drew Ramsey, MD, Columbia University analyzed the reasons and pointed out that compared with men, female doctors themselves have fewer career opportunities, and they are very aware that they do not have much room to “make mistakes”.

35% said they observed bad behavior from other physicians on social media, compared to apparent violations in the workplace.

One ​​doctor says he uses social media every week and sees doctors lashing out at those who hold opposing views. Another doctor said that he had seen some unbelievable and anti-scientific information, but it was stated by the doctor as fact for popular science.

There are also doctors who said that they saw other doctors “carrying goods” online, but the “health products” they promoted obviously did not have evidence-based medical evidence. But according to research, at least, most doctors consciously abide by another relatively clear “red line”, which is medical privacy.

“The vast majority of doctors try to avoid posting inappropriate selfies of themselves in medical settings, as well as any photos showing medical procedures.” The survey showed that more than 80% of doctors said they had not seen them Colleagues have this behavior.

The top three views on what causes physician misbehavior put the blame on the individual physician.

56% believe that bad behavior is due to physicians’ widespread “arrogance and arrogance,” and 52% believe that physicians bring emotions from their personal lives to work. Another 50% believe that with the passage of working years, doctors have become “tired” and no longer hold themselves to higher professional standards.

In addition to personal reasons, some people believe that bad behavior is caused by heavy work pressure (46%) and the mental impact of the new crown epidemic on doctors (27%), and 25% of them believe that Think: the requirements of patients are also increasing.

But whether the reasons are subjective or objective, most of the doctors interviewed were clearly concerned that the misbehavior of other doctors would affect society’s perception of the group of doctors. 70% believe that a doctor’s bad behavior can have ripple effects across the medical community. 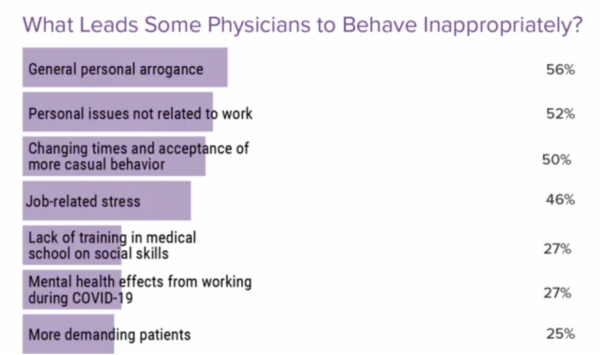 “What exactly is bad behavior?” said one respondent. “If you say sexual harassment, yes. But if it’s just wearing a tight swimsuit on vacation, or drinking alcohol, I don’t think it’s a problem.”