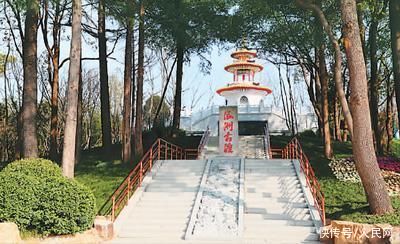 “Jingkou Guazhou is a river, and Zhongshan is only separated by several mountains.” The “Guazhou” written by Wang Anshi is an ancient ferry in Yangzhou, Jiangsu. Due to its special geographical location, it used to be a water and land transportation hub connecting the north and the south, and it was also a military hub where strategists struggled.

Guazhou Ancient Ferry is worth a visit.

We came to Guazhou Gudu Park, and after entering the gate, we walked along the “Guazhou Canal”, passing Yinbell Pagoda, Jinchun Garden and other scenic spots, and we went all the way to the edge of the Yangtze River. There is a tall Hanjiangkou archway on the bank. The four characters of “Jiangtian Shengjing” are written on the lintel. The overall shape is solemn and majestic, like a protector, watching the intersection of the Grand Canal and the Yangtze River day and night. There is a small earth mountain not far from it. There is a tide-viewing pavilion on the mountain. In front of the pavilion, there is a stone tablet of “Guazhou ancient ferry”. I heard from the local people: Historically, the Yangtze River was at the foot of Xiaotu Mountain, and the Guazhou Ferry Port was also here, but it was only when the Yangtze River moved northward that it was far away.

Going past the “Guazhou Ancient Ferry” monument, there is a caisson pavilion and a statue of Du Shiniang. In the 1970s, I worked as a film critic at the Chaoyang District Cultural Center in Beijing. I watched the movie “Du Shiniang” and wrote a review. When I came here today, I evoked that sympathy.

Guazhou Ancient Ferry is not only a place for ships and trade between the north and the south, but also a place for literati and writers to express their emotions and display their talents. There are also many well-known poems left here, such as Bai Juyi’s “Bian water flows, Si water flows, flows to Guazhou ancient ferry, Wushan is a little sad”, Zhang Ji’s “Heroes hate, ancient and modern tears, water flows east. Only the fishing rod and the bright moon” , Shangguazhou”… A little ahead of the caisson pavilion is the Poetry Gallery, some poems are carved on the wall, some are carved on the stone. I saw the poems of Meng Haoran, Liu Yuxi, Wang Anshi, Yuan Mei and others, and I liked them very much, but my memory was poor, and I couldn’t remember them after memorizing them for a long time. Later, I took pictures with my mobile phone.

There is also a Zhang Ruoxu Memorial Hall near Guazhou Gudu Park. The pavilion is three-storey high and has rich exhibits. Although I had read “Spring River, Flowers and Moon Night” in school, I knew Zhang Ruoxu well, but I was still surprised during the visit: Zhang Ruoxu and He Zhizhang were equally famous, and were called “Four Scholars of Wuzhong”; although Zhang Ruoxu only survived with two poems, but His “Spring River, Flowers and Moonlight Night” was praised by later generations as “a single story covering the whole Tang Dynasty”.

In the Zhang Ruoxu Memorial Hall, we sat quietly on the chairs to enjoy “Spring River, Flowers and Moonlight Night”. The picture with the river as the background and the moon as the center unfolded in front of us. The artistic conception created by it made people intoxicated. Crazy.