How many patients should a doctor see per day?

“There are 75 appointments open in half a day, 240 minutes from 7:30 to 11:30, and an average of 2-3 minutes to see a patient. Basically, the patient doesn’t say two or three words, and the doctor casually Just take a look and prescribe the medicine, go through the scene hastily, it’s too irresponsible.”

On August 14th, some netizens complained to the Ningbo Municipal Health Commission that individual doctors in the dermatology department of Ningbo No. 1 Hospital saw 75 patients in one morning and questioned their outpatient volume. , the quality of medical treatment cannot be guaranteed. The hospital responded that the high workload is to meet the needs of patients as much as possible, and doctors usually delay off-duty hours to complete the day’s admissions.

This complaint is the patient’s intuitive experience of “short visits.” In the past, the problem of “three longs and one short” (long time for registration, waiting for a doctor, taking medicines, and short consultation time) was often criticized by patients. The phenomenon still exists.

How many patients can a doctor see a day reasonably? Several doctors told the “medical community” that there is no uniform standard. Some departments that do not require operations and have quick consultations will see more patients. The consultation time of a single patient is mostly about 5 minutes, and 100 outpatient visits in half a day. It’s not uncommon.

One doctor, up to a day

Official information shows that the complained Ningbo No. 1 Hospital outpatient working hours are 7:30-11:30 am, 14:00-17:00 pm, a total of 7 hours a day, Dermatology outpatient volume ranks first among all hospitals in the city.

According to the appointment registration information on the “Ningbo Public Health Service Platform”, the hospital’s dermatology department has a maximum of 150 outpatient appointments in a single day, and some doctors have received over 50,000 patients in total. 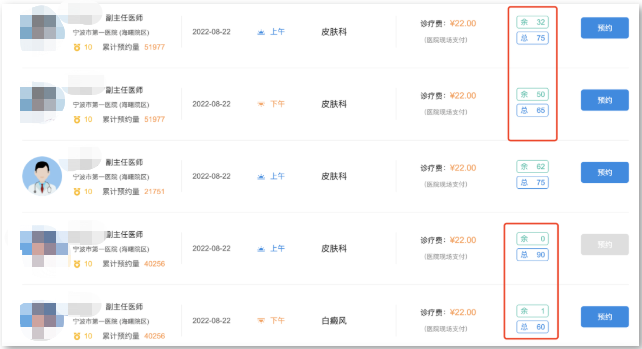 In the case of not counting the plus number, a doctor will consult a maximum of 150 patients on the same day, and among other doctors in the department, the number of outpatient appointments open on a single day generally exceeds 100, including 140, 125 and 110, the least is a resident doctor, and the upper limit of all-day outpatient appointments is 80.

A maximum of 150 patients should be consulted during the 7-hour working time, and the average time allocated to each patient is less than 3 minutes. In this regard, the complainant asked the hospital to make rectifications.

strong> “Based on 240 minutes of work in the morning, a doctor can issue a maximum of 30 numbers. Even if the doctor is idle, the quality of rest and medical treatment must be guaranteed for the doctor.”

The source of hospital appointment registration is set according to the characteristics of specialist diagnosis and treatment and the conditions of doctor visits. At present, the demand for medical treatment of the people is constantly increasing, and the situation of shortage of medical resources is an objective existence, and the high workload also hopes to meet the needs of patients as much as possible. The outpatient service adopts the method of appointment registration to ensure that the patients who have made an appointment can see the doctor on the same day, and the doctor usually delays the off-hours to complete the consultation on the same day. Excessive volume of consultations can cause physician fatigue,

“Dermatology is special, most diseases rely on outpatient clinics, so the outpatient volume will be much larger than that of general departments.” Tang Jiaoqing, a dermatologist and doctor of medicine from the top three hospitals, told “Medicine In the world”, it is a common phenomenon that the upper limit of dermatology appointment registration is high.

In his opinion, most dermatology outpatient clinics take a few minutes, which can not only serve more patients, but also generate more revenue for the hospital, which is a good side. “There are many types of skin diseases, many common diseases, doctors can see at a glanceIt can be seen that there is no need to do special physical examinations and laboratory tests. “

However, according to clinical experience, Dr. Tang Jiaoqing believes that 75 or even 90 registrations in half a day is still “too much”. Taking the dermatology department of the top three grade-A hospitals he worked for as an example, the upper limit for most doctors to register for half a day is 30-40, with a maximum of 60, and the average time allocated to each patient is about 5 minutes.