With the continuous development of medical technology and the update and iteration of immunotherapy, the treatment of advanced gastric cancer is no longer unattainable Dream, more and more gastric cancer patients are successfully controlled by suitable immunotherapy.

In this issue, let’s take a look at the new progress of cellular immunotherapy in the treatment of gastric cancer~

CAR-T cell therapy works by taking a patient’s own T cells and modifying them using genetic medicine techniques so that they can produce a type of therapy called a CAR (Chimeric Antigen Receptor) CAR is like a “radar”, can help improve the ability of T cells to recognize tumor cells . The T cells that are equipped with “radar” are called CAR-T cells. 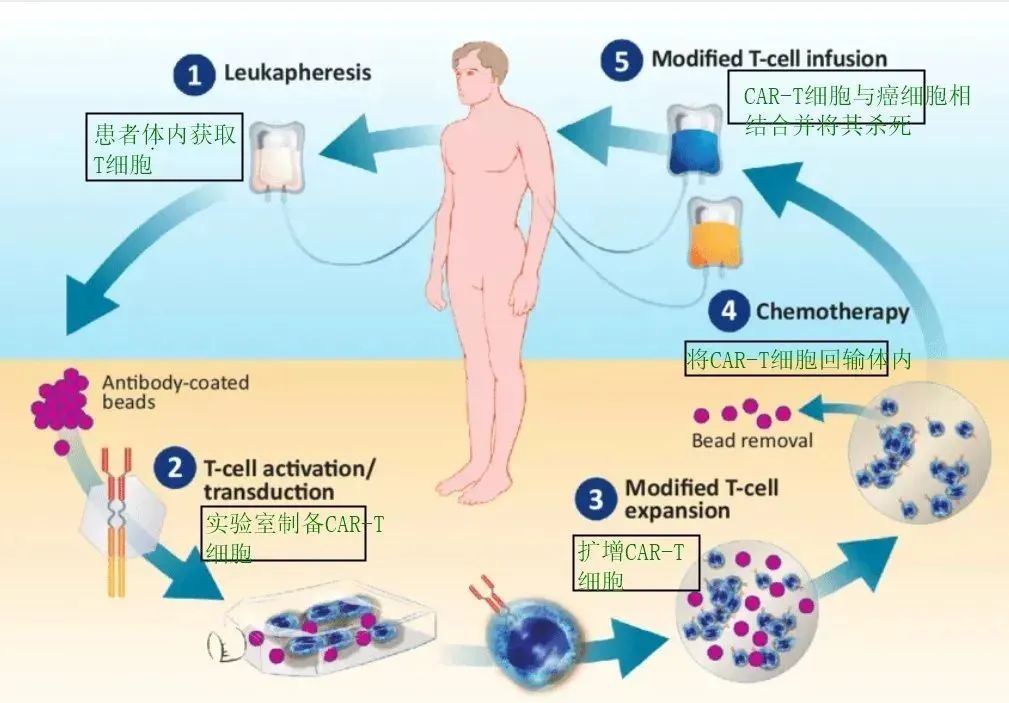 Simply put, CAR-T cell therapy is a highly personalized A treatment that uses a patient’s own cells to fight cancer.

This finding indicates that CLDN18.2-specific CAR- T-cell therapy may be a viable treatment option for patients with cancers of the digestive system. These results provide new insights into the use of CAR-T cells for the treatment of solid tumors. However, the final results of this trial and subsequent larger trials are needed.

The cytotoxic T lymphocyte (CTL) technology is also based on T cell immunotherapy, which is a kind of adoptive cell therapy. p>

In layman’s terms, this technology mainly uses proteins that are unique to cancer cells, but not found in normal cells or in very low levels as bait.< s strong>Select the “one-in-a-million” lymphocytes that can really fight cancer in the peripheral blood, and then further improve and expand in vitro, Finally, it is returned to the patient’s body.

Recently, the first MTCA-CTL solid tumor cell therapy drug KACM001The product of autologous lymphocyte injection was approved by the China Food and Drug Administration to start clinical trials[7], to be combined with Sigio/oxaliplatin or cisplatin in the treatment of locally advanced unresectable or metastatic gastric cancer.

NK cells, the full name in English is “Natural killer cell”, as the name suggests, “natural killer” cells (NK cells) are A type of lymphocyte that exists in the innate immune system and does not accept instructions from other cells, as long as it finds foreign objects such as cancer cells, it will attack, so this is why it is called an innate killer span>.

Although NK cells can effectively hit their targets, they do not have the same ability to “remember” targets as T cells.

So great scientists came up with the ideaby introducing preprogrammed NK cells into In patients, such NK cell therapy can make up for the regret of “forgetting” the target. These preprogrammed natural killer cells are tailored to specific cases or patients so they do not trigger adverse reactions and can adapt to naturally trigger and control immune responses as needed.

CYNK-101is made by a specific type of immune cell NK cells. Recently, the FDA granted orphan drug designation to CYNK-101, which is used in combination with standard chemotherapy, anti-HER2 antibody trastuzumab and PD-1 inhibitor pembrolizumab,. First-line treatment of patients with locally advanced unresectable or metastatic advanced HER2-positive gastric cancer is expected to bring longer survival to these patients..

What is the five-year survival period? Is it safe for gastric cancer patients to spend five years? Come togetherListen to what Professor Li Jin, Chief Physician of the Oncology Department of Shanghai Dongfang Hospital has to say~