*For medical professionals only

“img class=”responsive ” sizes=”(min-width: 320px) 320px, 100vw” src=”https://mmbiz.qpic.cn/mmbiz_png/x5F5KAyDKw19I4VvcibrfNia7lD1fial5KribXqZxjxMxtoc3ichKKz6ib3w5kJias8QNRBYGn80MM0AxEgOvRLib>p>width=”6400″ >Statins and PCSK9 inhibitors are both drugs for the treatment of hypercholesterolemia, but there is uncertainty about the ongoing effects of these two classes of drugs on neurocognition.

Mendelian randomization (MR) of drug targets can analyze genetic variation that mimics the pharmacological inhibition of drug gene targets, and regression estimates reflect the effects of long-term drug use. Important analytical tools to strengthen causal inferences about the potential impact of these drug target genes in cardiovascular disease, cognition and dementia.

Statins are the standard drug for the treatment of hypercholesterolemia. Despite their widespread use, statins are generally underused due to suspected adverse effects such as cognitive impairment and an increased risk of dementia. Recent observational studies have reported no association between statins and cognitive decline, but case studies have found impaired cognition and memory in patients taking statins. Conversely, studies have found that statins may reduce the risk of dementia, Alzheimer’s disease (AD), and reduce cognitive impairment in some patients, highlighting uncertainty about the ongoing effects of statins on neurocognition.

Proprotein convertase subtilisin/Kexin 9 (PCSK9) is an important low-density lipoprotein Cholesterol (LDL-C) regulators have become another target for cholesterol-lowering drug development. The first class of PCSK9 inhibitor (PCSK9i) drugs, including the monoclonal antibodies ilovolumab and aliximab, have been extensively studied for cardiovascular outcomes in multiple phase II and III clinical trials. FDA-approved for the treatment of adults with heterozygous familial hypercholesterolemia or clinical atherosclerotic cardiovascular disease requiring additional lowering of LDL-C. However, the long-term effects of PCSK9 inhibition on neurocognitive endpoints have not been investigated.

Data from short-term randomized controlled trials suggest that PCSK9 inhibition has a safe neurocognitive side effect profile. The EBBINGHAUS trial, which evaluated a subset of the FOURIER Phase III evolumab clinical trial, followed a cohort of patients taking evolumab and reported no apparent adverse neurocognitive outcomes. However, these patients were already on stable, moderate-to-high-intensity statin therapy, complicating disentanglement of the drug’s specific effects on neurocognition. PCSK9 is known to affect central nervous system development, neural differentiation, and neuronal apoptosis; therefore, inhibition of PCSK9 may affect brain function. Furthermore, neural PCSK9 expression in the adult brain has been shown to be upregulated in disease states including AD, alcohol use disorder, ischemic stroke, and neuropsychiatric disorders. Therefore, given the lack of data from long-term randomized controlled trials evaluating the neurocognitive effects of PCSK9 inhibition, preclinical studies emphasizing the potential role of PCSK9 in brain function, and the continued development of other PCSK9 inhibitors, to determine whether long-term PCSK9 inhibition is associated with neurocognitive effects It is important to be aware of side effects.

Mendelian randomization (MR) of drug targets to analyze genetic variants that mimic pharmacological inhibition of drug gene targets , the regression estimates reflect the effects of long-term drug use and are an important analytical tool to strengthen causal inferences about the potential effects of these drug-targeted genes in cardiovascular disease, cognition, and dementia. However, the underlying neurobiological mechanisms of cognition and dementia are complex, and previous MR studies have only included a broad range of neurocognitive variables. Therefore, a more refined analysis using detailed neurocognitive endpoints will help identify any adverse effects that may limit the clinical benefit of PCSK9i drugs and help compare this new intervention with standard-of-care statins.

We extracted from genome-wide association studies primarily based on European ancestry Single-nucleotide polymorphisms of 3-hydroxy-3-methylglutaryl-CoA reductase (HMGCR) and PCSK9, summary-level statistics on low-density lipoprotein cholesterol, and drug-targeted Mendelian randomization , using a range of results to surrogate the potential neurocognitive effects of drug-based inhibition of PCSK9 and HMGCR to capture the complex facets of cognition and dementia.

Using data from a combined sample, in approximately 740,000 participants,

a neutral cognitive profile associated with inhibition of the gene PCSK9 was observed, p>

had no significant effect on cognition, memory, or cortical surface area. 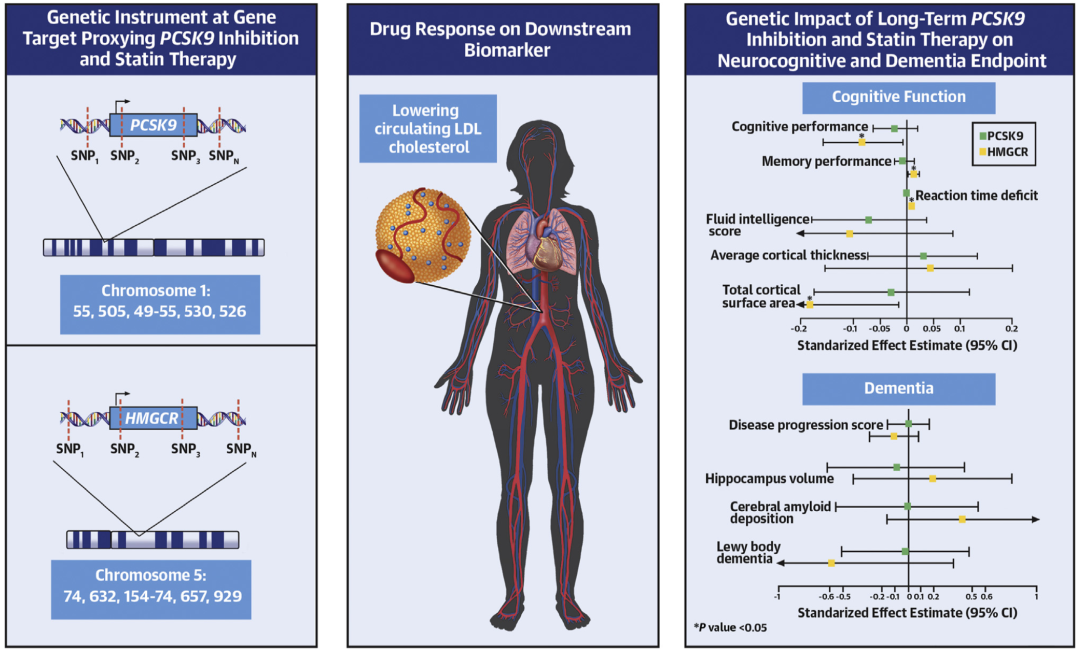 Gene-mediated PCSK9 inhibition and statin use on neurocognitive outcomes span>

Failed to find a broad range of cognitive function and dementia endpoints Genetic evidence of adverse effects associated with PCSK9.

In contrast, adverse neurocognitive effects associated with HMGCR inhibition were observed that may be offset by the cardiovascular benefits of statins, but vigilance remains.

Focus on individualized treatment of HFrEF, how to improve Good choice of drug sequence and accelerated titration?

dry food| ischemia Coronary Revascularization in Cardiomyopathy: Routine Clinical Practice and Evidence Should it be limited to 1 week?

Case | What can be found besides left bundle branch block?