Alzheimer’s disease (AD) is the most common neurodegenerative disorder in older adults, with symptoms such as cognitive impairment, memory imbalances, and behavioral abnormalities. According to the World Health Organization, at least 50 million people worldwide suffer from Alzheimer’s disease. In contrast, women are more susceptible to the disease than men, and women are almost twice as likely to develop the disease.

Why is Alzheimer’s more unfriendly to women? If the reasons behind it can be found, it may be possible to find better ways to protect women and reduce the burden of disease.

In response to these questions, a new paper published in the leading academic journal Cell finds that A gene on the X chromosome may explain sex differences in Alzheimer’s disease

strong>. And we know that the X chromosome is one of the two chromosomes that determine sex. More importantly, Further targeting the protein produced by this gene, ubiquitin-specific peptidase 11 (USP11), is expected to develop new drugs to treat Alzheimer’s disease.

In this study, researchers at Case Western Reserve University found that both in female mice and in female brain tissue, the USP11 enzyme is The expression levels were higher than the corresponding males. This increase may lead to the aggregation of pathological tau protein in nerve cells, and eventually damage nerve cells, which is a typical pathological phenomenon of Alzheimer’s disease. 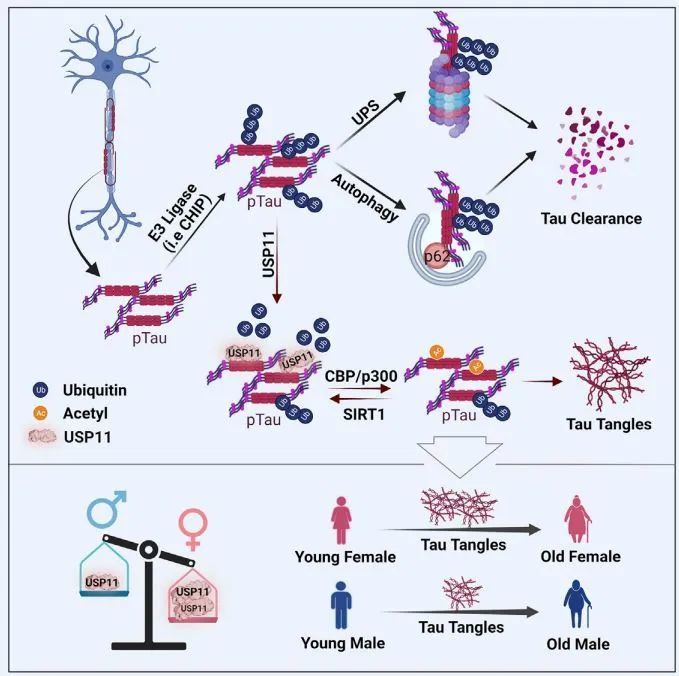 Researchers used a mouse model expressing pathological tau in the brain to simulate the development of Alzheimer’s disease and found that elimination of USP11 reduced tau accumulation in the brains of female mice , and this change further protected female mice from cognitive impairment..

Although mouse models may not fully reproduce the tau pathological changes seen in the human brain, researchers also found that in the brains of women with Alzheimer’s disease, the strength of USP11 There was a significant positive correlation with tau protein pathology. This correlation is higher than in men. These results suggest that the overactivation of the USP11 enzyme in females contributes to the increased susceptibility of females to tau pathology in Alzheimer’s disease.

The researchers say it is theoretically possible to develop drugs to inhibit the action of the USP11 enzyme, which will also be the focus of follow-up research. “We are particularly excited about this discovery as it provides a basis for the development of new neuroprotective drugs,” said study leader Professor David Kang. “This study also sets a framework for identifying other X-linked factors that Factors may increase women’s susceptibility to other tauopathies.”

[2] Why women may be more susceptible to Alzheimer’s disease. Retrieved Oct. 8, 2022 from https:https://www.eurekalert.org/news-releases/966854