September 29, 2022 marks the 23rd World Heart Day. At present, cardiovascular disease has become one of the major diseases that threaten human health. As a new discipline, “cardiac rehabilitation medicine” has gradually become an indispensable part of the “rehabilitation” process of patients with coronary heart disease. 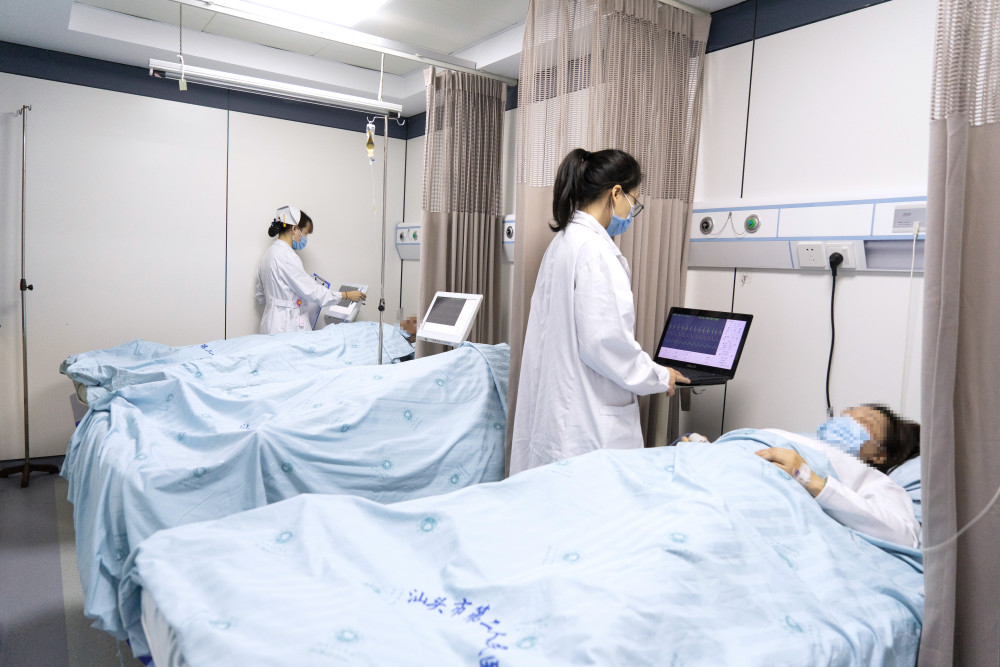 Physicians at the Cardiac Rehabilitation Center are medically monitoring the patient.

■Can I exercise after a heart stent is installed?

A 50-year-old patient, Mr. Wang, had an acute myocardial infarction last year. He underwent an interventional procedure to install a stent. After his condition improved, he was discharged from the hospital to recover. After the stent was installed on the heart, Mr. Wang was always worried that the stent would be damaged by exercise, so he lived a “flat” life at home, and his mood became depressed.

Chen Guijian, deputy director of the Department of Cardiovascular Medicine of the Second People’s Hospital of Shantou, introduced that it is a misunderstanding that patients with cardiovascular disease cannot exercise after surgery. Modern rehabilitation medicine has confirmed that scientific and rigorous individualized cardiac rehabilitation can help patients return to society, work and life as soon as possible, both psychologically and physically.

“Cardiac rehabilitation includes five prescriptions: drugs, psychology, exercise, smoking cessation, and nutrition. It promotes the recovery of patients’ cardiac function through comprehensive guidance.” Introduced by Chen Guijian, Cardiac Rehabilitation The drug prescriptions in can provide patients with a comprehensive drug treatment plan; psychological prescriptions can help patients overcome the fear of disease; exercise prescriptions can improve myocardial vitality, safely and effectively improve the cardiac function state of patients with chronic heart failure, enhance activity tolerance, and improve patients. quality of life. However, it should be noted that cardiac rehabilitation must be carried out under the guidance of professional doctors to gradually improve physical fitness and avoid adverse reactions.

According to Mr. Wang’s condition, the doctors from the Cardiac Rehabilitation Center of Shantou Second People’s Hospital arranged for him to check the cardiopulmonary exercise function, and checked his blood pressure, heart rate, electrocardiogram, lung function and other indicators. strict medical monitoring. During the examination, Mr. Wang did not have chest pain or dyspnea that he was worried about. The examination results showed that his cardiopulmonary function was normal and there was no myocardial ischemia. Based on a number of testing indicators, the doctor formulated a detailed cardiac rehabilitation plan for Mr. Wang, gave him detailed guidance in five aspects, including smoking cessation, drugs, nutrition, psychology, and exercise, and tailored aerobic exercise for him. prescription. After rehabilitation, he is now able to walk and meet friends as he did before his myocardial infarction. ■”Stent” is not a one-time-for-all, cardiac rehabilitation should not be ignored

The 56-year-old patient, Lao Chen, often has some dinners and entertainments, and often stays up late with alcohol and tobacco. Early last year, he suddenly felt severe chest pain. After being rushed to the hospital for treatment, he was diagnosed with acute myocardial infarction, received interventional therapy. After being discharged from the hospital, Lao Chen put aside the doctor’s advice and continued to maintain the bad living habits before the illness. Six months later, he was admitted to the hospital again due to myocardial infarction. Under the doctor’s suggestion, Lao Chen received cardiac rehabilitation after surgery, and started a healthy life of regular work and rest and scientific exercise.

Chen Guijian introduced that when a patient with acute myocardial infarction is clinically cured and discharged from the hospital, although the symptoms disappear and the examination indicators basically return to normal, it does not mean that the patient is completely cured. Clinical data show that there is still a 20% to 30% probability of re-stenosis in patients who have let go of the stent, and even some patients have re-stenosis at the original site.

“The reason why this happens is directly related to the patient’s failure to undergo cardiac rehabilitation.” Chen Guijian introduced that the treatment of the disease does not only stop at the treatment of the disease itself. Treatment should also pay attention to changing unhealthy lifestyles. In addition to taking medicine on time and reviewing regularly, lifestyle adjustments should also be made under the guidance of cardiac rehabilitation. Not only should “stretch your legs”, but also “keep your mouth shut”, quit smoking and drinking, and avoid problems such as irregular work and rest, overeating, etc.