This is a promise made by Chen Dongsheng, founder, chairman and CEO of Taikang Insurance Group, at the 2022 World Health Expo.

On the same day, through a series of selections, 38 PIs (heads of laboratories) participated in the “Frontiers of Metabolism and Health Biomedicine and the 2022 Summer Academic Activity of Taikang Life Medical Center of Wuhan University” at the Health Expo “At the scene, they received letters of appointment jointly issued by Wuhan University, Taikang Life Medical Center and Taikang Insurance Group. In the future, they will lead the promotion of more cutting-edge life medical research projects. 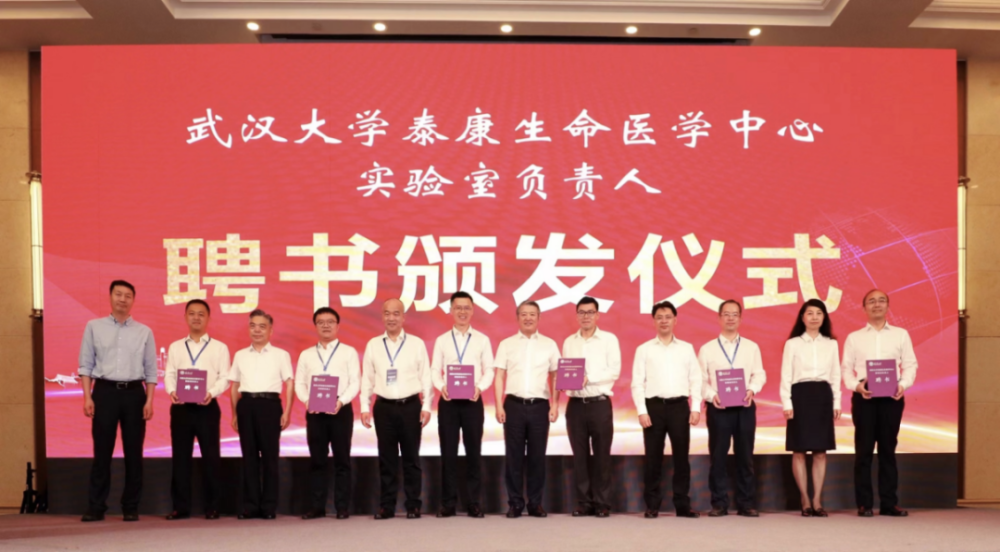 This is the continuation of Taikang’s donation of one billion yuan to Wuhan University a year ago to establish the “Wuhan University Taikang Medical and Education Fund”. Obviously, Taikang, which is a pioneer in running medical services with insurance funds, has initially shown its further achievements in the integration of medical education and research.

As a relatively independent entity scientific research institution of Wuhan University, Taikang Life Medical Center adopts international advanced management and operation mechanism and modern technology PI system (laboratory leader) to create a first-class life medical public The scientific research platform focuses on the major frontiers and cross-cutting issues of medicine and life sciences to carry out disciplinary research, so as to continuously improve the scientific and technological innovation capabilities of my country’s medical and life sciences and solve the problem of “stuck neck”.

In China’s scientific research funding system, funding sources mainly come from the National Natural Science Foundation of China and the Ministry of Science and Technology. Due to the limited number of applicants, they are often unable to carry out high-level scientific research. . In Song Baoliang’s view, if excellent PIs (laborators in charge) can be provided with adequate research funding, they can explore more adventurous topics. “In this way, the scientific and technological returns and the returns of scientific research achievements will be even greater.”

Up to now, Taikang Life Medical Center has established a scientific advisory committee composed of more than ten academicians including tenured professor of Duke University and foreign academician of Chinese Academy of Sciences Wang Xiaofan. , National Outstanding Youth and Changjiang Scholars are the academic leaders, and the Four Young Talents are the high-level innovation team of young academic backbones.

“The future center will develop into a high-end research institution with 100 PIs. The Scientific Advisory Committee will check the scientific research level of PIs and laboratories, and introduce a rolling mechanism to ensure that The high level of research in the center.” Song Baoliang said.

The latest research result of the center is that on August 3, the laboratory of Song Baoliang, academician of the Chinese Academy of Sciences, dean of the Taikang Medical College of Wuhan University, and director of the Taikang Life Medicine Center of Wuhan University, was in Nature (“Nature”). ) published a paper entitled “Inhibition of ASGR1 decreases lipid levels by promoting cholesterol excretion”. The study found a new lipid-lowering pathway—through the discovery of a new pathway, cholesterol can be excreted into bile, which in turn shrinks the gallbladder, bile enters the intestine, and cholesterol can leave the body through feces. This marks that Taikang Life Medical Center has made a major scientific breakthrough in the field of life medical research. 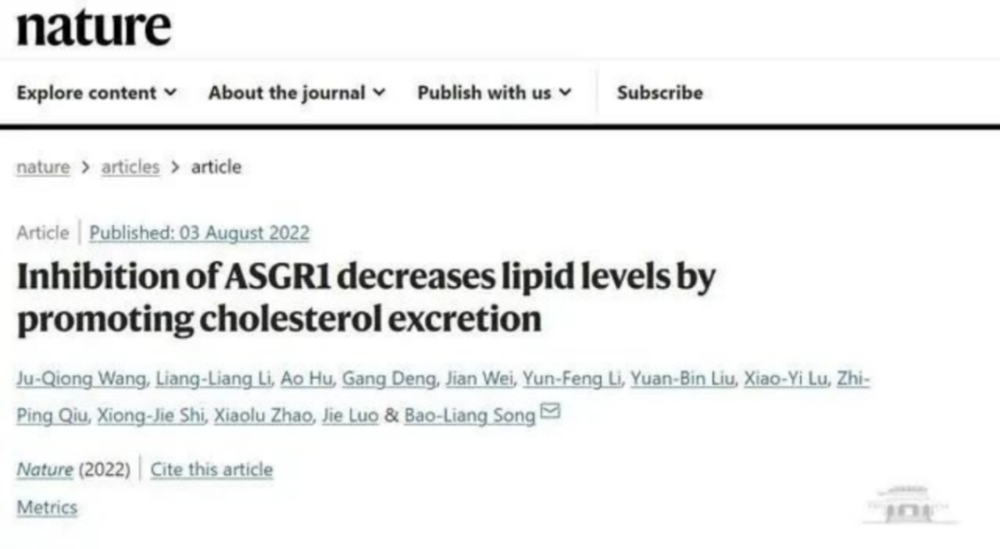 Why do you need to emphasize the integration of medical, teaching and research in running a medical institution with insurance funds?

At present, Taikang is making every effort to promote the integration of “medicine, teaching and research”, and has deployed five medical centers across the country, including Taikang Xianlin Drum Tower Hospital, Taikang Tongji (Wuhan) Hospital, and Taikang Southwest Medical Center (under preparation). ), Shenzhen Qianhai Taikang International Hospital (in preparation), Taikang Ningbo Hospital (in preparation), the generalThe number of body beds exceeds 5,000. Among them, the longest operating time is Taikang Xianlin Drum Tower Hospital.

In terms of teaching, the hospital cooperates with the local Nanjing University School of Medicine and has become an internship base for medical students majoring in nursing and elderly care.

In terms of the construction of characteristic disciplines, this year Taikang Xianlin Drum Tower Hospital officially established the first geriatric medical center in the Taikang medical system. Combining post-rehabilitation care and multidisciplinary cooperative diagnosis and treatment according to the characteristics of coexistence of multiple diseases among the elderly, we hope to build a technology innovation base for Taikang’s medical and healthcare integration, a model innovation base and a highland for innovative research and development of insurance payment methods.

As for Taikang Tongji (Wuhan) Hospital, which was rapidly built after the new crown epidemic, at the beginning of planning, according to the characteristics of insurance-funded hospitals and the characteristics of the ageing population, the “strong” The operation mode of “specialty, comprehensive” and the discipline construction project of “2+4+N”. “2” is the subject group of geriatric health medicine and oncology. “4” is ophthalmology, nervous system MDT, digestive system MDT and motor system MDT. “N” is to establish the model of MDT multidisciplinary joint diagnosis and treatment. The discipline layout of Taikang Tongji (Wuhan) Hospital are all key disciplines related to population aging, and the hospital has also been awarded the first batch of elderly-friendly medical institutions in Hubei Province.

Taikang Tongji (Wuhan) Hospital has reached cooperation with Wuhan University and Tongji Hospital affiliated to Tongji Medical College of Huazhong University of Science and Technology. It is precisely because they are in Wuhan that Taikang Tongji (Wuhan) Hospital will also There are more opportunities to carry out medical education and research cooperation with Taikang Life Medical Center platform.

Then, as an insurance company, why does Taikang make great efforts to promote the integration of medical education and research?

In this regard, Liu Tingjun, President and Chief Operating Officer of Taikang Insurance Group, thought very clearly, “Taikang’s medical system must be placed in the middle of the closed loop of our large insurance. In this world The most suitable institutions for medical care are the government, universities, religious and commercial insurance companies. The government is a public responsibility, universities are for research purposes, religion is for charity, and commercial insurance companies want everyone to be healthy, which is in line with the company’s interests .”

Under such a big logic, when Taikang deploys medical care, considering the long-term sustainability of the business model and the high efficiency of operation, the development path of integration of medicine, teaching and research is A natural choice. “Put the construction of the discipline talent team in the first place. On this basis, through efficient and refined operation management, we hope that the ultimate goal is to provide patients with high-quality services, but at the same time, it is also efficient. Therefore, the core of improving our quality and technology is the construction of subject talents.”

In the age of longevity, Taikang’s new answer sheet

Human society has entered an era of longevity, one of which is the ever-increasing life expectancy. With the continuous advancement of human knowledge and technology, people are also constantly fighting the death threat caused by disease and aging. The age of longevity is not just a demographic phenomenon, but also a profound change that is about to take place in the entire society.

Reviewing Taikang’s 26-year industrial layout, from the initial insurance and asset management business, to entering the elderly care industry in 2007, and deploying the medical industry in 2013, combining insurance payment with medical care services, It has formed a big health industry ecology with three closed loops of “longevity”, “health” and “abundance”.

As a pioneer in medical treatment with insurance funds, Taikang has come a long way. It is not difficult to see that Taikang is trying to hand over a new answer sheet and plan to China, which has entered the era of longevity, with its own exploration.

Chen Dongsheng, founder, chairman and CEO of Taikang Insurance Group, believes that the reason why Boston, Silicon Valley, and San Diego can become the center of life sciences in the United States is because Harvard, Massachusetts and other universities, The convergence of hospitals, that is to say, the integration of “industry-university-research” has created the top medical care.

This is also the reason why Taikang Medical insists on the integration of medicine, teaching and research. As for the grand picture Taikang wants to build? The answer given by Liu Tingjun is a large and high-quality medical system established by the world’s top 500 financial institutions. Taikang said that in the future, Taikang Medical will continue to aim at the goal of “building a high-quality medical service brand featuring ‘the integration of medical insurance, medical care and health care’, and the integration of medical, teaching and research”, and will continue to deploy physical medical care, promote insurance payment and medical care. Based on the combination of health care services, and relying on the scientific research and clinical capabilities of Taikang Medical College and Taikang Life Medical Center, we will continue to promote the integration of medical, teaching and research, providing continuous development momentum for Taikang’s large health ecosystem, and ultimately satisfying people’s desire for longevity, health, and wealth. demand.