After the lights go out, the sleeping beauty is in the sound of rain.

Warming the fire in the ashes, adding incense and warming the cage.

Dawn is clear and cold, and the leaves are full of frost and red.

Click the green mark above to listen to the hostMyolieRead Poems 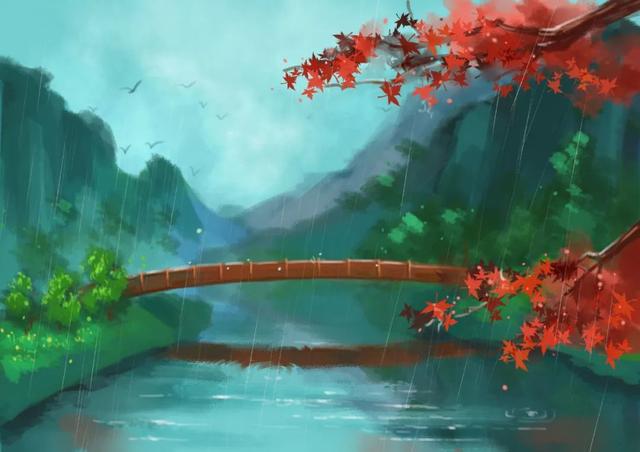 It seems that the whole autumn night is cold and icy, and the only one left at ease is “I”, a frail and sick old man.

After the lights go out, I lie down and sleep late; in the sound of autumn rain, the dream is very beautiful.

Put the water bottle in the burnt ashes, and the water will be hot; put the incense stick in the quilt, and the quilt will be warm.

In the autumn morning, the sky is clear, but the cold air has not dissipated, so I don’t want to get up, and I see red frost on the stone steps outside the window leaf.

Bottle: A baking bottle for baking.

This is an autumn sleep poem by Bai Juyi, a poet of the Tang Dynasty.

The wonderful thing about this poem is that it uses autumn scenery to write autumn feelings, uses bleakness to write indifference, uses ruthlessness to write affection, and uses sadness to write happiness The environment embodies the poet’s different aesthetic tastes, and can maintain an optimistic and indifferent attitude in the midst of misery.

“Three cold autumn nights, an old man at ease.” The first couplet said that it seemed that the whole autumn night was full of cold and The cold, carefree person is probably only “I”, a frail and sickly old man. This is to write “The Coolness of Autumn Night”.

The word “cool and cold” refers to the night of late autumn, the wind and rain are bleak, and the chill hits people, which puts a layer of late autumn on the whole poem background color.

The expressions of “three autumn nights” and “three autumn leaves” are similar, referring to the whole autumn night. It is consistent with the “three autumns” in “Wind” written by Li Qiao, a poet of the Tang Dynasty, “Three autumn leaves can bloom after three autumn leaves.” In other words, the poet’s night in autumn is always cool and cold. Naturally, there are reasons for the weather, and more importantly, it is a true portrayal of the poet’s inner world. At that time, the poet was already in his sixties, and he was working as a Yin in Henan. His friends were gone, he was weak and sick, so he felt somewhat lonely and deserted.

The word “safety” can be used as a whole The poem’s eyes also established the emotional tone of the whole poem, expressing the poet’s indifference and tranquility in the face of the desolate autumn. Although autumn is always sad, there seems to be a trace of warmth and leisure in such autumn rainy nights, which paves the way for the following to write about the beauty of autumn nights.

The word “late” and the word “beautiful” both express the poet’s “leisure” mentality, calm and peaceful , the beauty of autumn night lies in tranquility and leisure.

“The ashes stay in the warm bottle fire, and the incense adds warmth to the cage.” The neck couplet says, put the water bottle in the ashes of the fire, The water will also be hot; put the incense stick in the quilt, and the quilt will also be warm. This is to write “Heating in Autumn Night”.

The word “gray house” means “the fuel in the drying bottle has turned to ashes overnight”, which is the same as the above “sleep The word “beauty” echoes.

“Xiao Qing Han has not yet risen, and the frosty leaves are full of red.” Not wanting to get up, I saw red frost leaves on the stone steps outside the window. This is to write “The Poet’s State of Mind”.

The word “cold” not only explains The old man “I” didn’t get up, and explained why “I” was afraid of the cold because of old age and frailty. At the same time, the word “cold” implicitly reflected the poet’s discouragement in politics and loneliness and idleness in life.

“Frost leaves are full of red”, saying that the autumn wind and autumn rain deepened the meaning of “cold” at night, yesterday was still “frost leaves are as red as February flowers” The leaves of the trees were “swept by the autumn wind overnight” and filled the stone steps. The poet expresses the ruthlessness of nature by means of contrast. Trees are still like this, how can people be embarrassed? However, the “old man” is “before dawn and cold”, and he is indifferent to it, allowing it to be “red with frost and leaves”, which also shows that the poet’s mood has returned to tranquility and indifference.

Looking at the whole poem, the language is natural and unadorned, and a quiet picture of autumn sleep vividly appears on the paper. The image is lifelike and full of life. Good article.