For a 10-year-old child, the lifelong sequelae of a cerebral infarction cannot be tolerated by the entire family.

Recently, the Department of Neurology of Xiangyang Central Hospital admitted a “worrying” child, a 10-year-old with a sudden cerebral infarction.

According to Liu Xuan, deputy director of the Department of Neurology, at about 6 am on September 15, the child suddenly became weak on one side of the body during breakfast, slurred his speech, and was accompanied by a temporary disturbance of consciousness.

To make matters even more difficult, the child was admitted to the hospital already missing the prime time for treatment. “The child was first sent to a secondary hospital in the living area, or was not further treated due to medical conditions, and was referred through 120 emergency treatment.” Dr. Liu Xuan told the “medical community” that when he arrived at Xiangyang Central Hospital, he had already It was 2:42 pm – more than 8 hours after onset.

Routinely, patients with acute ischemic stroke can be treated with thrombolytic therapy within 4.5 hours of onset. Drugs are injected into blood vessels to promote thrombolysis. Once the thrombolysis time window is exceeded, but within 6 hours after the onset of the disease, interventional therapy, that is, minimally invasive surgery to remove the thrombus and dredge the blood vessels, can be considered.

At this time, the thrombolytic therapy could not be carried out due to the time window, and the question of whether to perform thrombectomy by surgery was before the stroke team of the neurology department. Clinically, for patients with an onset time of more than 6 hours, it is necessary to specifically evaluate whether the patient still has the value of thrombectomy according to the core infarct area and the level of the penumbra.

“The core infarct area of ​​the child’s brain is large, and thrombectomy may face the risk of cerebral hemorrhage transformation.” Dr. Liu Xuan said. Another way is to take conservative treatment, but the blood vessels are not dredged in time, large-scale cerebral infarction, cerebral edema, children may face serious life-long sequelae, and the risk of death is also high. 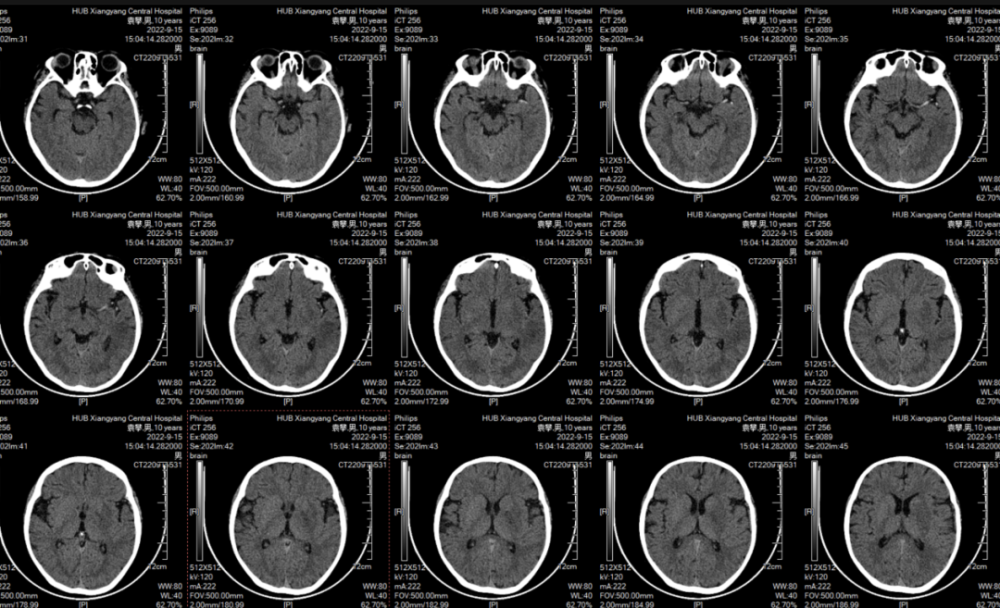 Picture: There was obvious cerebral infarction in the left cerebral hemisphere before surgery

There is not much time left for the doctor to consider. Stroke treatment is highly time-dependent. For every minute of delay, patients will lose 190 million neurons and 13.8 billion synapses.

Dr. Liu Xuan introduced that after the child was admitted to the hospital, the hospital started the stroke green channel immediately, and the emergency department gave priority to the child’s imaging examination, the stroke team intervened, CT plain scan, perfusion scan (CTP) and angiography (CTA), “We assessed that there was still brain tissue that could be rescued by thrombectomy in the vicinity of the cerebral infarction.

More importantly, for a 10-year-old child, the lifelong sequelae of a cerebral infarction cannot be tolerated by the entire family. After fully communicating with the family and informing the pros and cons of the operation, Liu Xuan and the stroke team decided to perform endovascular interventional thrombectomy immediately.

At 3:20, the child was taken to the dedicated neurology cath lab, and the treatment team was ready. Skin preparation, body positioning, towel laying, disinfection, and puncturing of the guide wire catheter. The neurological intervention team used the thrombectomy stent combined with the intermediate catheter aspiration to remove multiple dark red thrombi from the occluded blood vessel. After two stent thrombectomy and aspiration , about 2 hours later, the operation was successfully completed, and the re-examination angiography showed that the occluded blood vessels were completely recanalized.

“The postoperative situation also showed that the decision to remove the thrombectomy was correct.” Dr. Liu Xuan introduced that the child quickly regained consciousness. During the perioperative period, the muscle strength of the lower extremity hemiplegia returned to 4 “This means his athleticism won’t be affected much in the future.”

To further consider the cause of the cerebral infarction, Dr. Liu Xuan introduced that the child had congenital heart disease and received heart surgery at the age of 5, which was presumed to be caused by cardioembolism.

Over half of patients,

According to the “China Cardiovascular Health and Disease Report 2021”, there are about 13 million stroke patients in my country. Another data showed that the prevalence of stroke among people aged 40 and over increased from 1.89% in 2012 to 2.58% in 2019.

“The volume of thrombolysis and thrombectomy in our hospital last year was about 400 cases and nearly 200 cases.” Dr. Liu Xuan told the “medical community” that he applied for the national “advanced stroke” as early as 2018. Center”, Xiangyang Central Hospital began to comprehensively promote the construction of stroke diagnosis and treatment capacity.

In fact, from the time of admission, the guide will identify suspected strokes, give priority to treatment in the emergency department, intervene by the neurology team, and even the road layout of in-hospital imaging equipment, catheterization labs, etc. , each link is crucial for acute stroke patients – whether they can receive standardized treatment in the shortest possible time.

Including sending doctors out for further study, training of stroke nurses, dispatching neurologists to the emergency department, purchasing additional imaging equipment, setting up stroke wards, etc. The average time for thrombolytic therapy is controlled at about 20 minutes. In December 2019, the stroke center of Xiangyang Central Hospital was officially awarded the title of “Advanced Stroke Center” by the National Health Commission’s Brain Prevention Committee.

However, no matter how to improve the green channel in the hospital and shorten the DNT time, what the hospital cannot control is the “pre-hospital time” after the patient’s onset. Many experts, including Dr. Liu Xuan, have estimated to the “medical community” that at least 50% of patients have missed the 4.5-hour prime time for thrombolysis when they are admitted to the hospital. all have.

On the one hand, part of the time was delayed in referrals. “The anti-risk ability of primary medical institutions is low. For some patients with complex conditions, or unable to carry out treatment, and some cases that can be treated but not fully assured, they often choose to refer to higher-level hospitals.” An expert previously commented on “Medical Medicine” level” indicates.

Therefore, how to improve the stroke treatment capacity of primary medical institutions, carry out standardized thrombolysis, and even thrombectomy, so as to avoid the delay of the second transfer to the clinic? “This requires the relevant health administrative departments in different regions to carry out a more complete top-level design based on the actual situation of the region, including formulating a series of assessment standards,” the expert said.

Another sticking point is public awareness of stroke.

“If the physical symptoms during the acute attack are not too severe, some patients may choose to wait to see if the situation will improve.” According to Dr. Liu Xuan, due to differences in the penetration rate of medical information, Delays are more common in more remote areas than in developed urban centers.

Dr. Liu Xuan re-emphasized that whether patients or their family members can identify the onset of stroke in a timely manner and dial 120 for emergency treatment to quickly enter the diagnosis and treatment process is the key to determining the quality of life of stroke patients.

In 2021, the Chinese Stroke Society officially released the “BE FAST formula” for identifying early symptoms of stroke:

“B” – Balance refers to balance, loss of balance or coordination, sudden onset of difficulty walking.

“F” – Face refers to the face, the face is asymmetrical, and the corners of the mouth are skewed.

“A” – Arms are arms, a sudden feeling of weakness or numbness in the arm, usually on one side of the body.

“S” – Speech refers to language, slurred speech, inability to understand the language of others.

“T” – Time refers to time. The above symptoms indicate a possible stroke. Do not wait for the symptoms to disappear on their own, and immediately call 120 for medical assistance.