Some people find that scratching the skin with a fingernail or blunt instrument will leave such marks☟. Or when the watch or belt is removed, the skin around it may suddenly become red and itchy, resulting in red, swollen, raised marks.

You can even use the skin as a drawing board to draw all kinds of patterns on it.

(candidates do not learn)

Many people often mistakenly think that they are allergic to something.

It usually occurs after vigorous stroking, scratching, or applying pressure to the skin. The most direct manifestation is the appearance of stripes of localized edema or wheals surrounded by flushing. 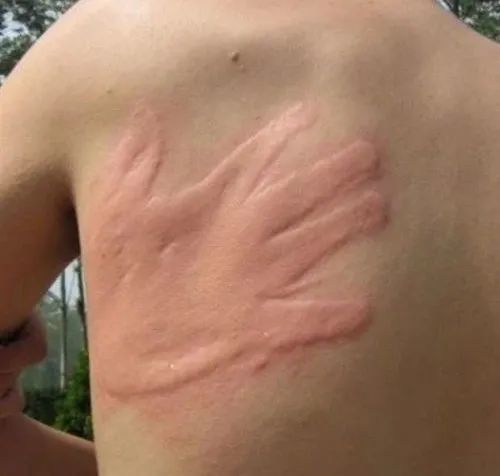 Seeing this, many people have already shouted: I am right! How to treat it? First of all, let’s understand why you have this disease?

The skin is often itchy or hot first, and then a wheal is formed after scratching, scratching or rubbing, which looks like an impromptu relief work if you look closely. 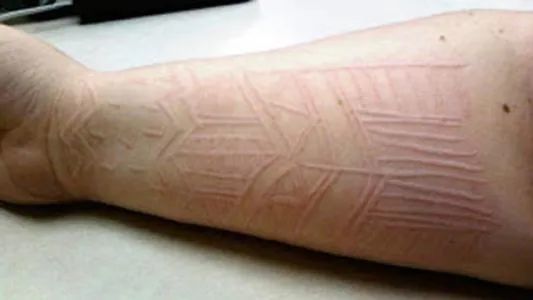 It can occur in people of any age, including children, and there are two main types:

The incidence in the population is 2%-5%, which means that about 5 out of 100 people will develop the disease.

When the skin is physically stimulated, a wheal develops within 6-7 minutes, and begins to subside after 15-30 minutes, mostly without itching or other discomfort, usually considered to be Physiological responses after amplification.

This type of common in young people with allergies usually occurs within 5 minutes and lasts for 30 minutes. Not only will the affected skin appear typical erythema wheals, There is also itching, and inflammation and swelling may also occur.

It is mainly due to the allergic reaction of the skin after being physically stimulated by the outside world, causing mast cells to release histamine substances, causing skin capillaries to expand, allowing plasma and tissue fluid to penetrate into the dermis and To.

The disease is usually idiopathic and has no definite stimulatory factors, so the causes are complex.

While most symptoms appear to be caused by intentional scribing, patients are often unaware of the behavior and sometimes dry skin or idiopathic pruritus Makes the patient scratch the skin, which in turn causes skin scratching.

How is it treated?

In the case of non-pruritic uncomplicated skin scratching, generally no treatment is required, just avoid contact with irritants.

If it is symptomatic skin scratching and itching is unbearable, Antihistamines can be used for treatment, such as cetirizine, loratadine, etc. >, if necessary, it can be combined with medication. Generally speaking, the symptoms of most patients can be relieved.

In addition, daily life also needs to do preventive work, try to avoid the use of bath towels; choose comfortable and loose clothes.

If the skin is relatively dry, it is recommended to apply an emollient to moisturise in time after bathing every day to avoid aggravation of the condition.

If you really suffer from artificial urticaria, don’t think it’s fun, just write and draw on the skin at will, art can be pursued, but it’s okay to hurt yourself, after all the human body Histamines are metabolized, and these creations won’t last long in the end.