A century ago, pathologists discovered the link between cancer and stalled cell differentiation, and in general, poorly differentiated tumors tend to be more malignant. This is no exception in childhood tumors, the most representative of which is neuroblastoma.

As the most common extracranial solid tumor of childhood, neuroblastoma remains the leading cause of childhood cancer-related death. Previous studies revealed that the differentiation arrest of neural crest-derived sympathoadrenal lineage cells plays an important role in the development of neuroblastoma, and also explained many biological features of the disease, including cellular heterogeneity. qualitative, mutational spectrum, spontaneous regression, and response to drugs that induce tumor differentiation.

2) Previous studies have suggested that the heterogeneity of neuroblastoma is related to the heterogeneity in the normal development process. In recent years, single-cell/single-nucleus sequencing technology has been used to explore cell lines in tumors. The relationship between and the interconversion of cell types provides help

4) There is still a need to develop treatments for relapsed, high-risk patients, and mesenchymal cells in tumor cells

In the mid-19th century, neuroblastoma was first reported as a childhood tumor by Dalton et al. In the early 20th century, Wright et al. found that neuroblastoma has fibers similar to sympathetic neuron cells, which led to thinking that the disease originated in the nervous system. A series of observational studies led by multiple teams over the following half century laid the foundation for the important idea that neuroblastomas arise from cells of the developing sympatho-adrenal lineage.

With the rapid development of molecular biology techniques, researchers continue to explore the origin of neuroblastoma. The study found that during early embryonic development, neural crest cells migrate distally from the neural tube on the back of the embryo, eventually forming cells of the sympathoadrenal lineage. These neural crest cells are pluripotent progenitor cells, and the cell type they eventually differentiate into is determined by their specific location on the rostro-caudal axis. 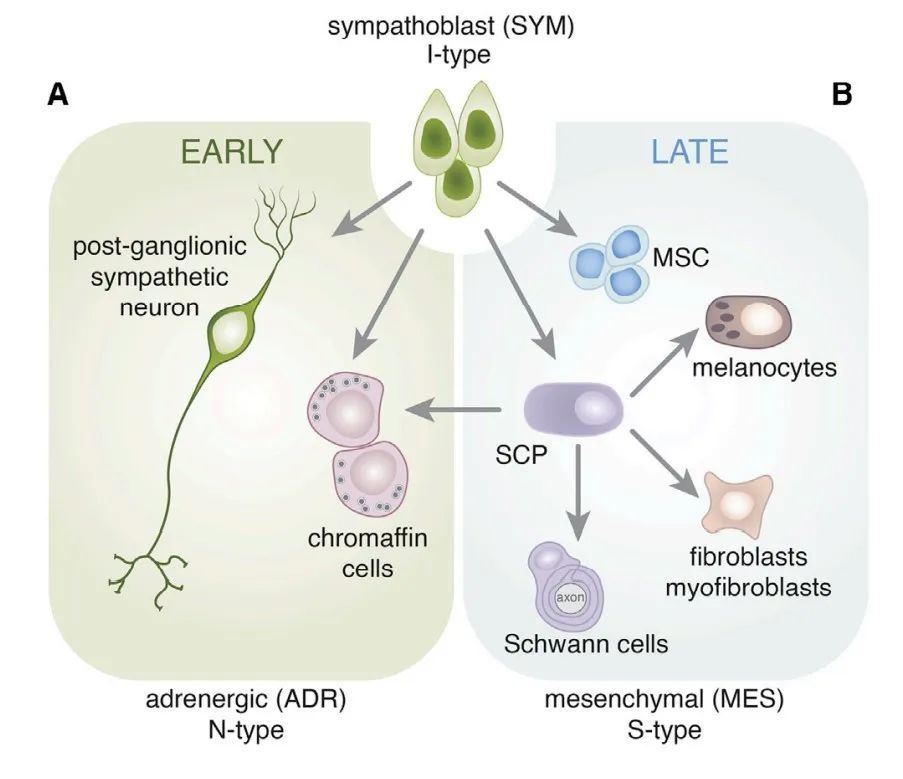 The chromaffin cells in the adrenal medulla are the aforementioned adrenergic cells derived from the neural crest. They do not generate dendrites or axons like other autonomic nerve cells, but directly Secretes neurotransmitters (epinephrine and norepinephrine). Chromoaffin cells are activated by acute exposure to acetylcholine or chronic exposure to pituitary adenylate-cyclase-activating polypeptide (PACAP) encoded by the ADCYAP1 gene. While most neuroblastomas express high levels of catecholamine synthase, some express high levels of PACAP neuropeptide and acetylcholine synthase. Does this difference reflect whether neuroblastoma is of sympathoadrenal lineage cell origin?Or the origin of chromaffin cells is an open question.

In addition to the above-mentioned autonomic nerve cells, sympathetic cells originating from the neural crest can also generate Schwann cell precursors (SCPs). SCPs are a class of multipotent progenitor cells that can differentiate into a variety of cells, including Schwann cells, melanocytes, and mesenchymal cells. Recent studies have suggested that SCPs can cross the developmental boundary between mesenchymal and neural cells, suggesting that chromaffin cells may have two origins, early and late.

2.1 The 2 main cell types in neuroblastoma

Neuroblastoma cell heterogeneity reflects the developmental heterogeneity of sympathoadrenal lineage cells, a finding that was first derived from studies of neuroblastoma cell lines. In the late 20th century, with limited molecular biology technology, researchers discovered that there are at least two cell types in neuroblastoma. Among them, neuron-type cells (N-type) have a nerve fiber structure and can secrete neurotransmitters. Substrate-adherent cells (S-type) cells have morphological characteristics such as flattening and attaching to other cells. Subsequently, it was found that S-type cells have similar gene expression and protein secretion capabilities as non-neural cells (mesenchymal cells) derived from neural crest.

After decades of exploration, researchers have gradually reached the following consensus-

1) Neuroblastoma consists of at least two types of cells

2) Those with neural characteristics are called “neuron-type cells”, N-type, group I, ADR-type

4) In vitro and in vivo experiments have confirmed that the two cell types can be converted into each other under specific culture conditions, which may explain complex biological phenomena such as two sources of chromaffin cells

Despite previous research finding that neuroblastoma cells can be roughly divided into two types, in fact there are still some cells that are difficult to classify by gene expression markers, some of which are Some of them expressed genes from two kinds of cells at the same time, and some expressed hybrid genes of two kinds of cells. At the same time, whether these cells originate from normal transitions in development or are part of tumor tissue is difficult to answer through simple cell classification.

To explore these questions further, multiple research teams have performed single-cell sequencing of neuroblastoma and the developing sympathoadrenal lineage in the embryo. The results of the sequencing research are roughly as follows:

1) Adrenergic cells are present in almost all patients’ tumor tissues, and tumor cells have differentiation characteristics of neural cells

3) The method of identifying tumor cells by copy number analysis is not accurate, but the presence of mesenchymal cells can reflect whether copy number analysis can be used for identification, data quality, and use for tumor annotation Variability of cell calculation methods

However, many questions remain for future exploration:

Gene mutation profiles also provide evidence that neuroblastomas originate from cells with blocked differentiation, of which PHOX2B is the best example. Sympathetic adrenal tissue development requires PHOX2B to activate downstream transcription factors for the next step of cell differentiation, and low expression of PHOX2B in familial neuroblastoma can lead to malignant transformation.

ATRX is the most common recurrent somatic mutation in individuals with chromosomal remodeling and is associated with high disease risk, older age at diagnosis, and poorer prognosis related. ATRX plays an important role in the development of the nervous system, and germline mutations can lead to developmental defects and neuronal cell death. Unlike PHOX2B, ATRX does not lead to increased susceptibility to neuroblastoma, suggesting that other genes are required for tumorigenesis.

Studies have found that ATRX mutations promote tumorigenesis by maintaining alternative lengthening of telomeres (ALT) and blocking neural tissue differentiation. During tumorigenesis, mutations in potential oncogenic genes and tumor suppressor genes usually cooperate, but in neuroblastoma, potential oncogenic genes (such as MYCN) and tumor suppressor genes (ATRX) do not cooperate with each other.

Despite the overall poor prognosis, neuroblastoma has one of the highest rates of spontaneous regression of tumors, with the majority of spontaneous regression occurring in patients younger than 18 months of age. Mechanisms of spontaneous regression have also been explored, including: loss of paracrine signaling, failure to maintain telomeres, immune rejection, and epigenetic activation of sympathetic differentiation. Such as NTRK-related pathways. Neonatal patients with high NTRK1 expression have tumors that grow for a period of time in the presence of NGF, but spontaneously regress as NGF decreases; in contrast, NTRK2-mediated BDNF signaling occurs in MYCN amplification and prognostic poor patients. Abnormal developmental pathways mediated by the NTRK family in patients may be associated with disease heterogeneity in patients at different ages at diagnosis.

Since some ‘patients’ tumors may have spontaneously regressed before diagnosis, the researchers believe that the actual rate of spontaneous regression is higher than currently observed. In addition, spontaneous regression may be related to the different differentiation directions of Schwann cell precursors (SCPs) at different stages (refer to the above “Biological differentiation of sympathetic nerve cells into two types of neuroblastoma cells”). Learning Potential” diagram).

3.2 The therapeutic effect of “induced differentiation”

So far, retino acid (RA, also known as retinoic acid) is still the most effective drug for inducing neuroblastoma differentiation in vitro and in vivo. 13-trans retinoic acid (a retinoic acid derivative) quickly entered clinical trials and has become one of the standard treatments for neuroblastoma.

Due to the characteristic of neuroblastoma cells to take up catecholamines and their metabolites, as a catecholamine analogue, meta-iodobenzylguanidine (MIBG) has also been applied to neuroblastoma cells Diagnosis and treatment of tumors: 131I-MIBG with a half-life of 8 days is used for treatment, and 123I-MIBG with a half-life of 13 hours is used for diagnosis. Currently, MIBG has been used to treat recurrent neuroblastoma, and the treatment for high-risk patients is in the experimental stage.

However, current treatment modalities can only cover some children with neuroblastoma, and anti-GD2 immunotherapy and MIBG only target neuroblastoma cells with an adrenergic (ADR) phenotype For tumors, RA can only be used to induce differentiation block, and there is no specific therapy for tumor parts such as mesenchymal cells (MES). The future should focus on developing different therapies based on the heterogeneity of neuroblastoma, and using the differentiation of sympathoadrenal tissue and the relationship between cells of different lineages in clinical practice.

In recent years, more in-depth genetic research has helped to clarify the specific cellular composition of tumor tissue before and after treatment, but for those cells that play an important role in treatment escape and disease recurrence The phenotype remains poorly understood. Single-cell sequencing/single-nucleus sequencing technology offers new hope for exploration in this field, and researchers are beginning to understand these cells mentioned above and discover that their behavior may be similar to that of one of the two cell types in neuroblastoma. conversion between.

In addition, emerging research techniques and research methods are contributing to a greater understanding of neuroblastoma recurrence mechanisms and biological indicators that can predict tumor behavior and/or treatment response. The overall survival rate of patients with recurrent neuroblastoma is still less than 10%, enough to see that this part of the research and exploration is crucial.

Overall,despite the tremendous progress in neuroblastoma research over the past 30 years, there are still, for example, interconversion of different cell types in neuroblastoma A series of problems need to be solved urgently, such as the mechanism of tumor growth, the source of disease heterogeneity, the development of drugs targeting mesenchymal cells in tumor tissue, and effective treatment measures for recurrence and high-risk patients. In addition, maintaining a scientific review of research methods in the rapidly developing research technology, it is also crucial to have an in-depth understanding of the differentiation of sympathetic adrenal tissue and the relationship between cells of different lineages in clinical practice.