This article is edited with 3948words, estimated reading time, 8 minutes.

Caloric restriction (CR) prolongs life, which has long been a belief of many people, including me. 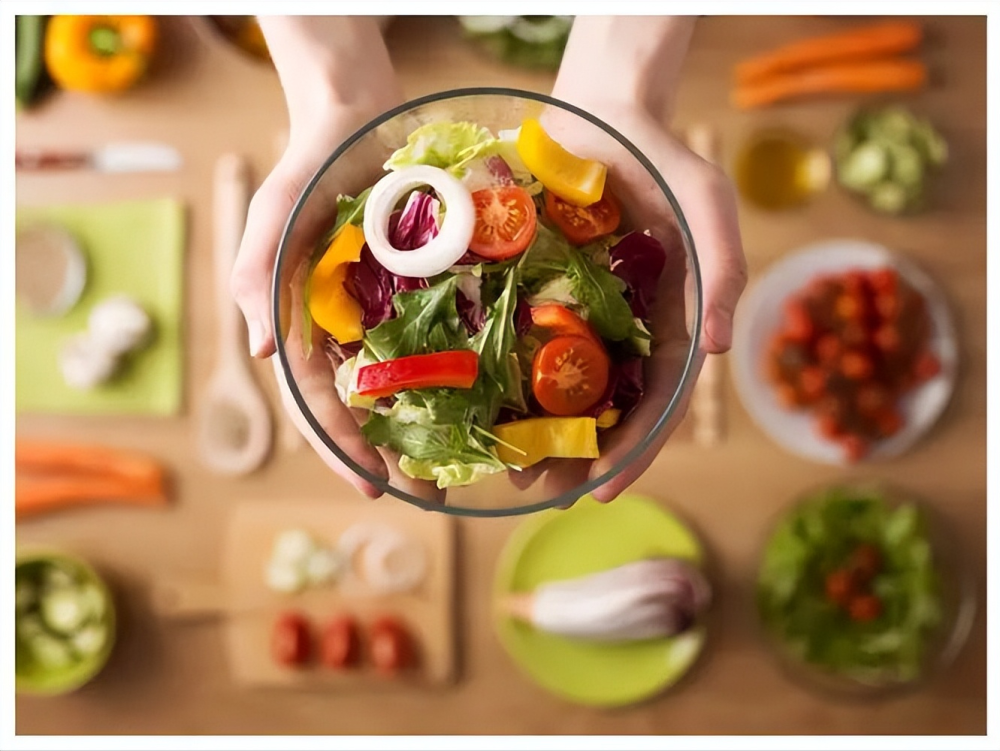 However, a new study finds that calorie restriction is good for monkeys’ health, but it does not prolong their lifespan.

This study was not done by any amateur medical institution, but rather a professional experiment by the National Institute on Aging (NIA).

Is it wrong all along? Calorie restriction CR really doesn’t prolong life?

The most convincing so far is the University of Wisconsin (UW) study, which shows that CR can prolong life.

So, why come to different conclusions?

When we compare the two studies, they prove the same thing, it just depends on how we understand it.

The Wall Street Journal reported on the NIA study and reviewed previous experiments showing that CR can extend lifespan, arguing that the conclusions of the previous studies were not clear.

→What did the NIA study conclude?

The subjects of both the NIA study and the UW study were rhesus monkeys. On the one hand, because the rhesus monkeys share about 93% sequence identity with the human genome, Anatomy and physiology etc. are also very similar. 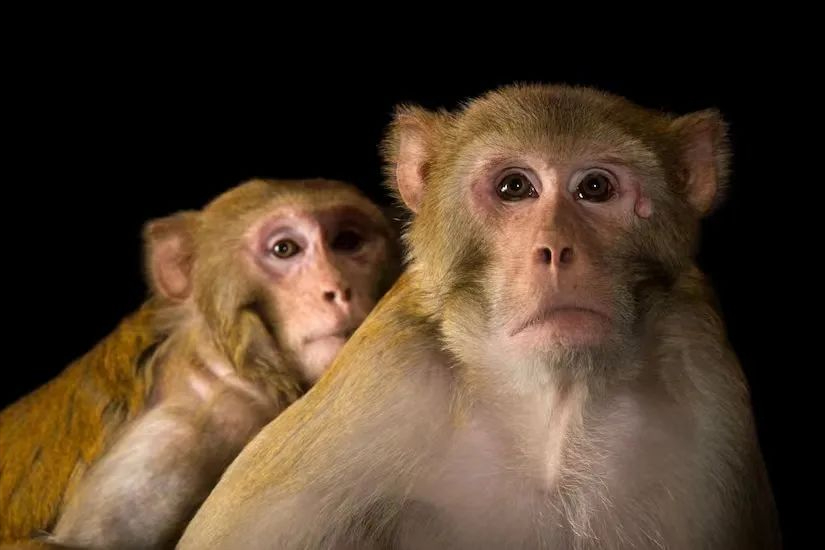 On the other hand, calorie restriction and control experiments on humans are not only ethical, it takes about 80 years to track natural death, and the average lifespan of rhesus monkeys is 30 years.

In fact, both experiments tracked natural death of rhesus monkeys, so they lasted longer; and both had control groups.

2. Each group of monkeys is divided into a control group (CON) and a restricted group (CR), the CR group is fed 30% less than usual, while the CON group is free;

3. Compare survival data and mortality between CR and two groups of control monkeys fed a diet closer to normal.

It can be said that NIA’s experiments are very scientific and objective, excluding the influence of variables such as age, gender, disease,It was concluded that none of the calorie-restricted CR monkeys lived longer than the control group CON monkeys.

Look at the previous study by the University of Wisconsin (UW), which was carried out at almost the same time as NIA, and the end time was similar. It was also a rhesus monkey experiment, and set up a CR group and a control group.

UW is a professional scientific research institution. In their experimental conclusions, it is not concluded that CR extends the lifespan of rhesus monkeys, but that CRreduces mortality and morbidity rate.

Perhaps the media’s understanding was different, or the CR-related research was more eye-catching and quickly made headlines in the media. Interestingly, it was also in the Wall Street Journal at the time. report.

UW’s experiments do not need to go into details. The biggest difference between them and NIA is the age (all adults) and food of the monkeys. Other processes and monitoring results are similar. Meanwhile, CR delays the onset of age-related pathologies, including the incidence of diabetes, cancer, cardiovascular disease, and brain atrophy.

UW and NIA, why are there different conclusions?

So, why is CR extending the lifespan of rhesus monkeys in media reports and self-media popularization? In fact, it has to do with the different understanding of life extension.

Suffice to say, both UW and NIA studies have demonstrated that CR extends monkey lifespan, but median lifespan to be precise.

Median lifespan or median survival time refers to the average lifespan of the remaining monkeys when 50% of all monkeys in the group die.

For ease of understanding, we can look at an exaggerated example, such as the normal median lifespan of monkeys is 30 years, while the CR group is 25 years, and the CON group is 20 years.

In this case, it is true to say that CR extends median lifespan over CON, but both shortens compared to normal.

Of course this is just an exaggeration, the average age of rhesus monkeys is about 27 years, and the median lifespan of CR and CON monkeys in the UW experiment was 28 and 26, respectively. 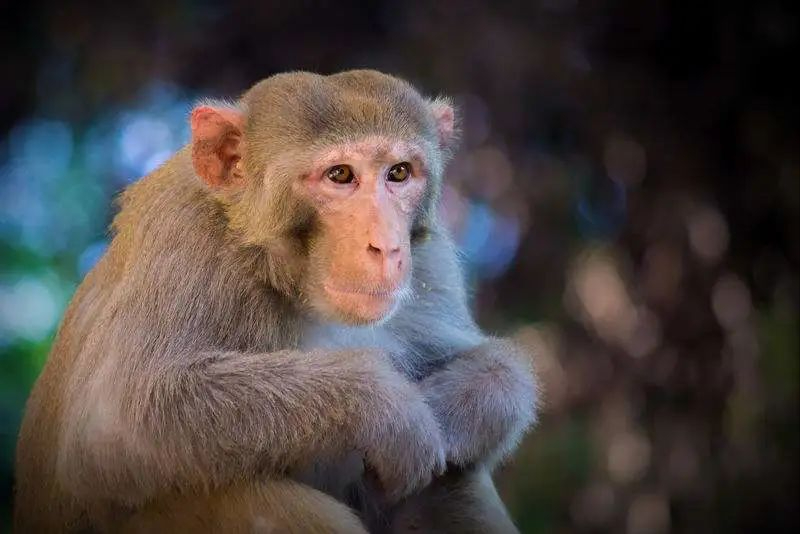 Then a new question arises, why did the uncontrolled control group have a longer median lifespan than normal monkeys? Even more than the CR group of the UW experiment?

Many scholars are also very puzzled about NIA and have put forward various inferences. At present, there are three more reasonable ones:

One ​​is that there is a big difference in diet between the two experimental monkeys.

UW fed both groups of monkeys a diet that more closely resembled a human diet and was fast food restaurant food such as burgers, fries, happy water.

But the monkeys in the NIA experiment ate more natural, mainly wheat, corn, soybean, tuna, and alfalfa meal, etc. Both groups were given some oil. The natural diet of rhesus monkeys includes roots, fruits, seeds and bark, as well as insects and small animals. There is no doubt that NIA monkeys eat foods that are closer to natural feeding.

The second important difference is the feeding amount. Although both experiments planned for the CON group to be fed ad libitum, in practice the total amount of food consumed by the NIA experimental monkeys was capped.

One ​​piece of evidence is the average weight of the monkeys.

Not only were there significant differences in body weight between the control groups in both studies, but the NIA monkeys also weighed less than the natural captive monkeys. (above: UW and NIA male and female body weights↑)

So a generally accepted explanation is that the control animals in the NIA study were actually restricted, albeit further restricted in the CR group, but by a small margin.

80% of the elderly individuals who survived to the age of 40 years or older in NIA were from the CR group, indicating that CR has a certain effect, but it is not enough to exceed the mildly restricted advantage of CON. 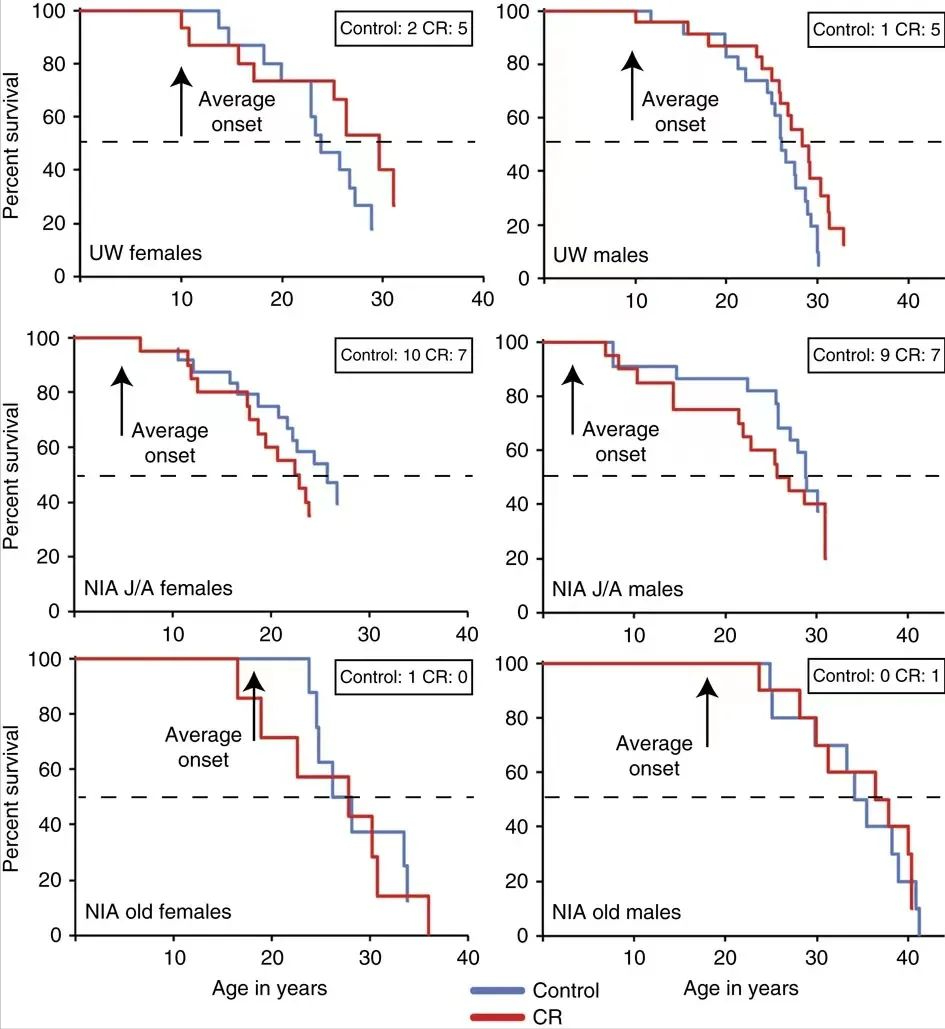 (Above: Mortality curves for UW and NIA monkeys ↑)

As predicted by the delayed aging model, the effect of CR on all-cause survival was only evident at older age. And the number of CR monkeys currently surviving is twice that of the CON group, and the effect may not stop.

What does the study tell us?

Compare the studies to see if the researchers found common conclusions.

→What is the common conclusion of the two studies?

Both the UW and NIA studies found that a variety of aging-related diseases had a later onset in the CR group, and multiple metabolic health and overall function Indicators have improved.

The first is weight. Both male and female CR groups weighed less than the CON group, although this was more evident in the UW study, where their CON group was significantly overweight Level.

Secondly, health-related indicators in the CR group decreased. Such as triglyceride, cholesterol and glucose levels, which means that the CR group is less likely to develop cardiovascular disease, etc. 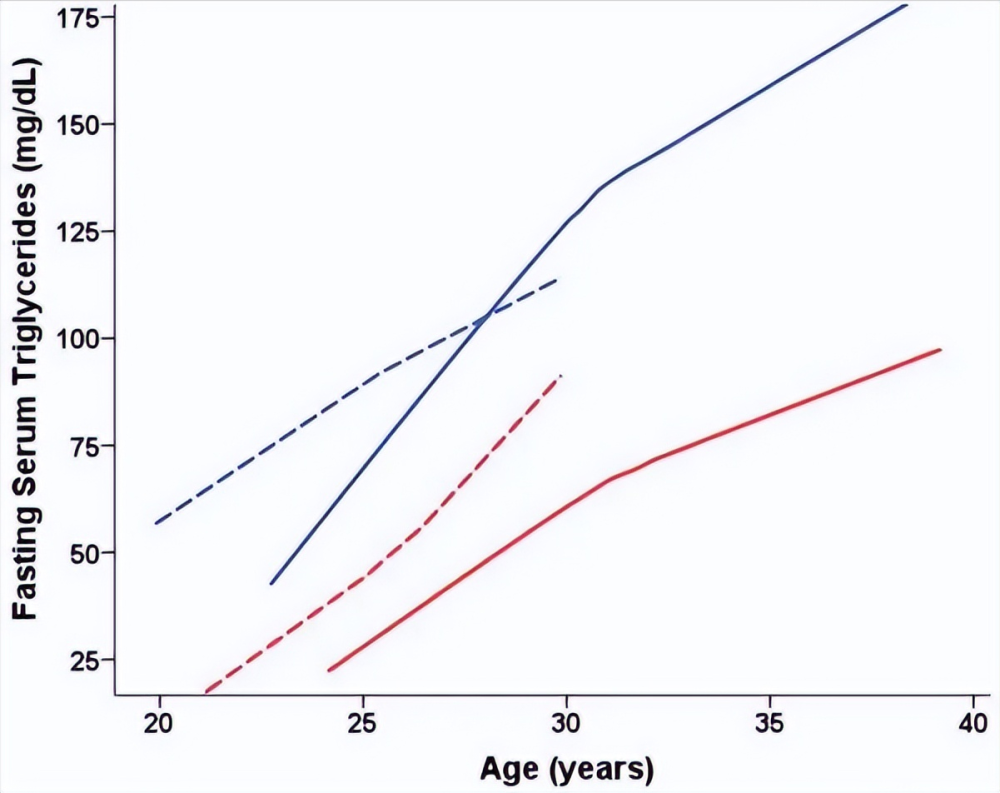 (above: fasting serum triglycerides ↑ in CR and CON monkeys)

ButAgain, these effects were more pronounced in the UW study. For example, mortality from age-related causes was 24% lower in CR-13% than CON-37%.

Comparisons between these two studies may provide insight into how caloric restriction really works.

There is clear evidence in various biological studies as well as human studies that CR increases healthy lifespan.

Without diet control, even total calorie restriction will not help.

The monkeys in the NIA study had a diet low in corn and sugar, but high in protein and fat. UW research is the opposite, basically how to be unhealthy.

As a result, both the NIA control group lived longer than the restricted group in the UW study.

Some students may have been dizzy. The results of these two experiments are indeed a bit confusing. I will try to summarize them for you.

To sum up, there are two things: First, our previous understanding of CR prolonging lifespan was wrong. The UW study actually proved that the median lifespan was prolonged. From this perspective Research is no problem.

The second is the NIA study. The abnormal results may be related to the fact that the control group is not truly free to feed. caloric restriction CR.

Both studies are fine on their own, but the comparison is interesting: the NIA study was much healthier than the UW study of monkeys, but adjusted for diet Is it that different?

The answer is yes.

The monkeys in the UW study ate junk food every day. Although the CR group had been controlled to eat less, it still had a shorter lifespan than the monkeys on a healthy diet.

Everyone hopes that there is a way to improve health and prolong life, but the facts tell us that no matter how good the way is, we can’t bear the high sugar intake every day.

Controlling calories will certainly reduce the risk of chronic diseases and other diseases.

But only if you eat enough nutrients and stick to a healthy diet, not junk food every day.