Patients with no obvious incentives in the past 1 year have chest pains Back pain, dull pain, slightly aggravated by rib compression, no chest tightness, wheezing, no cough and expectoration, etc. The symptoms have worsened in the past 1 month. The pain was aggravated, VAS 7-8 points, no skin tingling, no hypersensitivity. The chest CT showed no obvious abnormality, EKG (-), and thoracic X-ray showed no obvious fracture, and the bone mineral density showed T: -4.3. Physical examination: thoracic paravertebral tenderness (-), vertebral percussion pain (-). 4th sternocostal joint tenderness (+). 2019-8-27 Ultrasound-guided right sternocostal joint block + right intercostal nerve anterior cutaneous branch block was performed. Immediately after the operation, the pain of the patient was significantly reduced, the VAS score was 1-2 points, and the activities such as twisting the body were not restricted. Afterwards, intravenous bisphosphonates were given to treat osteoporosis. After 2 weeks, the outpatient follow-up was performed, and the pain did not recur.

2-6 intercostal space The nerve travels in the corresponding intercostal space, along with the intercostal blood vessels, and migrates near the sternum to become the anterior cutaneous branch of the intercostal nerve, which penetrates the intercostal and pectoralis major muscles vertically in front of the parasternal internal thoracic artery to the subcutaneous , divided into a thinner medial branch and a thicker lateral branch, which innervate the chest skin on the inner side of the nipple. 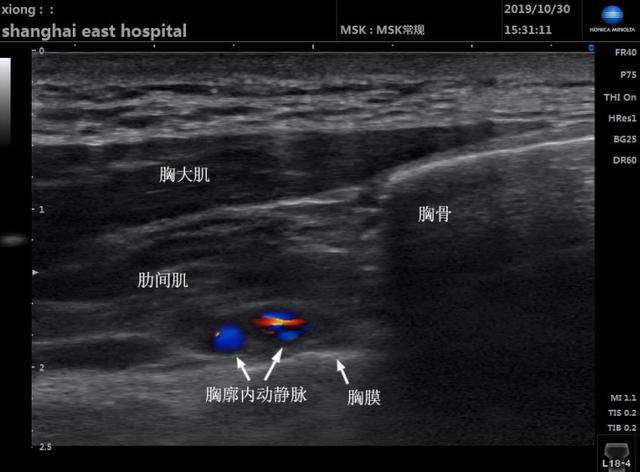