Tencent News Jiuzhen platform released the list of the hottest rumors in September. Come and see which rumors have you believed in the past month?

Correct interpretation: These marks are not bruises, but Mongolian spots, a type of birthmark that is common among yellow people and usually disappears by preschool age. The vast majority of twins are not in contact with them in the womb, and the fetuses cannot control their hands and feet very well. The stretches and kicks they make in the womb are unconscious behaviors, not fighting.

Correct interpretation: Nucleic acid sampling swabs do not cause related cancers. The occurrence and development of most cancers are the result of multiple factors and multiple steps, and nasopharyngeal cancer, oral cancer, and laryngeal cancer are no exception. The nasopharynx, nasal cavity, oropharynx and other mucosal defense systems are strong, and standardized operations generally do not cause mucosal damage. If there is damage, it usually repairs itself.

Correct interpretation: After investigation, this is an old picture. Spread as early as 2013. And at that time, some netizens pointed out that this was “an advertisement for a paraglider in Chongqing”. Therefore, it has nothing to do with the earthquake in Ganzi, Sichuan, and “Chengdu men escape by parachuting” is pure nonsense.

Rumour 5: Video: Mosquito No. 38 appears in Russia as a US biological weapon

Correct interpretation: The insect in the video is not a mosquito, but a kind of aphid. This aphid feeds on plants and randomly grows black patterns on the back. It is not artificially numbered, and it is not The so-called American bioweapons.

Rumour 6: Sichuan Ganzi Earthquake, man’s house collapsed when he went to the toilet and sent video for help

Correct interpretation: The circulating video appeared on a social platform in May 2019 or earlier, which obviously has nothing to do with the earthquake.

Rumour 7: Mosquito bites look at blood type, blood type O is the most likely to be bitten

Correct interpretation: There is a small amount of literature that some specific species of mosquitoes have more obvious tropism for certain types of blood, but the experimental design and sample of these research literatures The selection range has certain limitations and does not have sufficient universality. Therefore, ordinary people do not need to pay special attention to whether their blood type attracts mosquitoes.

Myth 8: The probiotics in yogurt are extracted directly from human feces

Correct interpretation: “Probiotics from the intestines of centenarians” are more of a marketing tool for manufacturers. Probiotic strains extracted from feces cannot be directly applied, but must be isolated and screened , culture, fermentation, concentration and freeze-drying, etc., can be commercialized, become probiotic products we eat, or add to various foods.

Rumour No. 9: Picture: The earthquake in Ganzi, Sichuan shook out the private property money

Correct interpretation: This is also an old picture, basically every earthquake someone posts it on social media. As early as October 2019, this picture has appeared on social media, and it has nothing to do with the earthquake in Ganzi, Sichuan.

Get it right: This is fake news. The picture of the poster that circulated “being fanned to the tongue” came from another news. The original news did not mention the matter of the researchers hitting the seal, and the photographer was not the so-called “Dr. Guderian”, but St. Andrews in the United Kingdom. Dr. Russ Bohm of the University of Sri Lanka, in his reply, mentioned that scientists cannot approach seals at will, and slapping seals will forever be banned from doing animal-related research. 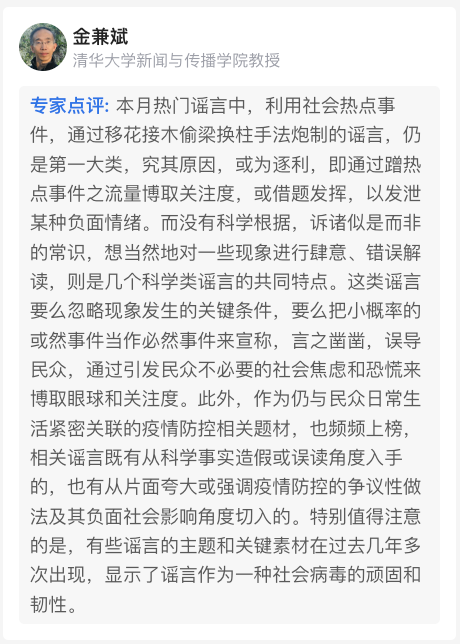 Copyright Statement: This article is a copyright manuscript of Tencent Xianzhen. Reprinting is prohibited without authorization. Individuals are welcome to forward to the circle of friends and family groups.