Sino-Singapore Jingwei, August 9th. According to the Xiamen Center for Disease Control and Prevention, on the 9th, Xiamen reported 3 new confirmed cases, all of which have been closed-loop transfer. Among them, case 1 is a closed-loop management staff; case 2 is a field assistant investigator, whose trajectory involves pedicure rooms, photo studios, etc.; case 3 is found during routine nucleic acid testing of key populations.

Sino-Singapore Jingwei observed that many scenic spots such as Xiamen Gulangyu issued a notice of closing the park.

The WeChat account of “Tong’an Tourism” stated that Tong’an Film and Television City and Xiamen Beichen Mountain Scenic Area will be closed at 12:00 on August 9, 2022 for rectification and improvement. The opening time will be notified separately. Refunds will be made through the original ticket purchase channel. 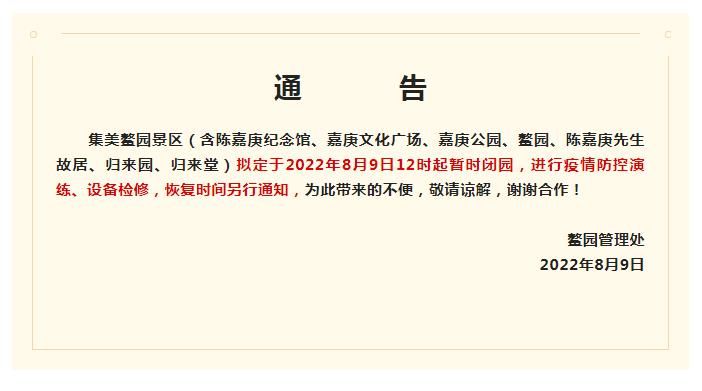 The WeChat account of “Xiamen Tianzhu Mountain” stated that, following the notification from the superior, Xiamen Tianzhu Mountain Scenic Spot plans to organize epidemic prevention and control drills , the scenic spot is scheduled to be temporarily closed from 12:00 noon today (Tuesday, August 9). The amusement projects in the park will be closed simultaneously, and tourists who have purchased tickets can apply for a refund through the original ticket purchase channel. 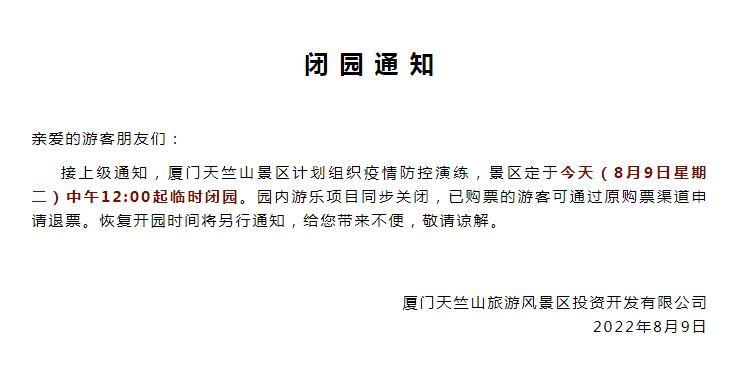